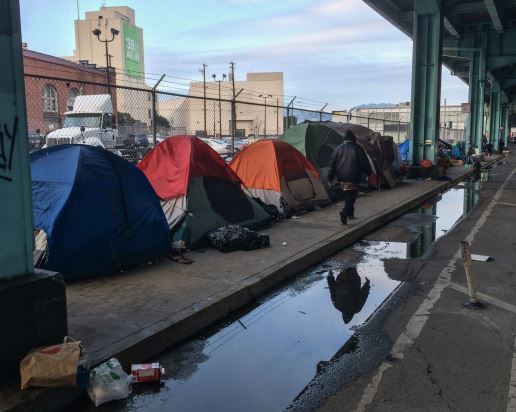 It was easy to miss among its other endorsements, but on September 9 the San Francisco Chronicle recommended a No vote on Prop Q, Supervisor Mark Farrell’s so-called camping ban. That a newspaper long allied with the Chamber of Commerce and other backers of Prop Q opposes the measure sends a powerful message. If not a game changer, it offers the strongest hope yet that this counterproductive measure could be defeated.

As the Chronicle points out, Farrell’s plan “is more about frustration and political symbolism than ending the camps.” Frustration easily drives bad policies. In this case, Prop Q actually worsens the problem Farrell and his backers seek to correct.

I make this point not out of a political strategy that seeks to defeat initiatives by saying they will make the problem sought to be solved worse (e.g. claims that rent control will raise rents, a tobacco tax makes us less healthy, or that more public transit encourages driving). If a ballot measure were needed to more quickly close encampments, I would be all for it.

But, as the Chronicle concluded, Prop Q “needs a reality check. The sidewalk move-along order hinges on finding a bed in the city’s oversubscribed shelters. If there’s no slot available, then the 24-hour notice to leave won’t take effect.”

Whereas police can now close down encampments without prior notice, Prop Q gives campers 24 hour notice before they and their tents can be removed. It then adds to the police burden by conditioning  removal on the availability of shelter slots.

Think about how Prop Q will work.

Neighbors ask police to close down an encampment. Police give the 24 hours’ notice required by Prop Q, They return in 24 hours and tell campers to leave. Some campers say they never got the notice. Others say they didn’t get an offer of shelter or they didn’t feel the shelter they were offered was safe.

Will city officials file proof of service documents with the court to confirm their delivery of Prop Q notices to campers? If not, it’s the campers word against the officers.  And given longstanding disputes between city officials and the Coalition on Homelessness over shelter availability, similar legal problems will surround the removal of campers who allegedly turned down available shelter space.

Prop Q will draw voluntary attorneys willing to go to court to get a TRO to protect individuals rights under the law. If they prove that Prop Q’s strict requirements were not met, neighbors are stuck dealing with the encampment indefinitely.

Think of the hours, days and ultimately weeks and months city outreach workers, police officers, shelter staff and city attorneys will be spending to resolve disputes over closing encampments under Prop Q. We need our Tenderloin police officers on the sidewalks busting drug dealers, not sitting in court waiting to testify in Prop Q cases.

And Prop Q’s implications get even worse.

Once a court finds that a camper was removed without Prop Q’s requirements being met, the camper could be entitled to damages from the city and their attorneys could win a large fee award. Neither occurs under current law. So why in the world would the city want to create a new financial liability by passing Prop Q?

Talk about an employment act for lawyers!

Here’s another likely scenario. Campers get the Prop Q notice, and police find the next day that campers have moved 25 yards away from their prior “location.” A new Prop Q notice is then issued, and the process repeats itself.

Once again, if police try to uproot these campers on the grounds that 25 yards away is not a different “location,”  attorneys representing campers will tie the matter up in court. Neighbors will have no ability to close the encampment anytime soon.

If David Campos or John Avalos put such a counterproductive encampment proposal on the ballot, the Chamber and business interests behind Prop Q would be making the arguments I am making now.  But Farrell’s sponsorship has confused the  fact that Prop Q creates costly and unnecessary due process barriers to facilitate illegal and unhealthy camping on San Francisco sidewalks.

I’ve been around for every San Francisco ballot measure claiming to address homelessness, panhandling or “problem street behavior.” They are very difficult to defeat because, as the Chronicle No on Q editorial notes, “voters may want to send a message by approving this plan.”

I wish I could say that voters will readily figure out Prop Q’s flaws. But with 24 local and 17 state measures on the ballot along with a huge number of candidate races, most voters will simply read the title— “Ordinance Amending the Police Code to prohibit tent encampments on public sidewalks—and quickly vote Yes on Q.

That’s why the Chronicle’s opposition could be a game changer. At the least it should require Supervisors and business groups backing Prop Q to take a closer look. When they take that look, and talk off the record to police officers, they should conclude that Prop Q was a well-intentioned mistake. A mistake that imposes major legal and bureaucratic hurdles to stopping tent encampments on public sidewalks.

Some may ask why homeless advocates oppose Prop Q if it actually makes it harder to close encampments. It’s likely because many advocates resent attacks on the right to camp and oppose the messaging and tone of the Yes on Q campaign.

Prop Q undermines Kositsky’s plan. And if Prop Q passes and it plays out as I project, the Board of Supervisors has no ability to correct it.

I’ll leave the last word on Prop Q’s fatal flaws to the SF Chronicle: “But if it wins, there isn’t likely to be a visible result with fewer camps. The persistent problem will continue, leading supporters of Prop. Q to wonder what they accomplished. Vote NO.”

Randy Shaw is Editor of Beyond Chron. He is the Director of the Tenderloin Housing Clinic, the city’s leading provider of supportive housing to homeless single adults.