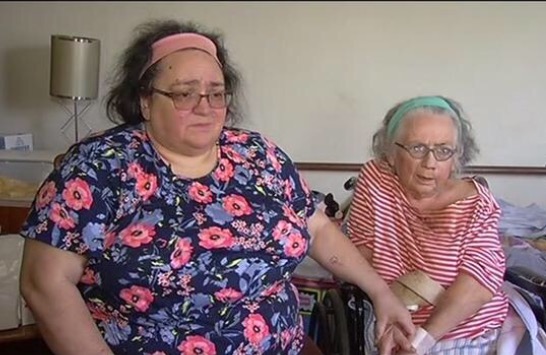 In December 2014, Tariq Hilaly, a Harvard Business School graduate and CEO of Lumity, Inc., his wife, and his parents purchased two large buildings located on one lot in Noe Valley. Tariq Hilaly and his family paid a mere $1,500,000, an amount far below market value. The selling price reflected the low rents and the two sets of protected status tenants residing in 1642-1644 Church Street. Soon after purchasing the property, Tariq Hilaly and his wife evicted the tenants residing in 208 Valley Street and the protected tenants (senior and disabled) from 1644 Church Street.

On March 17, 2016, several months after evicting the other two households, serial evictor Tariq Hilaly watched Beatriz Allen, a catastrophically ill 81 year-old taken away by ambulance from her home located at 1642 Church Street. One week later, on March 24, 2106, Tariq Hilaly and his wife served Beatriz and her daughter, Betty Rose Allen, with a 60-day notice to vacate their home of 38 years based on “alleged” owner-relative move-in.

Beatriz’s story is emblematic of how unchecked greed is tearing apart San Francisco neighborhoods. It has a terribly negative impact on tenants, especially frail elders, like Beatriz and her former neighbors, Pam and Larry Gutierrez, who resided in 1644 Church Street for 34 years.

Part of the Noe Valley Fabric

Prior to having three strokes, which left Beatriz’s paralyzed (entire left side of the body) and confined to a wheel chair, Beatriz poured her soul into caring for children in Noe Valley, happily working as a “house parent.”  For the bulk of twenty-five (25) years, Beatriz worked at Teresa Mahler Pre-School located at 22nd and Church Street, which serves low-income, single-parent families.

Beatriz has paralysis of her entire left side of her body as a result of three strokes. Beatriz also suffers from other health issues, including persistent anemia requiring occasional blood transfusions.  Her doctor, who practices at St. Luke’s Hospital, makes “home visits” to provide necessary and vital care to homebound Beatriz.  On March 17, 2016, her doctor during a “home visit” found Beatriz in need of an immediate blood transfusion.  For this reason, Beatriz was taken by ambulance to the hospital on March 17, 2016.  Sadly, a recent abdominal CT scan showed a large irregular mass in Beatriz’s kidney. Her doctor suspects cancer.  Beatriz’s doctor’ medical opinion is that Beatriz is “catastrophically ill and a move from her current home situation could be extremely detrimental to her heath.”

In addition to being geographically close to St. Luke’s’ hospital, Beatriz’s home is disabled accessible. Beatriz and her daughter Betty Rose spent their own money to install disability accessibility features throughout their home.  These features include handrails along the walls and the 32-step stairwell. They also purchased a special bed for Beatriz to facilitate ingress and egress.

In 2015, serial evictor Tariq Hilaly also evicted Pam and Larry Guiterrez from 1644 Church Street, their home of 34 years. Betty Rose commented that Pam Guiterrez is disabled and 1644 Church Street was also fitted with disability accessibility features similar to 1642 Church Street.  Betty Rose believes that Pam and Larry Guiterrez were pressured into an “under the table” buyout of their thirty-four year tenancies, whereby they  left in about early May 2015.  Betty Rose does not know the exact details, because the two seniors (Gutierrez) signed a non-disclosure agreement.  Since March 7, 2015 buy-out transactions have been regulated under the Rent Ordinance with strict notice, disclosure and filing requirements to protect participating tenants. Apparently, the Gutierrez transaction was under the radar, as there was no buyout notice or agreement filed with the San Francisco Rent Board.

In his online profiles, Tariq Hilaly, a Harvard Business School graduate, is described as Co-Founder and CEO of Lumity, Inc. since 2013, with a history as a Co-Founder and Chief Investment Officer of Motif Investing Inc. and Project Manager with Microsoft. Tariq Hilaly is also described as a former Vice President at Alliance Bernstein’s 1B hedge fund.  Betty Rose recalls that after Pam and Larry Guiterrez  moved out, there was a period of demolition and construction in the 1644 unit, which included removal of the kitchen. Soon, every window in 1644 Church Street had a computer monitor, and over time, a number of different young persons were busy working during the day. After several months, all of the windows were blacked-out with blinds. While there is limited activity in unit 1644 during the day, no one lives there and no one stays overnight.  There is no cooking, cleaning, or bathing taking place in 1644 Church Street.

Neighbors and Betty Rose believe and suspect that a high-tech business is operating out of the formerly residential unit (1644 Church Street). The displaced seniors, including a disabled senior, are rumored to live in a senior-citizen retirement home located in Santa Rosa.

Betty Rose commented that Tariq Hilaly’s mother-in-law, Nahid Parveen, regularly walks around without any assistance and without any cane or crutches.  Betty Rose points out that if Nahid Parveen truly had fallen and now had mobility limitations, serial evictor Tariq Hilaly, would not seek to move his mother-in-law out of 208 Valley Street into 1642 Church Street, which has about three-times as many stairs as 208 Valley Street.  As previously mentioned 1644 Church appears to be used as a tech business office.  Betty Rose suggests that if Tariq Hilaly is tired of living with his mother in law (Nahid Parveen) in 208 Valley Street, he could stop running a business out of 1644 Church Street and move her into that flat.

Raquel Fox is an attorney with the Tenderloin Housing Clinic who represents Beatriz and Betty Rose.