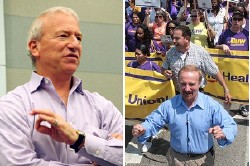 Charging Sal Rosselli and UHW’s leadership with “financial malpractice and efforts to subvert democracy,” SEIU President Andy Stern placed UHW–its third largest local– in trusteeship yesterday. Stern’s action comes a day after UHW announced it was rejecting SEIU’s conditions for avoiding trusteeship. Stern based his decision on three independent grounds, all of which derive from SEIU’s fundamental dispute with UHW over the transfer of 65,000 UHW members to a new statewide longterm care local. UHW members overwhelmingly rejected SEIU’s insistence that the local accept the transfer of these workers, and this refusal was among the grounds cited by Stern for imposing the trusteeship. The climax to the long running SEIU-UHW disputes comes as the nation’s progressives are energized by Barack Obama’s presidency, and opportunities for progressive change and long overdue labor law reform have never been greater. No wonder UHW President Sal Rosselli termed the long running dispute with his parent union as “tragic,” while Stern described his imposing of a trusteeship as “an end to a sad chapter.”

Since March 2008, SEIU and its third largest local, SEIU-UHW, have been headed on a collision course. While the parties claimed to be seeking reconciliation, positions hardened and intensified, emotions took over, and by last week both sides were describing representatives of the other as “thugs.”

SEIU’s imposition of trusteeship means that Rosselli and all of his officers have been immediately removed from their jobs. Regardless of one’s stance in this dispute, this ouster of longtime UHW leadership, which includes some of the nation’s best grassroots organizers, is a sad development for UHW and — since UHW was central to organized labor’s political efforts in California — a blow to progressive politics in the state.

Nobody expects Roselli, UHW officers, or the union’s 150,000 membership to view trusteeship as the end of the fight. Not by a longshot.

The effective organizing and advocacy strategies and tactics that UHW has long used against hospitals and nursing homes will now be employed against SEIU. And the same holds true for SEIU’s use of its highly skilled organizers, many of whom will be dispatched to California to implement the trusteeship.

As Roselli repeatedly pointed out during Monday’s press conference, federal labor law gives international unions tremendous power over their locals. So it’s clear that UHW is not depending on the courts for help, but believes it can win this battle through grassroots pressure.

Roselli signaled one possible tactic when he noted that Nancy Pelosi and George Miller had thousands of UHW members in their districts. Pressure from these constituents could push these powerful political leaders to try to broker a compromise with SEIU, though the persistence of this conflict may show that they are unable or unwilling to intervene.

Stern’s justification for trusteeship seeks to use UHW’s own arguments against them. Consider:

UHW states this is a battle for union democracy? Stern argues that trusteeship is necessary to “end {UHW’s} attempts to subvert the democratic process.”

UHW claims that it has superior bargaining strategies to SEIU? Stern justifies trusteeship as a way to “safeguard the collective bargaining relationships of UHW.”

In response to Stern’s imposition of trusteeship, UHW issued a statement yesterday afternoon describing Stern’s action as equivalent to “declaring martial law against those advocating for the right to vote and democratic principles in their own union.”

UHW also cited it as “doubly ironic, in that Stern has tried to position himself as the leading champion of the Employee Free Choice Act (EFCA) which would give unorganized workers the freedom to choose a union, while he is unwilling to give the members of SEIU a free choice within their union.”

As the SEIU-UHW fight gets nastier, will it impact the national agenda?

Many fear that the SEIU-UHW battle will undermine support for EFCA, organized labor’s top legislative priority. While SEIU representatives have dismissed such concerns, Roselli noted yesterday that, in light of the international’s treatment of UHW, “SEIU members do not have a free choice — there is a contradiction there.”

The traditional national media has provided some coverage of this dispute, but Steven Greenhouse of the New York Times, perhaps the nation’s most respected mainstream labor journalist, has framed it as an internal union fight. Neither the Times nor the Washington Post has cast the battle in the “struggle for union democracy” terms that UHW sees as the essence of the conflict.

Many longtime labor activists are staying out of the fight, not wanting to pick sides. And there has been very little media coverage in local papers outside California, so many progressive activists are not well informed on the dispute.

SEIU’s desire to keep this dispute off the national radar screen is also abetted by the timing. Progressives are focused and mobilizing around Barack Obama’s first 100 days and beyond, making it harder for an internal dispute within SEIU to spark national interest.

This is Only the Beginning

Stern has named Eliseo Medina and Dave Regan as trustees of UHW. Medina attended an SEIU rally around the state budget in Sacramento last Friday, and is likely to continue such public activism in his role as trustee. Like Medina, Regan is an Executive Vice-President of SEIU, reflecting the importance SEIU is placing on ensuring UHW runs smoothly in the months ahead.

But SEIU must know that if faces a major obstacle in its attempt to run UHW under trusteeship: UHW members are intensely loyal and completely committed to their cause. This is not Sal Roselli and some leaders manipulating line workers—this is the union membership rising up and fighting a ground war to preserve their elected leadership.

Those who tried to resolve this dispute short of trusteeship have failed.

And as progressives mobilize to implement real change during Barack Obama’s first 100 days, SEIU and UHW are locked in a fight that will cost millions of dollars, divert potentially hundreds of organizers from other campaigns, and turn longtime labor movement allies into adversaries.