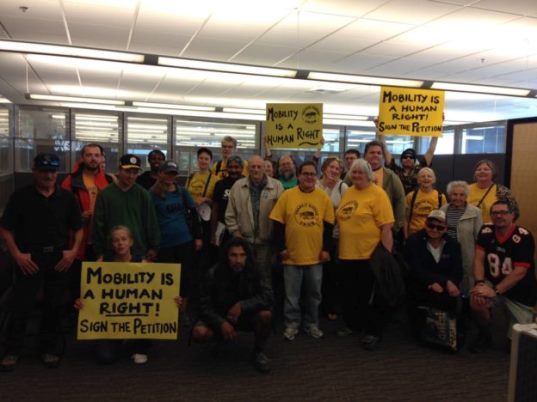 Transit is an incredibly affordable way to get around, but for people struggling to make ends meet, fares are still difficult to pay for.

If local governments decide to provide discounted or free fares to people in need, however, they need to budget for that expense. Otherwise they risk cuts to transit service — and harming the people who count on it — or providing temporary fare relief that won’t last very long.

Milwaukee’s underfunded transit agency is facing this very problem. Milwaukee County voted last year to make fares free for seniors and disabled people. But the county underestimated ridership and didn’t budget adequate funds, and now the discount fare program is running a $3.3 million deficit and in danger of elimination.

One city that’s building what looks to be a more sustainable model is Seattle. Katie Wilson at Seattle Transit Blog reports that King County officials are expanding the discount fare program to meet overwhelming demand:

Back in 1991, SHARE (Seattle Housing and Resource Effort) was spending most of their budget buying bus tickets so people could travel from their South Lake Union shelter to an overflow church on Capitol Hill. Nearly broke, they began meeting at the King County Administration Building before making the trek on foot. After weeks of this public demonstration of need the Metro Council relented: SHARE and other service providers could purchase tickets at a discount. The program has expanded steadily for twenty-five years, and last year 138 service providers distributed over 1.4 million tickets to homeless people, seniors, youth, students, veterans, refugees, and victims of domestic violence.

With housing costs and homelessness rising, the need for tickets has skyrocketed. The Transit Riders Union (TRU) learned from our members that tickets are a scarce resource; just procuring a few to get to appointments, meals, and shelter, let alone social activities, is time-consuming and stressful. Service providers confirmed this story. Queen Anne, West Seattle, and North Helplines can give people only a ticket or two per month. Often Compass Housing can’t get people to job and housing interviews. Casa Latina can help their day workers with transportation for only twenty days of each month. The King County Code caps the quantity of tickets available, and many organizations were not allocated nearly what they requested. For others, cost was prohibitive: providers pay 20% of face value, so the price per ticket doubled since 2008 due to fare increases.

The simple answer? Make more tickets available and cut the price. This summer TRU launched a campaign to do just that. We delivered hundreds of petitions and letters. Transit riders and service providers met with county officials and testified at public hearings.

This fall the King County Council and Executive responded. The council voted unanimously to raise the cap and then to halve the ticket price. Moreover, the Executive has promised to “direct Metro to engage other transit agencies, the state, other local jurisdictions, human services agencies and other potential partners in a discussion of transit’s role in contributing to the social safety net for the lowest income residents, and how to provide assistance while still being able to meet the growing demand for transit service throughout King County and the region.”