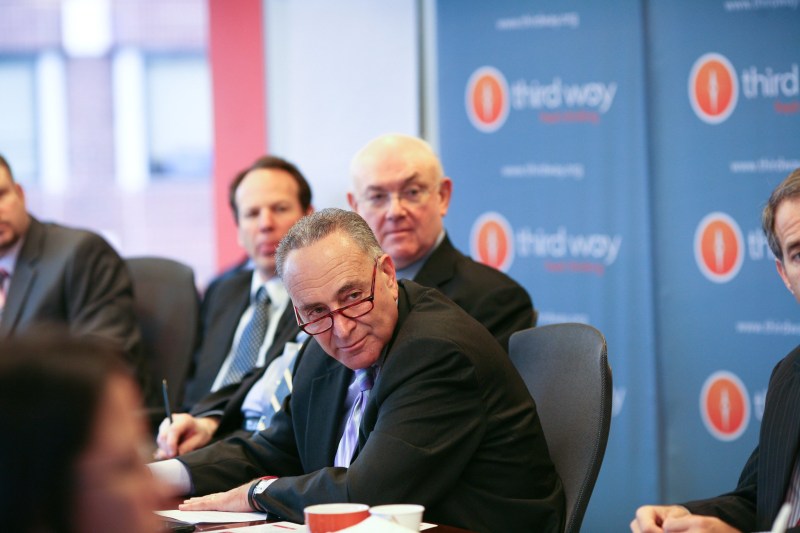 Senate Minority Leader Chuck Schumer’s revealed in the New York Times on Friday that he wants to get drivers to swap their gas-slurping vehicles for electric ones, but the plan is one of those classic cases of something that sounds better on paper than it would in practice.

The senior senator from New York envisions giving motorists a $3,000 voucher for an American-made electric or hydrogen fuel cell vehicle when they trade in their gas guzzling clunker. If every driver took advantage of the deal, there would be 63 million fewer internal-combustion engines on our roads by 2030, according to Schumer’s office. The $454-billion plan would also fund charging stations and invest billions in electric vehicle and battery manufacturing to better compete with China, which has seized half the world’s EV market.

But here are six reasons why Schumer’s op-ed is basically a half-trillion-dollar boondoggle that conscripts the country to a vehicle-dependent dystopia:

Congestion and sprawl will worsen

Any future that favors the supremacy of the automobile over other modes of transportation will keep the nation mired in its 20th-century problems of congestion and sprawl.

City and suburban leaders, aided by billions of dollars of highway and road funding from Congress, planned streets and zoned neighborhoods that catered to drivers first and foremost. That’s begun to change in some areas as Americans have been moving to walkable neighborhoods in cities and government officials embrace light rail, rapid bus lines, and transit-oriented development. But incentivizing electric vehicles and investing in charging infrastructure perpetuates city planning that encourages more driving and further sprawl.

And more cars on the road means traffic will get worse in downtown areas and commutes will get longer as people move further away. The best way to cut carbon emissions is to reduce traffic congestion and halt sprawl — and neither is solved with electric vehicles (except mass transit, that is).

Cars are deadly in all forms

Cars — whether powered by the movement of electrons or controlled explosions inside an engine block — are becoming safer for drivers while killing more pedestrians and cyclists in crashes in the deadliest year since 1990.

Last year, 36,560 people lost their lives in a motor vehicle crashes as pedestrian deaths rose 3.4 percent and bike fatalities jumped 6.3 percent from the previous year, according to federal records. Electric cars are no less of a menace on the roads, unless the cars are autonomous (and even then, who knows?). A motor vehicle can end a pedestrian’s life at speeds above 20 miles an hour and drivers can be distracted by their cell phones.

Drastically slowing speed limits and restricting where cars can drive are the only way to ensure that our streets remain safe for all road users.

Passenger vehicles contribute more than half of the transportation sector’s carbon emissions, which produce 29 percent of the nation’s greenhouse gases, according to the EPA.

Eliminating those tailpipe emissions would certainly help fight climate change, but electric cars aren’t carbon neutral just because there’s no exhaust. The U.S. generated 4.2 trillion kilowatt-hours of electricity last year — 63 percent of it by burning coal or natural gas, 19 percent of it from nuclear energy, and 17 percent from renewable energy sources. As a result, the power sector released 1.8 billion metric tons of carbon into the air, about a third of the country’s total emissions.

Electric vehicles are expected to rise in the U.S. from 2 million last year to 56 million per year by 2040, when they would comprise 57 percent of all car sales. Last year electric cars consumed 2.85 terrawatt hours in America, according to the Department of Energy. But demand for powering and charging these vehicles is expected to rise globally from 74 terawatt hours in 2019 to 2,333 terawatt hours by 2040, according to BloombergNEF. By then, EVs would comprise 11 percent of the country’s total electric consumption.

Manufacturing plants that make these vehicles and batteries requires the mining and smelting of rare earth materials including cobalt, lithium, and copper which expends an enormous amount of energy. Much of that production is done in China which still relies on fossil fuels to power its electric grid.

U.S. factories that make electric vehicles still have to rely on China for much of their raw materials, and Schumer is not requiring American factories to be carbon neutral.

Once the cars hit the road, particulates from rubber tires and brake pads can seep into our lakes, oceans, and waterways and pollute them.

Electric cars are still among the least efficient means of getting around a city, and the presence of these vehicles take up valuable street space that could be given back to the people who live there. Look at Barcelona’s superblocks which restricted cars from a nine-block cluster and vastly expanded the amount of space pedestrians and cyclists could move without inhibition. Or New York’s 14th Street Busway which banned cars and taxis allowing express buses to move through the corridor more quickly.

The streetscapes in both areas is quieter, more peaceful, and less stressful for everyone who passes through there because individual vehicles — electric and otherwise — aren’t zipping by.

One of the worst aspects of Schumer’s plan is that it only subsidizes those who already own vehicles while providing nothing to people who can’t afford one. And it could turn into an even larger burden on middle-class Americans who already own a car, but are struggling with other expenses and needed a risky auto loan to make it work.

“Millions of Americans are falling behind on their car loans, stuck in a transportation system that saddles them with the costs of car ownership just to participate in the economy,” TransitCenter spokesman Ben Fried told Streetsblog said. “It will be more of a curse than a blessing.”

The rise in car ownership and in taxi trips has significantly undercut transit use over the past decade. The long-term trend of reduction of transit passengers leads to shrinking revenues, worsening service, and higher fares for the rest of us.

“Any transportation emissions plan that doesn’t address America’s shortage of good transit is not a serious plan,” Fried said. “We also need to shift trips from driving to transit, biking, and walking. The more Americans live within walking distance of reliable, frequent transit service, the better our chances to avert climate catastrophe.”

Instead of promising to dole out subsidies for drivers and the automobile industry in 2021, Schumer should focus on funding transit which is under threat in the Senate right now. The Senate Transportation, Housing and Urban Development, and related agencies’ appropriations slashed funding for public transportation by $457 million in FY2019.