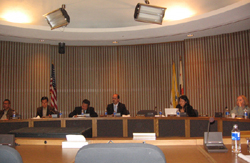 Students can no longer get physical education credit for service in JROTC – after a vote last night at the San Francisco School Board. More than 18 months after the Board voted to phase out the military program from public schools, and under duress of a lawsuit that cited a clear conflict in state law, the action upset cadets in the audience – but satisfied others who say it is long overdue. The Board had deadlocked 3-3 on this action at last week’s meeting, but with Commissioner Jane Kim back in town had the votes last night to get it through. But while progressives celebrated last night’s victory, pro-JROTC forces are gathering signatures for a November proposition – keeping this issue in the spotlight. For progressives to sustain this victory and keep their majority on the School Board, the District must make sure that alternatives to JROTC are available – or else suffer political consequences at the ballot box.

It’s easy to see why progressives have been impatient with the School District on this issue in the last two years. As an arm of the Pentagon, JROTC is clearly designed to recruit kids into the military. With the Iraq War in its sixth year, it’s disgraceful that San Francisco continues to tolerate such a program. The School Board voted in 2006 to oust JROTC – one week after Democrats took back Congress due to public demands to bring our troops home. Just like progressives are upset that Congress has not ended the War, activists are upset that the School Board has not ended JROTC in our public schools.

But it’s also easy to see why so many high school kids attended last night’s meeting to speak in favor of it. They didn’t join JROTC to enter the military – the program provides them with valuable leadership skills. It’s a clear symptom of the District’s lack of extra-curricular activities that so many students find JROTC attractive. As Peter Lauterborn wrote for Beyond Chron last year, “the way [JROTC] was cut from San Francisco schools was wrong. It is fundamentally wrong to cut an educational program without heed given to the students who demand it.” An alternative to fill in the void of cutting out this program is essential.

And that’s where program opponents – along with the School District’s bureaucracy – failed to follow through. A Task Force to find alternatives was doomed to fail, as then-Superintendent Gwen Chan (who disagreed with the Board’s mandate) stacked it with JROTC supporters. The Task Force meetings were not private, but they also were not publicly noticed. By December 2007, the School Board voted to extend JROTC for another year – after the Task Force said they “needed more time” to craft an alternative. As Marc Norton wrote in Beyond Chron, the Task Force’s request was as “phony as a three-dollar bill.”

Now it took the threat of a lawsuit for the School Board to take a major step that we hope will effectively phase out JROTC – as it voted to remove the option for students to have the program satisfy their P.E. credit. Recent state legislation requires all gym teachers to have proper teaching credentials, which JROTC instructors do not have. State Superintendent Jack O’Connell has expressed concern that JROTC does not satisfy the state requirement, because its course content is designed by the military. Public Advocates, a non-profit law firm, plans to sue the School District if they do not remove the P.E. credit for JROTC – a lawsuit that the School District would almost certainly lose.

But School Board member Jill Wynns objected to last night’s vote because the Board had voted on this Resolution on June 17th – only to get deadlocked on a 3-3 vote because Jane Kim was not present. Therefore, said Wynns, the motion failed and could not be re-opened without a 5-vote supermajority. But Todd Goluba, chief counsel for the School District, pointed out that “the rules are ambiguous” in revisiting the vote – and Commissioner Eric Mar pointed out that the intent behind School Board rules was “to promote vigorous debate.”

By a 4-1 vote (with two members absent), the Board voted to revisit the motion – and after public comment voted along the same lines to withdraw P.E. credit. Many students complained during public comments that this action was being taken during the summer while many of their classmates were out of town, but the threat of a lawsuit precluded the possibility of waiting until August. Board President Mark Sanchez further elaborated that the School District administration needed time over the summer to adjust to these changes – allowing for a smooth transition in the 2008-2009 school year.

As Sanchez explained later, JROTC will still be available in the next school year. But it will be an extra-curricular activity that students can take in addition to their P.E. credit. A new program – which is an amalgam of Ethnic Studies and Service Leadership – will be tried as a Pilot program in the fall, as a possible substitute to JROTC after the military program gets permanently removed in 2009. Progressives now have the burden to ensure this program’s success – and that it provides students with skills that they had sought for in JROTC. Not only is repealing JROTC the right thing to do for our kids – progressives need a replacement that will ensure their political survival in the following year.