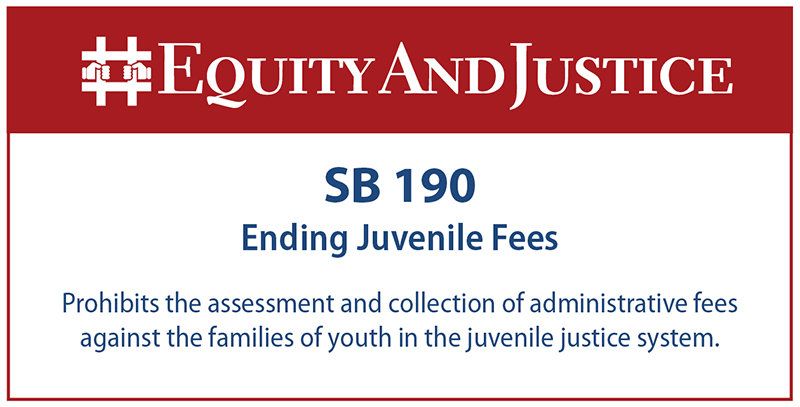 More specifically, SB 190 repeals county authority to charge administrative fees to parents and guardians for their children’s detention, legal representation, probation supervision, electronic monitoring, and drug testing in the juvenile system. At least 51 of California’s 58 counties currently charge one or more of these fees. The bill was co-authored by California Senators Holly Mitchell and Ricardo Lara and co-sponsored by a dozen community groups working to reduce the negative impact of juvenile system involvement.

According to Stephanie Campos-Bui, co-author of a University of California Berkeley study about the issue in California, “After years of researching this issue from every angle, we found that juvenile fees were a regressive tax on vulnerable families who can least afford to pay them. They’re often imposed unlawfully and they’re costly to counties and society. We applaud the Governor and the Legislature for taking this action to improve youth rehabilitation and enhance public safety.”

Laura John Ridolfi, Policy Director at the W. Haywood Burns Institute notes the racially discriminatory nature of juvenile fees: “Due to the significant racial and ethnic disparities that exist at each stage of the justice system, youth and families of color are saddled with the greatest burden of administrative fees. The passage of SB 190 is a victory for promoting equity in the administration of justice and reducing the negative impact justice system involvement has on youth of color in California.”

As Lewis Brown, Jr. of PolicyLink, which earlier this year released a brief about the debt trap of court-imposed fines and fees, notes: “Juvenile fees deepen financial insecurity in poor families of color, by draining the limited financial resources they have to spend on critical needs like housing and transportation. The passage of Senate Bill 190 represents an important first step toward eliminating these destabilizing and counterproductive fees across the country.”

California is the first state to eliminate all juvenile administrative fees, but advocacy organizations nationally are starting to address this important issue. Today, California stands as a national model and demonstrates a commitment to what works for justice-involved youth: supporting families and reducing barriers to success.

This piece first appeared in the CJCJ Blog