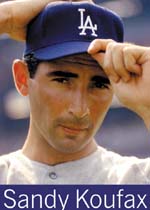 (Ed note: We thought it fitting to run this remembrance at the start of the Jewish High Holy Dates, which Koufax honored 43 years ago by skipping his scheduled start as the opening game pitcher in the World Series)

As the daughter of an immigrant worker, baseball was a very important part of my childhood. My step-dad’s baseball fanaticism provided us the privilege of seeing all the historic Koufax Drysdale no hitters. The Chavez Ravine games included, I believe, the September 9, 1965 perfect game. I remember being rounded up with my brothers into the station wagon with no time change out of our catholic school uniforms for a trip to Chavez Ravine. Chavez Ravine, the storied ballpark that displaced hundreds of Latino families when their homes were bulldozed in a back door deal between City officials and Baseball Ball Club owners. Going to the ballpark also meant being subjected to jeers by bystanders because my Step-dad would invariably refuse to stand up for the National Anthem and the Pledge of Allegiance. “It’s not my flag,” he told us about why we had to sit down when everyone was standing up. But that’s not the only reason we rarely attended games there. Another reason was that my Step-dad hated the Dodgers because they had no Latino players and why he loved the Giants.

The reason my Dad broke his LA Dodger Chavez Ravine ban was to take us to see Sandy Koufax.

My understanding of why has been revealed over time and was demonstrated by gas station baseball cup. Like a lot of immigrant workers, my Dad had two jobs. When he wasn’t working on a labor gang at the Southern Pacific Railroad, he worked part-time at the Union 76 gas station across from the LA Shrine auditorium. He brought home gas station promotional baseball cup giveaways with ball club player’s pictures on them. There were nine of us and we each had a player cup to drink from – Claude Osteen, Carl Yaztremski, Maury Wills, the Alou Brothers, Hank Aaron, Don, Sandy and others. We fielded the cups at our dinner table like on a baseball diamond.

Dad came home from work one day, washed the tar off his hands and before he sat down to eat he reached over and picked Sandy up from the dinner table and put him on the kitchen shelf above us. It didn’t make sense why Dad would bench Sandy like that. But that’s where Sandy sat for the rest of the summer, into the fall and beyond.

We only knew it was fall in LA because we were back at school and Dad took a few rare vacation days off to watch the World Series on the Zenith in the living room. We’d get home from school to find him on the couch with a beer, peanuts and the newspaper. Dad opened the Herald Examiner to show us a front-page picture of Sandy with his arm in a bucket of ice. Sandy’s arm was giving out.

In Marvin Miller’s book “A Whole Different Ball Game” about the organizing of the Baseball Leagues, Miller recounts the early days of the organizing of the Baseball Leagues when Sandy and Don lead one of the nascent leagues first job actions, The Hold Out. In 1965 Sandy was being paid $70,000 far less than the $130,000 being paid to Willie Mays in San Francisco. And Sandy and Don got tired of being pitted against each other in their bargaining with the owners, so they joined together to Hold Out until they got what they wanted. They eventually got a better deal and Miller credits this action as significant to the leagues organizing. He says.

“The Koufax Drysdale hold out during spring training had been an important rallying point for the players.”

Miller goes on to quote a player about how the baseball owners overplayed them and comments that had Sandy been able to play in an “era of five man rotations and relief specialists, its entirely possible he could have played more seasons.” And no doubt made more money as Miller also notes.

But the event that turned Sandy’s Union 76 baseball cup into a defacto shrine in our kitchen was the 1965 World Series, when Sandy decided not to play the first game of the series because it fell on Yom Kipper, the Jewish Day of Atonement.

By that time we lived in Boyle Heights a neighborhood that had once been a Jewish neighborhood and the main street now Avenida Cesar Chavez was then called Brooklyn Avenue. To borrow a phrase, as Catholic working class kids “we didn’t know from Yom Kipper” but we knew enough from my Dad’s deep respect for Sandy that it meant something for Sandy not to play on that day.

“This is a man of principle who suffers for his sport,” Dad said.

As we move into the fall, with the High Holidays approaching, forty three years after the 1965 world series and the recent news that Marvin Miller, a key baseball league organizer and player’s rep was once again turned down for admission to the baseball hall of fame, I reflect on what I learned from my Step-dad and his love for baseball. I have to say that my knowledge of the game is limited to that era, that narrow strip of time so I apologize to all the baseball fact fanatics for any errors.

But the lessons of courage and principle are true and have carried me a long way.