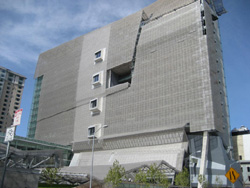 The idea of “green” buildings is a terrific marketing concept. In San Francisco, it has helped grease the political roadway for massive, view-blocking luxury condominiums, implying that building these structures is more environmentally sustaining than leaving land vacant. Few seem to care whether green buildings can be a nightmare for those having to work inside high-rise structures lacking heat or air conditioning. The new Thomas Mayne designed Federal Building at 7th and Mission Streets in San Francisco is a case in point. Lauded by the New York Times as a building that “may one day be remembered as the crowning achievement of the General Services Administration’s Design Excellence program,” what some believe is the greenest federal building in the nation’s history also likely has the worst work environment. While architectural describe the building’s “sense of airiness” as “magical,” employees view working in this heat and air-conditioning free building with the wavy concrete floors and ceilings as a nightmare.

Thomas Mayne’s new George H.W. Bush Federal Building now looms over midtown San Francisco. While people have sharply divergent reactions to its unique exterior design — I happen to like it — the verdict on the structure’s function as a office space for federal employees is nearly unanimous: it is a disaster.

Not that architectural critics care. Bedazzled by unusual design features and its focus on energy conservation, reviews of Mayne’s latest work seem to ignore whether it fulfills its functional role as a federal office building.

Based on what I have been told, it clearly does not.

The first fact about the building that may cause surprise is its lack of air conditioning or heat. According to Mayne, “a bike rack and air conditioning get you the same point. I’d much rather see BTU and CO2 requirements and let the professional community solve the problem.”

I apparently lack sufficient understanding of green technology, as it does not seem that a bike rack would “get you to the same point” in terms of keeping workers cool. In the real world on the 15th floor of the Federal Building, workers seek to relieve the heat by opening windows, which not only sends papers flying, but, depending on their proximity to the opening, makes creating a stable temperature for all workers near impossible.

When I spoke with a Labor Department worker at the building (who noted that she is encountering the type of bad work conditions that her agency is supposed to enforce against), she confirmed what might have been an urban legend: that some employees must use umbrellas to keep the sun out of their cubicles.

The lack of internal climate controls has left some workers too cold and others too hot. A happy medium has proved elusive. And while the managers’ offices do have heat and air conditioning — a two-tiered approach fitting in a building named for Bush — the “green” design apparently has messed with the effectiveness of these systems, leaving these top staff as physically uncomfortable as the line workers.

According to my source, architect Mayne has stated that federal office workers do not get enough exercise. To address this, he installed elevators in the building that only stop at every third floor. This requires employees to walk up or down one or two flights of metal stairs.

Persons with physical disabilities who cannot use stairs can use a separate elevator that stops at every floor. The foreseeable result is that employees seeking to avoid stairs use the disabled access elevator, leaving this car crammed with people and making the ride to the top extremely slow.

I am told that when the freight elevator is out of service, deliveries must use the disabled access elevator. It seems only a matter of time until a disabled worker sues the General Services Administration for providing inadequate disabled elevator access in the building.

Mayne’s desire to get workers walking may have impacted his decision to locate the employee cafeteria across the street from the building. Employees are not happy about having to leave the building just to get a sandwich, and were allegedly told that the building would include an on-site café.

But as is clear with every aspect of this testament to green buildings, this project was more a science experiment than a place designed to enhance worker productivity.

Green building advocates will no doubt argue that the Federal Building is a bad example, as it failed to secure LEED approval. According to its website, The Leadership in Energy and Environmental Design (LEED) Green Building Rating System™ encourages and accelerates global adoption of sustainable green building and development practices through the creation and implementation of universally understood and accepted tools and performance criteria.

Mayne noted that “I wasn’t arrogant, but I was confident — I just assumed we had the platinum rating. All of a sudden we went through LEED and it wasn’t working.”

But the project’s failure to satisfy LEED’s scoring system is not the problem. Rather, it is that the federal government spent millions over budget to create a building that does not provide a minimally satisfactory work environment.

And the project’s huge cost overruns and functional inadequacies have apparently been ignored solely due to excitement over its “Green” stature.