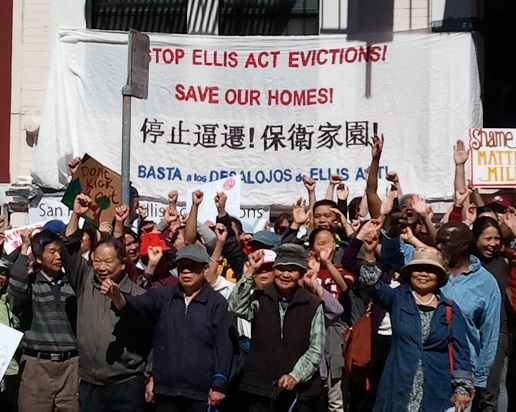 On March 27, two high profile San Francisco eviction cases abruptly ended: the landlord of Station 40 dropped efforts to evict tenants who had openly lived for years in commercial office space, and the owners of a Chinatown SRO said they would not pursue their ill-conceived efforts to displace tenants for hanging laundry in windows and for other alleged trivial lease violations.

Both evictions spawned major community opposition. And, more significantly, both brought criticism from all sectors of the San Francisco political establishment.

San Francisco has become strongly anti-displacement. With the city limited in its ability to combat spiraling vacant unit apartment rents and single family home and condo prices, there is now a political consensus that low-income, working and middle-class tenants must be allowed to stay in their homes.

Of course, the Board has no power to enact Ellis reform. When tenants pushed to reduce speculative evictions via Prop G on last November’s ballot, Christensen was a vocal opponent.

Mayor Lee got out in front of the anti-displacement mood. He publicly denounced the Ellis eviction of the Lee family in Chinatown in September 2013, which would be the first of many displacement efforts after a three year lull caused by the 2008 real estate crisis. The mayor followed this by intervening to stop the landlord’s original 2013 eviction efforts of tenants at 1049 Market Street.

Lee joined his public criticisms of evictions with huge increases in eviction defense funding. He then implemented a long needed strategy to have the Community Land Trust and other nonprofit groups purchase small buildings whose tenants are at risk of displacement.

Lee’s personal anger at these evictions impacts his real estate backers. It clearly was a factor in the prompt reversal of the eviction plans for the Chinatown SRO.

Here’s the problem. SRO’s are being sold for prices that require buyers to charge a lot more rent than current tenants are paying. For example, the owner of 2 Emery Lane paid $2.7 million for 32 residential SRO units plus commercial.  Do the math and you can see why a speculator would seek to displace all longterm tenants and bring rents to market.

But this transformation of Chinatown/North Beach SROs will not come about through the illegal eviction strategies used at 2 Emery Lane. That eviction never had a chance and similar efforts to find trivial lease violations to oust tenants will also fail.

Instead, law-abiding owners who have paid top dollar for properties will upgrade SROs to attract a younger working population that cannot get a studio in Chinatown/North Beach for under $2000. These tenants will be thrilled to find a home in the neighborhood for $1500-$1800—-even if it’s a 10 by 12 room without a private kitchen and usually without a private bath.

SROs on Broadway in the divide between Chinatown and North Beach are particularly ripe for such transformation. This stretch has a surprising number of underutilized SROs that have never been upgraded, which now makes them highly desired.

Unlike the Tenderloin, Sixth Street and the Mission, Chinatown/North Beach SROs have not been protected as low-income through the city’s Master Leasing program.  One reason is their smaller size, which often makes leasing financially infeasible. Another is a lack of interest by neighborhood owners in leasing their properties to nonprofit groups.

Expect concern over Chinatown’s future to be at the heart of the November supervisor’s race between Julie Christensen and Aaron Peskin. Peskin announces his candidacy this morning, and I’ll have an analysis of the race in the March 31 Beyond Chron.

Randy Shaw is Editor of Beyond Chron. His new book, The Tenderloin: Sex, Crime and Resistance in the Heart of San Francisco, will be available soon.