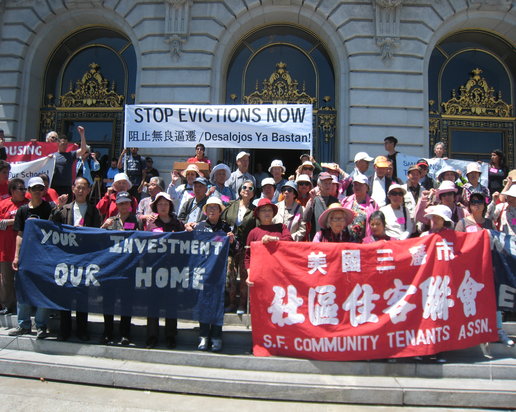 The objective was to put a lid on the unregulated, speculative construction boom that earned the city its most contentious distinction of being the country’s second most expensive place to live, just after New York City.

Housing activists say Prop K was a partial victory but more is needed.

That next step of “reining in record-high eviction rates” was announced at a July 27 city hall press conference attended by over 75 community, labor and political leaders.

“The data clearly shows that the evictions crisis and resulting loss of rental units” is a big blow to the city meeting its affordable housing goals, said Board of Supervisor Jane Kim.

Speaking on the steps of city hall, Kim announced her new pro-tenant “Eviction Protection Act/Just Cause 2.0” ordinance, a reference to the latest dot.com boom that set off soaring housing competition.

The ordinance idea came from the community and I am only too glad to “shepherd it through the legislative process,” Kim said.

We want this city to be diverse, to be a place where teachers, artists, students, retirees and other working families can live without fear of unfair evictions, Kim stated to applause, which  grew louder and more enthusiastic as she quickly added “and post office workers, too” in response to horn honking support from a passing postal truck.

Fear of eviction is shared by many in this city and not just by low-income residents.

Ken Tray, political director of UESF, the teachers union in San Francisco, told me “too many teachers face ‘eviction by harassment’. We get calls of desperation all the time.”

These numbers include hundreds of dubious evictions that skirt the edges of legality and cross the bounds of morality, a huge problem that activists say will only get worse.

The list is long. Several are cited on the SFADC Facebook page:“Soon after buying the building, the landlord was evicting 72-year old Sylvia Smith for having illegal subtenants in her three-bedroom Mission apartment.”

It turns out, the “illegal subtenants” were her two grandsons who moved in to help take care of their grandmother.

Cases like the elderly Smith have finally gotten the attention of local officials. In June, the city sued a landlord for bullying elderly and disabled tenants.

City Attorney Dennis Herrera’s complaint in San Francisco Superior Court alleged “a war of harassment, intimidation, and retaliation” against tenants in order to force them from their rent-controlled homes.

So, say housing activists emphatically, it is completely appropriate for tenant rights taking center stage to slow the displacement of working-class families from San Francisco.

For example, a city report shows 6,559 affordable housing units were added between 2004-2014. That actually is not bad.

But, during the same period, another 5,470 apartments were removed from rent-control “protected status” thru a variety of “no fault” evictions allowed by weak and nebulous state law. That actually is bad, very bad.

But even with all this community support for “Just Cause 2.0”, it will still be a big political challenge to win backing from the remaining seven city supervisors.

When I asked activists how they felt about the legislation they virtually all told me “it was the real deal.” The legislation “is exactly what we need,” leading Mission neighborhood community organizer Roberto Hernandez told me.

Community and labor organizer Conny Ford, vice president of the SF Labor Council, AFL-CIO, agreed and explained the legislation “helps to close some of the loopholes that greedy, unscrupulous landlords have used against tenants.”

For example, Ford told me, technical violations of a lease agreement will no longer be allowed as a pretext for evictions – such as painting a bedroom wall a different color than the original color, hanging laundry out of a window, or leaving a baby stroller in the hallway.

In other words, before there can be an eviction, there has to be substantial breech of the lease and a due process appeal system where tenants can make their case.

Thus, if the ordinance passed, landlords would no longer be able to impose arbitrary restrictions on adding roommates as in 72-year old Sylvia Smith’s case.

In addition, no rent increases would be allowed after “no fault” evictions, after change in terms of tenancy evictions or after a landlord’s decision to discontinue participation in government housing-assistance programs such as Section 8.

These are all extremely significant steps that would reduce a landlord’s unchecked impulse to evict by disallowing their much-anticipated reward of huge rent increases for the next tenants.

What is San Francisco Becoming?

The changes in San Francisco’s over the last five years have been remarkable and quite noticeable. Huge Star War’s tower construction cranes dot the landscape all across town. You can’t avoid them.

Tourists strain their necks looking up, way up, staring at their magnificence – fixed vertical masts rising 26 stories, topped by a rotating boom and equipped with a winch for hoisting and lowering loads.

Locals are less sympathetic. Streets are clogged. Traffic is congested. Rents are high.

These dramatic changes are unprecedented and, in many cases, unwelcome. And, it’s only going to get worse.

For example, with a population that has remained steady at around 775,000 for the last half century, planners now project a super-accelerated increase of 150,000 in fifteen years, a whopping 20 percent increase.

Situated on only 47 square miles, San Francisco is already the most densely populated city in the country after New York.

Wedged between the powerful, expansive Pacific Ocean and the serene, enclosed Bay waters, how many more residents can be squeezed into this beautiful city and, more to the point, who will they be?

* “This land is too valuable to permit poor people to park on it,” said Justin Herman in 1970, head of the city’s Redevelopment Agency, upon evicting Asian seniors from Manilatown. A major downtown plaza at the end of busy Market Street and across from the waterfront Ferry Building is misnamed for this elitist.

Carl Finamore is Machinist Lodge 1781 delegate to the San Francisco Labor Council. He was evicted ten years ago from the working-class Mission district after two visiting friends stayed a few days over the three-day lease limit of his studio apartment. He now resides in the Hunters Point neighborhood with the highest unemployment and poverty rate in the city. He can be reached at local1781@yahoo.com