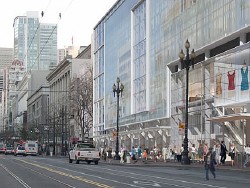 The San Francisco Planning Commission voted yesterday to approve historic Mid-Market Street’s most significant commercial project in at least 70 years. The 250,000 square foot retail project known as City Place at 935-965 Market Street will revitalize a long dormant stretch whose abandonment over the past decade has badly hurt the surrounding neighborhoods. CityPlace will attract people to Mid-Market, inspire positive new projects, and create 250 construction jobs and over 700 permanent jobs. It is a giant leap forward for what could prove the catalyst for the area’s revival, and for the long overdue improvement of nearby lower Turk Street.

The San Francisco Planning Commission has now approved two critical projects necessary for reviving Mid-Market Street: the new Trinity Plaza at 8th and Market, and now CityPlace between 5th and 6th Streets. These two projects will be the economic engines for future improvements in the two blocks in-between.

This victory did not come easily. As I recently wrote, CityPlace hoped to be under construction by the fall of 2009, and is now over a year behind schedule. It would have been so easy and understandable for developer David Rhoades and his partners to simply take their plans elsewhere, but they persisted and finally have a project to build.

Like Trinity Plaza, CityPlace had overwhelming public support – but unlike its Market Street companion (whose first tower is already occupied), it got bogged down in a battle over parking. Those critical of building new parking anywhere and for any reason opposed the developer’s view that a retail project is not economically feasible or can even be financed absent customer parking.

An accommodation was reached, with the parking reduced from 201 to 167 spots. There will be fifty bicycle spaces, and several for City Car Share.

There was little opposition to the project at yesterday’s hearing, and broad and overwhelming support. Rhoades and his team are finally able to secure tenants for the spaces, a critical step delayed until final project approval.

CityPlace, like the new Trinity Plaza, further demonstrates that Mid-Market’s revival requires major new investment by area property owners. Public entities own no buildable lots in Mid-Market – and only control UN Plaza, which has not helped the area’s tattered image.

With the Grant Building at 7th and Market undertaking a $15 million renovation, there are now three major projects slated for the south side of Mid-Market. Rhoades’ Urban Reality group owns a number of properties on the north side of Market across from CityPlace, and is already turning its attention to that area.

This portion of Mid-Market is particularly important because its vacant backside has left a row of empty storefronts along the first block of lower Turk Street in the Uptown Tenderloin Historic District. A new project would improve both areas, and given Urban Reality’s ownership of CityPlace, it has great incentive to improve the adjacent blocks.

Deciding what project to develop at that location will not be easy. The need for more retail in Mid-Market after CityPlace is unclear, and housing developers ignored Mid-Market even when sites in the city were scarce during the boom years.

But we’ll hold off questions about other sites for another day. It’s a time to celebrate CityPlace’s approval, and Mid-Market’s continuing to move in a positive direction.