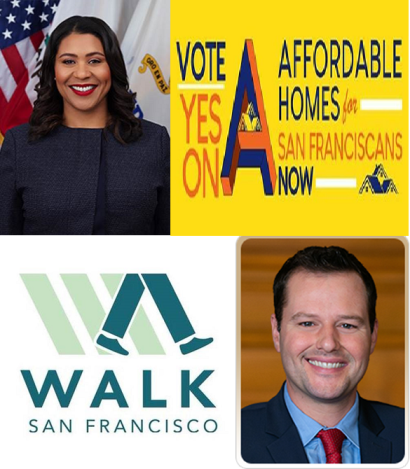 Local politics took a backseat in 2019, particularly after impeachment hearings began. But San Francisco still had an eventful year. Here’s my analysis of the year’s big urbanist breakthrough, and the performances by Mayor Breed and the Board of Supervisors.

2019 was the year San Francisco finally got serious about protected bike lanes, pedestrian safety, and eliminating cars on Market Street. This was a huge urbanist breakthrough.

Adding to this progress was Mayor Breed’s selection of Jeffrey Tumlin to head SFMTA. Tumlin could turn out to be Mayor Breed’s best and most important appointment ever.  He is exactly what San Francisco needs but has forever lacked: a transit agency leader who is an urbanist visionary. Tumlin sends the message that SFMTA is headed by someone who recognizes that city policies cannot and should not revolve around what is best for cars.

Getting cars off of Market Street in 2019 also sent this message.

In January 2014, former Supervisor David Chiu introduced a measure to restrict private cars in Mid-Market. It was not until June 2015 that SFMTA agreed to a temporary car ban on Market from 3rd-8th Streets. As I discussed in “SFMTA Backs Safer Mid-Market,” June 17, 2015, the Better Markets Street implementation plan was supposed to begin in 2013!

The delays occurred despite a Board of Supervisors filled with strong bike advocates like Chiu, Scott Wiener and Jane Kim. But in arguably his biggest misstep as mayor, Ed Lee allowed city bureaucracies to delay removing cars; it is a stance Mayor Breed rejected.

These activists and the strong leadership of newly elected D6 Supervisor Matt Haney also brought a big expansion of protected bike lanes. Sadly, it took the killing of SOMA bicyclist Tess Rothstein last March to finally shift city action into high gear. Her killing by a truck on a part of Howard Street a block from a protected lane exposed the fatal consequences of the city’s inconsistent bike lane system.

In response to anger over Rothstein’s death Haney absolutely demanded action and would not be deterred. As with removing cars on Market, Mayor Breed agreed to the community and supervisor’s demands.

Let’s be clear: San Francisco has not become Amsterdam or Copenhagen. The city has a long, long way to go to be considered bike and pedestrian friendly.

But 2019 was a huge step forward. And Tumlin ensures the city has the right leadership in place to keep moving in the right direction.

Mayor Breed faced strong resistance from the Board of Supervisors from the start of 2019. Yet the policies that emerged from her response to this resistance ultimately contributed to the mayor implementing the nation’s most progressive urban agenda.

Supervisor opposition was understandable; a Board majority removed her from her position as Acting Mayor in 2018 and did not support her in the June 2018 election. Mayor Breed did not have a close relationship with her former Board colleagues which contributed to sometimes frosty Board-mayor relations.

The Board majority opposed the mayor’s plan to prioritize distribution of ERAF funds for homelessness (excess state funds issued to counties) and to end discretionary review for nonprofit affordable and educator housing. It opposed her mental health strategy, though after a bitter fight a compromise was reached by year’s end. The Board also clashed with the mayor over raising office development linkage fees; Matt Haney’s legislation passed 11-0 but the Mayor did not sign it. The Mayor and Board did come together for the $600 million affordable housing bond, and it won voter approval.

Mayor Breed is a very personally popular mayor. Despite the city’s problems she won a sweeping 70.3% re-election. People who downplay this by saying she “didn’t beat anybody” ignore that none of the “anybody’s” thought they could win.

Once it became clear she would face no major opponent, the media and public seemed less critical of the mayor. My sense is that both felt she deserved a fresh new four year term before they began the standard criticism; public anger over homelessness, problem street behavior and other city problems has already returned to normal.

Overall, Breed had a banner 2019. I described her in April as America’s housing mayor and she continued to build on that record. But I see warning signs ahead.

After she won re-election Breed did not announce a series of goals for her next term or even for 2020. Her team may have felt this could wait until 2020, but getting out ahead of the Board was important as she faces a group of supervisors even less interested in working with her than the last.

Unless Breed offers an ambitious agenda and rallies to get the public behind it, she risks spending 2020 responding to legislation proposed by supervisors. It’s never good for a mayor or any politician to be on the defensive.

I’ll address this further in my January 2020 preview story.

At the micro level, the Board had a very productive year. It passed a lot of legislation, promoted ballot measures, and held a lot of hearings.

But I can’t get beyond the macro, big picture level: the SF Board of Supervisors continues to deny that housing policy is climate policy. I write about thiis shortcoming in Generation Priced Out: Who Gets to Live in the New Urban America and it continued this year.

The Board took no action in 2019 to address its acute housing shortage. A shortage that forces a rising number of workers to drive from Sacramento or Vallejo to get to their San Francisco jobs. Supervisors Mar and Fewer are big backers of unions on labor specific issues but both oppose new housing for union workers in their Westside districts. Mar says we have enough market rate housing; yet he does not explain where union workers, who earn too much to qualify for subsidized housing, are supposed to live in the city without allowing new multi-unit buildings—-where units would rent or sell for a lot less than existing homes— on the Westside.

In electing Mayor Breed, Assemblymembers Chiu and Ting and State Senator Wiener, the city’s electorate showed support for politicians who support building both unsubidized and affordable housing. But at the district supervisors level, as I highlight in Generation Priced Out, anti-apartment homeowners call the shots.

This became crystal clear when not a single “progressive” supervisor backed Mayor Breed’s attempt to pass a charter amendment ending frivolous discretionary review appeals for affordable and educator housing; the supervisors decided that allowing homeowners to raise the cost and delay affordable projects was a higher priority. The supervisors also unanimously  rejected a 63 unit, 25% affordable  SOMA project (approved by the Park and Rec and Planning Commissions) because on some days it would create late afternoon shade on a nearby park. Many see access to shade as a positive in cities, and the Board showed how little it values infill housing by killing the project.

District 6 Supervisor Matt Haney is my choice for Supervisor of the Year. Not because I always agree with him—I often do not—-but because he was constantly holding rallies, media events, promoting issues on social media and introducing and announcing legislation. Haney likely got more media coverage about poop on D6 sidewalks than any other supervisor got for all their issues combined.

D6 supervisors always get extra media attention. In Jane Kim’s day it was primarily because the area had the most new housing and office developments. Today, the city’s  turning the Tenderloin and Sixth Street into containment zones for drug users, the unhoused and those with acute mental health problems converts D6  issues into those of citywide and even national concern.

Haney has risen to the challenge. In some cases, as with pedestrian safety and the 24-hour toilets, he achieved a solid city response. Haney, Supervisor Ronen, and Mayor Breed also worked out a new $100 million investment in mental health services. Haney has not gotten the Tenderloin its fair share of police officers but he has tried.

Haney sometimes oversells his legislation. He wrote about his “Universal Eviction Protection” legislation,  “No longer will the year your building was built determine if you are protected from arbitrary eviction or eligible for relocation benefits.”

That is completely misleading. The year your building was built makes a huge difference. Here are the facts:

David Chiu’s AB1482 brought just cause eviction protections and annual rent caps to pre-2004 buildings across California. Haney’s measure extended just cause to post-2004 buildings but these tenants have no protections against rent hikes. None at all. A landlord can freely raise their rent far more than they can pay, and they face a choice of a nonpayment of rent eviction going on their record or moving. They will not get relocation expenses.

In other words, the value of their “just cause” protections is largely illusory. Arbitrary evictions via rent hikes are as possible under Haney’s law as before.

Bottom line: tenants in pre-1979 buildings in San Francisco have the full protections of the city’s Rent Ordinance. Tenants in buildings constructed from 1979-2003 have the protections of AB 1482, whose annual allowable rent hikes will typically be three to four times higher than the rent law limit. Tenants in post 2003 buildings—the “market rate housing” that Haney’s political allies use exclusionary zoning to stop from being built in most of the city —these tenants have no protection against excessive rent hikes.

So true eviction protections in San Francisco are not universal. It makes a huge difference when your building was constructed.

Haney also overstated the timing, money and units created by  increasing the office linkage fee. But he was the one who moved to increase a fee that everyone agreed was too low. It was another example of Haney seizing the initiative on a long overdue issue.

Overall, Haney is working hard in multiple areas to make San Francisco a better city. Other supervisors also had good years but none shaped the public debate as much as Haney.

Dean Preston joins the Board today. I think he will bring Haney-type energy to get things done. Preston has indicated he will make opening a Navigation Center in D5 a top priority. That’s great for the city but could quickly put him on the outs with colleagues who have thus far been able to talk about opening homeless services in their districts but have avoided actually doing so.

I’ll offer a preview of the Board’s likely 2020 program in my January 6 story.