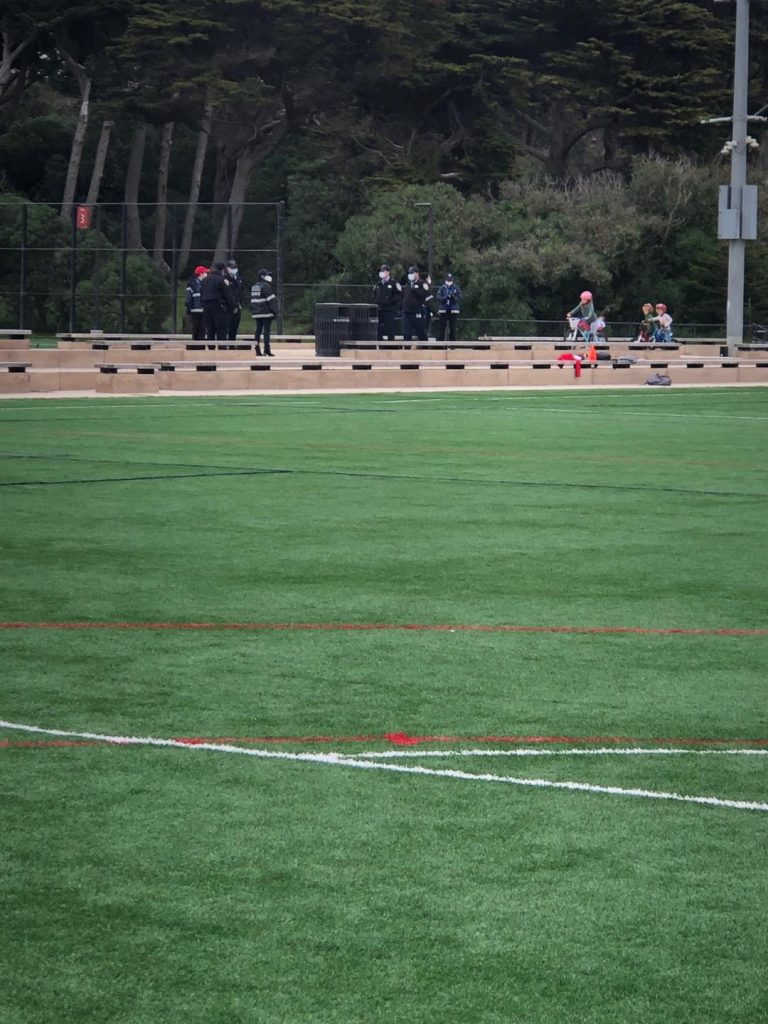 “We are no longer trying to break up encampments, whether it’s one tent or 15 tents,” Jeff Kositsky, manager of the city’s Healthy Streets Operation Center, NY Times, April 10, 2020.

San Francisco has responded to claims that over 300 tents on Tenderloin sidewalks endangers the community by insisting the unhoused are free to pitch tents in all neighborhoods. According to Jeff Kositsky, the unhoused can camp on sidewalks from Pacific Heights to the Marina, and Noe Valley to Nob Hill.

I’m sure the unhoused were glad to hear Kositsky’s words. But few are likely to believe that the “right to camp” has become San Francisco policy. One doubts whether Mayor Breed even approved of this alleged new stance. Or if any member of the Board of Supervisors will start encouraging camping throughout their district.

Supporting evidence for the alleged new “right to camp” policy  is noticeably absent. This weekend saw over 300 tents blocking Tenderloin sidewalks; meanwhile, I heard no reports of camping in the city’s upscale neighborhoods.

Yesterday morning we checked the Richmond, Golden Gate Park, Ocean Beach and the Sunset. We saw no tents. I saw photos of 24th Street in Noe Valley taken Sunday: again, no tents.

San Franciscans are not a gullible people. They know that the unhoused are not jammed together in the crowded and unsafe sidewalks of the Tenderloin because that is where they prefer to live. They also know that the police will continuing clearing tents from blocking sidewalks in upscale neighborhoods while ignoring this in the Tenderloin.

I learned a key lesson about the Tenderloin nearly forty years ago from Leroy Looper, my longtime mentor and close friend. Looper sold drugs on the sidewalks of Harlem before turning his life around; he had street wisdom that is not taught in school.

I told Looper that the police said that they lacked the legal ability to stop potential drug dealers from congregating on Eddy Street near the Cadillac. He laughed. He said “if we pack those dealers in a van and unload them on Union Street, and have them start hanging out there, how long do you think they would last? Five minutes? Ten? The police won’t be telling those Union Street merchants that they are powerless to stop people from hanging out on corners.”

5-10 minutes is also about as long as a tent would last on Union Street, notwithstanding Kositisky’s stated “policy.” And those tent dwellers would be warned not to return.

I’ve considered implementing Looper’s idea. Ask a group of tenants to pitch tents on Union Street and see how long they last. But it’s really not necessary. San Franciscans know that the city applies one set of rules for upscale neighborhoods and another for the Tenderloin.

City Hall needs to stop denying the truth of its double standard.

San Francisco is turning the Tenderloin into a ghetto, a containment zone for activities barred elsewhere. City officials know that the Tenderloin has over 300 nightly tents because that’s where the unhoused are allowed to be, not where they prefer to camp.

Kositsky has made vague claims for the past two weeks about opening supervised tent encampments. That’s a low-cost strategy that could immediately reduce sidewalk clogging in the Tenderloin. But no action has been taken. Kositsky knows that it’s always best to say you are considering something rather than just saying no; it buys time and allows the media to claim that the city is moving toward a solution.

We think of San Francisco as a progressive city. One that gave America a powerful LGBTQ movement, Reverend Cecil Williams, City Lights Bookstore, the Grateful Dead and the Summer of Love. We don’t think of “progressive” San Francisco as a place that blatantly denies equal protection of the laws to low-income communities of color. But that is exactly what has been happening in the Tenderloin.

And this was happening before the pandemic. I described this in my SF Chronicle op-ed from February 23.

The coronavirus brought into sharp relief just how far the city is willing to go to deny equal protection of its laws to the Tenderloin; as far as endangering the lives of its residents. The city’s double standard on enforcing social distancing—-highlighted by the empty sidewalks throughout the city while Tenderloin sidewalks are often completely blocked— has exposes San Francisco’s race and class based discrimination for all to see.

We don’t know if there has been an outbreak of the virus in the Tenderloin because very few in the neighborhood are tested. Even if they were,  results are not disclosed by neighborhood. But the city can’t go around saying how important social distancing is to “flatten the curve” and not recognize that the lack of such distancing in the Tenderloin will have perilous consequences.

I told KPIX reporter Wilson Walker over the weekend (a four-minute must see story) that San Francisco could open sidewalks in the Tenderloin at minimal cost and virtually overnight.

What is City Hall waiting for?