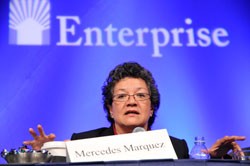 You won’t hear about this on Countdown or the Rachel Maddow show, nor likely in the progressive blogosphere, but the Obama Administration is quietly creating an affordable housing “Dream Team” over at the long beleaguered HUD. The process began with the selection of Shaun Donovan as HUD Secretary, continued with the appointment of the Bridge Housing’s Carol Galante as Deputy Assistant Secretary for Multifamily Housing Programs, and late last week the White House announced it would bring in one of the nation’s most savvy and effective housing advocates when it nominated Los Angeles Housing Czar and native San Franciscan Mercedes Márquez for HUD Assistant Secretary of Community Planning and Development.

Mercedes Marquez is Los Angeles’ most powerful housing official. Her responsibilities exceed those of any single person in San Francisco – as she administers code enforcement, the Rent Board, and affordable housing development.

With the backing of Los Angeles Mayor Antonio Villaraigosa, Marquez has transformed the city’s housing division. She led the effort to win City Council passage of a strong residential hotel anti-conversion ordinance, and has exhibited the political skills that will be greatly needed in her new position.

Marquez has San Francisco roots, and her brother Richard is a longtime activist in the city. Her appointment adds to the roster of top HUD officials with direct and personal experience with the Bay Area’s affordable housing crisis.

Márquez became General Manager of the City of Los Angeles Housing Department (LAHD) in January 2004. She had previously served in the Clinton administration as the Senior Counsel to the Secretary and Deputy General Counsel for Civil Rights and Fair Housing for HUD. In this capacity she advised former Secretary Andrew Cuomo (the best HUD Secretary to date) on civil rights policy including fair lending and fair housing enforcement, and led investigations and negotiations of housing discrimination cases resulting in landmark settlements.

From 1992 to 1997, Márquez was a partner at Litt & Márquez, where she specialized in complex public interest litigation including slumlord, fair housing, public housing, sexual harassment, employment discrimination, and constitutional issues cases.

We look forward to Marquez’s first visit to the Bay Area in her new position.