San Francisco Jewish Film Festival – “Invisible,” “Kaddish for a Friend,” “Ameer Got His Gun,” “The Flat” 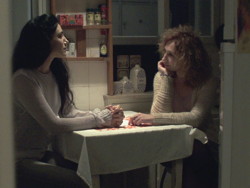 Buoyed by stunning performances from leads Evgenia Dodina and Ronit Elkabetz, Michal Aviad’s disturbing “Invisible” proves itself one of San Francisco Jewish Film Festival 2012’s must-see dramas. Aviad, a San Francisco State University alumnus, bases her film on a real-life crime spree. While covering a clash between Palestinian olive farmers and an IDF detachment, TV documentarian Nira (Dodina) recognizes leftist activist Lily (Elkabetz). Back in the 1970s, both women were among the victims identifying The Polite Rapist from a police lineup. The present day encounter leads Nira and Lily to confront the long term legacy of the serial rapist’s traumatic crimes.

The title “Invisible” principally refers to the signs of rape on a woman. Despite the façades of fulfilling lives as filmmaker and leftist activist, both of the lead characters bear unacknowledged sorrows from the crime. Nira unconsciously feels guilty for sparking her father’s fatal heart attack. Lily and her writer husband Annon remain emotionally distant from each other. Neither woman has been able to bear a man’s intimate touch.

Yet the titular adjective also references attitudes towards rape encouraged by Jewish society’s sexism. From police attitudes which regarded a woman walking alone as a nymphomaniac seeking rape to newspaper articles focusing on the rape victims’ attractiveness, Lily’s silence about her rape becomes both understandable and tragic. Yet that silence undermines her relationship with daughter Dana.

“Invisible” builds to a quietly angry yet powerful conclusion that rebukes those people journalist Laurie Penny describes as believing women who suffer rape are personally enriched.

Leo Khasin’s “Kaddish For A Friend” is fortunately not a Hollywood production which drowns viewers in a San Francisco Bay’s worth of syrupy sentiment. This German film’s life lesson about solving Israeli-Arab friction is merely “Gee, the other guy’s a nice person when I get to know him.”

Arab teenager Ali Messalem and his refugee family move into the apartment downstairs from elderly Jew Alexander Sakozy. After Ali helps perpetrate a hate crime against Alexander, the future of both the Messalem and Sakozy homes is endangered. The teen’s forced labor with the World War II veteran eventually helps him recognize who his real friends are.

Khasin’s film becomes dismissible early thanks to a slow set-up and a metaphorical problem having the subtlety of a mile-long meteor’s splashdown. What makes the film watchable is the rocky evolution of Ali and Alexander’s relationship from initial hostility to eventual friendship.

Imposing all the emotional evolution on Ali’s side proves just as bad as making the film’s other Arab males be reflexive anti-Semites or sexist thugs. The film never has Sakozy’s friends seriously reconsider their supposedly parallel belief that Arabs are inherent terrorists. “Kaddish for a Friend” feels as frustrating as mutual intransigence in Israel-Palestine talks.

Ameer looks forward to his continuing a family tradition of military service with his upcoming army induction. But because the young man is an Arab Israeli joining the Israeli Defense Forces, different social consequences apply. The Israeli government generally considers Arab Israelis to be security risks. Ameer’s fellow villagers consider him a traitor who will shoot fellow Arabs. As the new soldier goes from enlistment to deployment, could he become a role model for Arab-Israeli peace?

Levari doesn’t judge the wisdom of Ameer’s act. Instead, her film’s intimate footage movingly captures in personal terms major political attitudes. Ameer’s father sees his son’s military service as both a rite of passage and a concrete statement that his son is an Israeli citizen. Fellow villagers’ disgust with Ameer’s impending military service gets expressed via a boycott of the Abu-Ria sendoff party for their son.

Ameer’s belief in the reconciliatory effects of his military service suffers other psychological knocks. Flickers of doubt appear in Ameer’s eyes as he reads YouTube comments supporting humiliating and/or killing Arabs. An uncle who regrets his IDF service and sister Ameera’s own critical remarks also challenge Ameer’s enthusiasm.

Those same doubts don’t prevent Ameer from socializing with his fellow IDF recruits or doing his job as a member of the Border Police. Yet Levari leaves ambiguous whether fellow IDF soldiers’ recognition of Ameer demonstrates acceptance or wariness.

One ends this powerful film hoping this idealistic young man has not been blinded by self-delusion.

The proverbial closet skeletons discovered in Arnon Goldfinger’s mundanely titled must-see documentary “The Flat” turn out to be the sort which strangles people with blood-speckled finger bones.

The Goldfinger clan discover among their deceased grandmother’s effects a preserved issue of the rabidly pro-Nazi newspaper “Der Angriff.” Even more shocking is learning the grandparents maintained a friendship with Nazi official Leopold von Mildenstein and his wife both before and after World War II. The filmmaker’s investigation of the history of this friendship leads to his encounters with painful cases of Holocaust denial.

Goldfinger’s circuitous portrayal of the film’s central search magnifies its emotional impact. While it’s amusing seeing grandmother Tuchler’s Imelda Marcos-like glove collection, the filmmaker’s slow realization that he knows very little about his grandparents’ lives leads him to travel between Germany and Israel to find answers. Shots of his piercing eyes confronting almost unconscious walls of silence feel like attempts to destroy those barriers of denial.

The filmmaker realizes that the deaths of the parties to this controversial friendship will leave certain important questions unanswered. Yet leaving the audience to ultimately supply their own answers will fruitfully spark discussions about the nature of acceptance of evil.