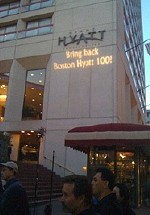 Supporters of Boston housekeepers fired by the Hyatt Corporation held a candlelight vigil at San Francisco’s Grand Hyatt Hotel on November 19 as part of a series of national actions calling attention to the issue. While Hyatt staff appeared perturbed that Unite Here Local 2 was shining a light on the Hotel itself to broadcast its message criticizing the Hotel’s actions, they were unable to prevent the clever tactic.