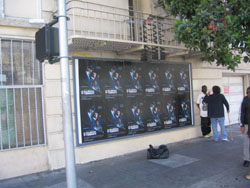 This photo was taken yesterday at the corner of Turk and Hyde. It’s the same billboard space that we featured one month ago and in February, when we complained about the City’s lackluster enforcement of Proposition G. These billboards are illegal, after San Francisco voters passed a ban on new outdoor advertising in March 2002. But despite a complaint filed with the Planning Department, they’re still there. Meanwhile, Sao Paolo, Brazil – the fourth largest city in the world – has passed a far more radical billboard ban, and the city has already collected $8 million in fines. Seventy percent of Sao Paolo residents support the ban, and the city’s conservative, pro-business mayor has championed the legislation.

San Francisco’s law is pretty simple – no new billboards can be placed on the exterior of private buildings. Seattle has a similar ban, as do Palo Alto, Houston, Dallas and 114 cities in Texas. While cities could mandate the removal of existing billboards, the U.S. Constitution requires that the billboard company be fully compensated – so most have opted to simply ban new billboards.

Sao Paolo’s law is more substantive. Not only does it ban the installation of new billboards, but all billboards as well. “The Clean City Law came from a necessity to combat pollution,” said Sao Paolo Mayor Gilberto Kassab, “pollution of water, sound, air, and the visual. We decided that we should start combating pollution with the most conspicuous sector – visual pollution.”

What’s amazing is that Gilberto Kassab belongs to the conservative political party in Brazil, with deep ties to the City’s business community. Sao Paolo is a city of 12 million people, and is known as Brazil’s slick commercial capital. But with 15,000 billboards removed – and nearly $8 million in fines collected – residents understand that the new law makes a cleaner, more beautiful city.

“Sao Paulo’s a very vertical city,” said Vinicius Galvao, a reporter with Folha de Sao Paulo, Brazil’s largest newspaper, in an interview on NPR. “That makes it very frenetic. You couldn’t even realize the architecture of the old buildings, because they were just covered with billboards and logos and propaganda. And there was no criteria.”

“Now it’s amazing,” he said. “They uncovered a lot of problems the city had that we never realized. For example, there are some favelas, which are the shantytowns. I wrote a big story in my newspaper today that in a lot of parts of the city we never realized there was a big shantytown. People were shocked because they never saw that before, just because there were a lot of billboards covering the area.”

Even the Brazilian advertising companies that used to make billboards have reluctantly come around with the new law. “I have to agree – on the other side – with the Mayor,” said Roni Ghotillf, C.E.O. of Fox Communicacao. “We’re looking for alternatives. We may run ads or billboards in the subway, taxicabs or even inside large department stores.”

Multinational corporations, on the other hand, didn’t take it so well. Clear Channel Outdoor, the notorious American company, purchased a large share of Sao Paolo’s billboard market a few years ago. Weeks before the ban took effect, they launched a counter-campaign, with slogans such as: “Outdoor media is culture.”

But Sao Paolo residents were not impressed with Clear Channel’s attempt to manipulate them. Surveys show that over 70% approve of the new City ordinance.

Back in San Francisco, where Clear Channel has deep ties with certain politicians, the Planning Department still hasn’t found an effective way to enforce a simple law. The new illegal billboards seem to be sprouting everywhere, and are even becoming their own institution.

Now the billboards at Turk and Hyde even have a small notice next to them that says, “WIN THESE POSTERS AND OTHER PRIZES – DETAILS INSIDE.” I went to the liquor store next door, and the clerk told me that they’re raffling off the posters on a regular basis.

And our law’s been on the books for five years?