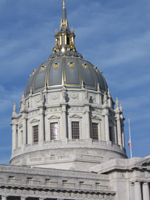 As San Francisco struggles to close an over $300 million budget deficit, nonprofit employees performing vital city services are being asked to bear the brunt of this fiscal crisis. Some nonprofit employees face layoffs due to program cuts, and the mayor’s proposed budget includes no raises at all for nonprofit workers. This wage freeze comes as gas prices and rents continue to rise, and as it is harder than ever to live in San Francisco on a nonprofit salary. If all who performed services for the city were treated equally, this wage freeze could be justified. But that’s not the case. Some city workers—police, fire and nurses—will receive raises this year of over 6% despite the deficit, as part of a deal approved by the Mayor and Board of Supervisors in 2007. And while nobody can criticize these workers for getting the most money they can, and we can talk about laying off city managers and extracting more money from downtown corporations, the bottom line is that San Francisco’s elected officials continue to increase the salary gap between nonprofits and other workers. And they are willing to accept an underpaid nonprofit sector even if this means lower quality services for the city’s most vulnerable.

While San Francisco activists focus on fighting cuts to human services programs, the city’s proposed 2008-09 budget includes other troubling news. The city’s nonprofit sector is slated to receive a 0% budget increase, which means that thousands of nonprofit workers, many of whom run the city’s highly touted health and homeless programs, will see no wage increases during these tough economic times.

San Francisco has long had a two-tiered workforce, whereby city employees get higher salaries and greater benefits than those working for nonprofits under city contracts. Nonprofits came to dominate the city’s homeless and AIDS programs in the 1980’s because they were deemed more effective and culturally sensitive, though their cheaper price was no small factor.

Despite San Francisco nonprofits providing tens of millions of dollars in city services each year, the perception persists that people “choose” to accept less wages and benefits by working in the nonprofit sector. Ongoing public ignorance about nonprofits recently became clear when the San Francisco Examiner and Chronicle ran stories about compensation levels for nonprofit top executives; some readers were incredulous that a nonprofit head should ever get a six-figure salary, regardless of the organization’s size or annual budget.

But many city officials realize that running quality programs requires quality staff, and that such personnel cannot be attracted or retained if nonprofit salaries are far below comparable jobs in the public or for-profit sector. In fact, in 2007 the Mayor’s budget included a 3.4% increase for nonprofits, an allocation that led many to believe that our elected officials finally understood the value of nonprofit workers.
(To be clear, politicians have long extolled the services performed by nonprofits. Former California Governor Jerry Brown once argued that teachers did not need big raises because they got paid in “psychic dollars.” But like female secretaries’ demanding “raises not roses,” nonprofit workers cannot use public praise to pay the bills.)

The proposed nonprofit wage freeze shows that last year’s progress was only temporary. And that elected officials either do not care about the widening gap between nonprofit and other city workers, or do not feel that bridging this chasm is a priority.

As noted above, I do not blame the police, fire and nurses unions for getting a great multi-year deal for their workers last year. And much as it is fashionable to accuse Mayor Newsom of making a sweetheart election-year deal, the Mayor had no prominent re-election opponent and the Board of Supervisors approved the wage hikes with little debate.

The underlying problem is structural. City workers reach multi-year deals that reward them during good times and give them bargaining leverage during down years. This means that no matter how large the deficit, the city is obligated to pay agreed upon salary hikes, even if it means massive layoffs.

In contrast, most nonprofits renew contracts with the city annually. Even if the nonprofit contract is multi-year, the city is free to change the economic terms annually, or even during a contract year.

This is true even when the nonprofit includes unionized workers. So nonprofits can do well in good times, but become the city’s first target for cuts when money is tight.

Progressive San Francisco, where politicians denounce Republican tax breaks for the rich and decry widening economic inequality, seemingly acts as if it has no role in fostering economic unfairness. Yet the salary gap between nonprofit and other city workers steadily widens, with few politicians raising a fuss.

As local governments fail to give nonprofits the money they need to attract and retain top-quality staff, stories of financial mismanagement and inadequate performance among individual groups regularly emerge. Blame is then attributed to the individuals in charge, exonerating politicians and the broader society for their inadequate financial support.

If a city program screws up, a politician gets the blame. But when a nonprofit performing under a city contract errs, it takes the heat while elected officials are insulated from responsibility.

It sounds like a cynical game, and yet it offers another reason why nonprofits’ share of providing public services continues to grow.

San Francisco officials could end the widening salary gap by giving nonprofit workers the same wage hikes as city workers. This would cost the city a bit more money, but it would stabilize and improve nonprofit services, and be consistent with our push for greater economic fairness.