San Francisco 2012: The Year in Review 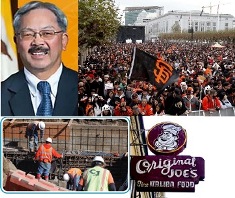 San Francisco had one of its greatest years in 2012, as the city’s job growth and vibrancy outpaced nearly everywhere else. In a single year, San Francisco committed to longterm funding for affordable housing, created a much more progressive business tax system, and finalized plans to bring the Golden State Warriors back to San Francisco in a beautiful new multi-use arena governed by an historic local hiring agreement. The year saw continued investment in Mid-Market’s revival, the imminent and soon to be reopening of two great landmark buildings (the YMCA and Hibernia Bank in the Tenderloin), the start of the Central Subway construction process, and the implementation and planned creation of more bike lanes on major thoroughfares. The city gave nonprofit workers their first raise in four years, and most groups were spared budget cuts. The Giants also won their second World Series in three years, adding to the city’s community spirit., Not all the news was good—-we saw increased shootings and violence at Sunnydale and other housing projects in the southeast part of the city, the Mirkarimi controversy created rifts between some progressives and domestic violence advocates, and rents on vacant apartments continued to skyrocket—but all in all, San Francisco had a transformative year in 2012— and 2013 could be even better.

After handily winning election in November 2011, San Francisco Mayor Ed Lee put forth an extremely ambitious agenda for 2012—and thanks to his consensus style of leadership, the city advanced as never before.

Lee took on political “third rail” issues like affordable housing funding and business tax reform and got key constituencies and the voters on board. He demanded that key city players “leave their egos at the door,” and, confounding skeptics, his approach worked.

Ask those involved with both of the above issues and they will tell you that neither happens without Mayor Lee’s leadership. Unlike so many politicians who are obsessed with getting public credit, Lee finds his reward in getting things done.

Despite Lee’s strong business community support and 70% approval numbers, in 2012 San Francisco Chronicle City Hall reporters continued their attacks on the mayor that began during his 2011 mayoral campaign. If further evidence is needed of the Chronicle’s declining impact (it has dropped out of the top 25 newspapers in circulation for the first time), Lee’s continued popularity in the face of the Chronicle’s unrelenting criticism says it all.

San Francisco’s economy revived in 2012 despite many highly publicized development projects still not breaking ground. Twitter moved into Market Hall in June 2012, joining One King’s Lane (which raised $50 million in new funding last week) and other companies thriving in their new location.

The city saw popular retailer Uniqlo open on Powell Street, historic Original Joe’s reopen in North Beach, and so many new dining establishments on Valencia Street that some are calling for a moratorium (the very raising of this issue will hopefully get entrepreneurial restaurateurs to consider opening in the Tenderloin, which is underserved both in cafes and dining spots).

New condominium construction played some part in the city’s economic resurgence in 2012, but financing problems plagued builders for most of the year (it even took Lennar until last week to get $1.7 billion in financing for its Hunters Point Shipyard and Treasure Island projects). New condos will be a far bigger factor in the local economy in 2013. With thousands of long approved condominium projects in the Eastern Neighborhoods finally in construction, San Francisco will see a building boom in 2013 that may break all past records.

New condo construction is good news for the city’s renters, who have seen rents on vacant units skyrocket as the available housing market stagnated. New condos will cause some tenants in the Marina, Pacific Heights, and other affluent areas to buy rather than rent, freeing up rental units for those with lower incomes. And considering that most condos coming on line will be initially rented rather than sold, this too adds to the rental housing stock.

Few want San Francisco to become a city where only the rich and subsidized poor can live. But these same fears were felt in the 1980’s. When I was moving to San Francisco in 1979, the lines for vacant apartments were just as long and the competition for vacant units as fierce as what we read about in 2012. We couldn’t believe we had to pay $375 for a Mission one bedroom apartment, a rate that is less than half the cost of an SRO room without private bathroom today.

San Francisco has long been an expensive city that keeps getting pricier. That’s why Prop C’s passage (the affordable housing trust fund) was so important, and why it is so critical that in 2013 House Republicans stop holding up funding for the rebuilding of public housing in San Francisco (and other cities).

Ross Mirkarimi’s saga got ample media coverage in 2012, but the episode had little impact on the city or its future (note how little has been written about the Sheriff’s office since his reinstatement). Some believe that Christina Olague lost because she voted for Mirkarimi, but until the votes were counted most saw Olague’s vote as helping her politically. Olague instead lost because London Breed had far more campaign volunteers, deeper roots in the district, and worked harder than other candidates.

Mirkarimi’s case did expose deep rooted conflicts between domestic violence groups and portions of the city’s left, which was on display during some very ugly public testimony on the night of the vote. But I think domestic violence advocates won the war despite losing the battle, and that most of the public is strongly on their side.

Lucky to Be In San Francisco

2012 was one of those years when I felt extraordinarily lucky to be in San Francisco. There is a spirit of innovation, excitement and optimism here that is not found in other cities, and San Francisco remains one of the great places to simply walk around.

While all cities have their share of people who thrive on negativity and a culture of complaint, this is not the San Francisco spirit. San Francisco has long been a city that likes to have fun, and from its rebuilding after the 1906 quake and fire through today, this spirit persists.

When thousands came to Civic Center Park to watch the final game of the 2012 World Series, I said to myself: only a great city could have such an event. We are fortunate to be in San Francisco at this time in history, and while many residents face difficulties and the city is not without challenges, it’s worth keeping the big picture in mind as we head toward 2013.