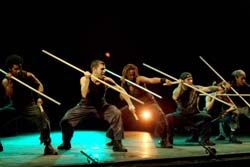 I have to admit. The first two times that I saw “Stomp” on the stage – I was less than thrilled. I found it to be dark and dreary. Most of all – I thought it was just a bunch of noise. But, times have changed. I have become younger and this production has becomes more theatrical. The set now has vivid colors. What used to be a corrugated steel background is now an intriguing set where the actors can hang from it and bang on a vast array of junk. Think of it as a human Wurlitzer Juke Box. While hanging precariously from this ingenious set – they make daring moves and remarkable sounds. Of course, these are not just your ordinary sounds – they are big, electrifying sounds. It definitely fits into the category of “wild”.

The cast have more strength than Superman. They never stop stomping, banging, throwing and doing amazing things with mops. There is even a segment using sinks – that is quite imaginative and provocative. I think you’ll enjoy the joke. This has to be the best production of the rhythm and movement show in the world.

But none of this magic on the stage would happen without these performers who put their heart and feet into it to keep the rhythm going. Stand-up and cheer for these performers: Shola Cole, Leilani Dibble, Andres Fernandez, Khalid Freeman, Louis Labovitch, Lorraine Le-Blanc, Noah Moscogian, Nick Pack, Jr., Jeremy Price, Chris Rubio and Stephen “Wacki” Serwacki. Although Stomp is an ensemble show – it would be nice to someday give the performers names on the stage – so that that audience would be able to identify their favorites. STOMP IS GENUINE BIG SUMMER ENTERTAINMENT. YEH, SEE IT!

RATING: FOUR GLASSES OF CHAMPAGNE!!!! At The Golden Gate.

BEFORE ‘GOLDA’S BALCONY’ STARTS – THE ANNOUNCER WARNS. “THERE ARE SOUNDS OF GUNFIRE AND BOMBS IN THIS PRODUCTION.” In this day and age of terrorism the warning was a wise decision because as soon as the house lights dim, Golda Meir lights a cigarette – that immediately unleashes gunfire and bombs. I think that opening was probably enough to keep us all awake during the 90 minute one woman show. Here are a couple of facts about Golda. She grew up in America and was expected to marry a nice Jewish Boy and stay at home and make Matzo Balls. As we know from History, this was not enough for her. Oh, she did get married – had children but got divorced when her strong will could not meld with her husbands sit back and wait attitude. Meir died in 1978, but her struggle lives on today and is always in the news to this day.

Tovah Feldshuh brings this difficult and dangerous time to life on the stage. She really does become Meir. At times her performance is magical. At other times she is utterly delightful and charming. “I always wondered about Moshe Dayan. He was a busy lover. Did he take the eye patch off?” And she could get to the point. “Will there ever be a time when the Arabs love their Children more than they hate the Jews?” – She says with tremendous poignancy.

Take my word for it. There is great presence on the Curran Stage. Feldshuh is an actress who draws you into the story and never lets you go. This is a riveting performance. Golda’s Balcony is moody but shines at the same time. You will want to sit with Golda on her Balcony.

SALLY KELLERMAN TOLD ME “I am a Singer!”

Sally Kellerman sings at this year’s “Help is on the Way”
extravaganza at the Palace of Fine Arts this Monday.


The time was in the eighties. Kellerman was booked into the Mocambo. I was scheduled to do a dressing room interview. She was at the dressing room mirror, brushing her hair. She never turned to look at me directly. We saw each other in the mirror. It was very bizarre. Like a movie. Sort of like “The Mirror Cracked”. Since she was at the time known as an actress in the movies – I asked her. “When did you decide to start singing?” In her best Screen Voice – She said to the Mirror. “I am a singer. I’ve always been a singer!” The interview sort of went down hill from there.

I do agree with her though. She is a singer and a damned good one, as well as being a great actress. And it is really great that she is going to be part of this years “Help is on the Way” at the Palace of Fine Arts”. This year’s show is just packed with terrific talent.

I have attended most of these shows, and believe me there isn’t a better show in town. They are staged beautifully with exceptional professional lighting. It is this Monday at 8pm. You still have time to get tickets at 415-273-1620 or the Web Site: www.helpisontheway.org.

SET CHANGES: At The New Conservatory in August look for the all male version of Dangerous Liaisons. At the Golden Gate Theater Annie tosses her red curls again in a new and refreshed version of the the fave musical. The Orpheum will do some witchcraft with the Hit Broadway show “Wicked” – and a play about famed and controversial Robert Mapplethorpe will be on one of the stages at New Conservatory. You heard it here first: In December at the Jewish Center will be a lavish tribute to composer “Sondheim”. And the best news – he will be in attendance. Tix are flying out the box office window. Don’t delay. It’s a one night thing. Ditto for “Wicked”. It’s almost sold out. GO, GO, GO, GO..to “Drunk With Love” with Terese Genecco at the New Conservatory. It’s a “Whammo” experience.

Buzz, Buzz, Buzz – we love you too at buzztatler@aol.com.