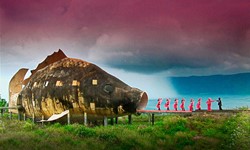 The calendar may say April 25, 2013 to May 9, 2013 will bring to S.F. Bay Area cinephiles the 56th edition of the San Francisco International Film Festival (hereafter SFIFF). But only a perusal of the SFIFF’s program of 158 films from 51 countries as well as more than a dozen live events can give a reader a sense of the wonders being offered this year. These wonders include philosopher Slavoj Zizek using “Jaws” to explain cinema’s ideology, an insider’s look at The Beatles, and “Buffy” creator Joss Whedon’s unexpected new film.

Here are some of the highlights from SFIFF 56:

Opening Night Film “What Maisie Knew” comes from “The Deep End” directors Scott Mc Gehee and David Siegel. This contemporary adaptation of Henry James’ 1897 novel deals with the titular 6-year-old’s witnessing of the unraveling of her parents’ marriage.

SFIFF’s Closing Night Film will lift the spirits of those who see film sequels as synonymous with exploitative money grabbing. “Before Midnight” is Richard Linklater’s second sequel to his memorable “Before Sunrise.” It’s been nearly 20 years since Celine (Julie Delpy) and Jesse (Ethan Hawke) first met on a train. The duo meet again as they approach middle age and talk about the relationship issues that come with growing older. Both Linklater and Delpy will appear at the screening.

This year’s Centerpiece Film offers veteran attendees a curveball, as it’s a documentary about economic inequality. Jacob Kornbluth’s “Inequality for All” examines the causes of America’s ever widening income gap. The film’s guide to this dire state of affairs is former Labor Secretary and current UC Berkeley professor Robert Reich, who will also appear in person.

Viewers who prefer high profile romantic comedies can never go wrong with a good adaptation of a Shakespearean comedy. What makes this new contemporary adaptation of “Much Ado About Nothing” particularly noteworthy is that the film’s director/adapter is none other than “The Avengers”’ director Joss Whedon. In addition, the film’s cast includes actors from Whedon’s TV series, such as Nathan Fillion. No word yet on whether Whedon or any of his actors will appear in person.

Another hot ticket SFIFF program (which has sadly already sold out of advance tickets) is the 10th State of Cinema Address. Speaking on the intersections of contemporary culture, society, and cinema is soon to be retired “Side Effects” director Steven Soderbergh. Hopefully, the legendary indie director will provoke audience members with his criticism of the “tyranny of narrative.” Interested readers should get into this program’s Rush line early.

It’s doubtful there will be Rush lines of viewers having an attention span capable of handling a five-hour film. Yet those adventurous souls willing to watch Mikko Niskanen’s “Eight Deadly Shots” will have the rare opportunity to catch what Aki Kaurismaki called a masterpiece of Finnish cinema. This Zolaesque drama observes without judging what spurs a poor farmer to commit a terrible crime. Viewers preferring to make a five-hour cinematic commitment under a familiar filmmaker’s wing will opt for Kiyoshi Kurosawa’s new epic “Penance.” It concerns a mother who tries to unravel a 15 year old kidnapping which resulted in her daughter’s death. Key to the mystery is her dead daughter’s four surviving but emotionally scarred childhood friends.

“Inside The Drunken Mind of Derek Waters” offers comic drunkenness and no uber-violence via a live show from the creator of the “Drunk History” series.

Another example of twisty thinking is Sophie Fiennes’ documentary “The Pervert’s Guide to Ideology.” In it, philosopher and cultural critic Slavoj Zizek uses “Jaws” and “Brief Encounter” among other films to consider cinema’s ideological underpinnings.

Unusual cinematic visions may be a polite way of describing unique decidedly non-commercial films. “Peaches Does Herself” is director/pop anti-star Peaches’ performance documentary/opera, which spectacularly delivers choreography, music, and sexual exuberance guaranteed to demolish more staid viewers’ aesthetic cages. “Leviathan,” from director Verena Paravel and “Sweetgrass” co-director Lucien Castaing-Taylor takes an abstractly immersive approach to its portrait of the operations of a fishing trawler in the dead of night. True crime re-enactments will no longer feel like entertainment after viewers watch Joshua Oppenheimer’s “The Act of Killing.” In it, Indonesian death-squad chiefs inspired by American gangster films recreate their killings of political enemies.

Creative recreation of a different sort describes “Waxworks,” this year’s silent film/contemporary musician presentation. The source material is a silent German expressionist film about creepy exhibits in a wax museum, with performances by such famed silent film stars as Emil Jannings and Conrad Veidt. The live score is performed by Mike Patton, Scott Amendola, Matthias Bossi, and William Winant. The musicians had previously worked with such acts as Lou Reed, Faith No More, and Siouxsie and The Banshees.

For those whose musical tastes run towards more popular fare, Ryan White’s documentary “Good Ol’ Freda” will set viewers screaming. The titular Freda is Freda Kelly, The Beatles’ former secretary who witnessed the group’s climb to fame and its collapse.

(For further information about individual films and purchasing advance tickets, go to the SFIFF website http://festival.sffs.org . )