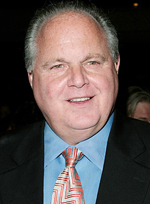 What’s funnier than vice presidential candidate Sarah Palin winning mother of the year for her parenting skills in raising Bristol and Track? How about conservative radio talk show host Rush Limbaugh accusing someone of sexism? It’s not a Saturday Night Live skit.

Limbaugh, the darling of the christian right set, has leveled charges of “sexism” against the committee that is investigating Alaska Governor Palin’s firing of Walter Monegan, the state’s former public safety commissioner. Palin allegedly fired Monegan because he wouldn’t get rid of a certain state trooper, who happened to be her sister’s ex-husband.

To no one’s surprise, Limbaugh has rushed to Palin’s defense. Limbaugh was a big fan of Palin even before McCain chose her as a running mate. What’s surprising is that he’s suddenly discovered the “S” word: “This is pure sexism in Alaska on the part of these old boys trying to get rid of Sarah Palin,” Limbaugh said, “and she didn’t put up with it, and she didn’t bend over and let them have their way.”

If Palin didn’t “bend over,” it’s certainly not because she’s a feminist. She’s a fundamentalist christian who goes to a church where folks talk in tongues and try to convert queers. She believes in a gun (and moose) in every pot and creationism in the schools. In other words, she’s a chip off the old Limbaugh block.

Limbaugh has never been a fan of feminism or the fight against sexism. In fact, he has made many a sexist remark in his long career of preaching hate on the airwaves. He has used every opportunity to knock women’s rights and abortion advocates. He even once proposed that “feminism was established to allow unattractive women easier access to the mainstream of society.” He called this his “Undeniable Truth of Life No. 24.”

Another “Undeniable Truth of Life,” according to Limbaugh, is that “women should not be allowed on juries where the accused is a stud.” Would that include Palin? And what about men who face an accused who is a hot babe?

On many occasions, Limbaugh has referred to abortion rights advocates as “feminazis.” He said that these women want as many abortions as possible.

Limbaugh accusing someone of sexism is like the pot calling the kettle black or George Bush calling someone a liar.