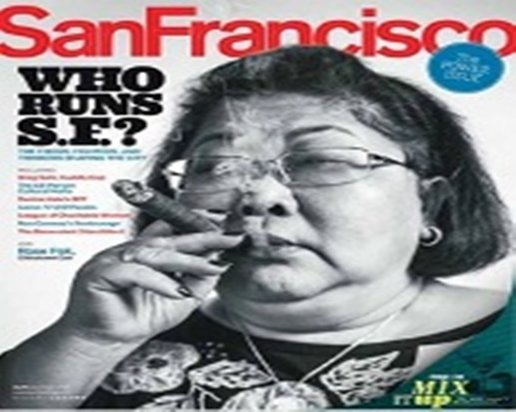 SF Magazine had less positive profile of Pak in Dec. 2012

Despite battling kidney problems, Rose Pak has achieved a career first: she has won popularity among segments of the white left and media that have long criticized her.  How did Pak do this? She told SF Magazine’s Joe Eskenazi that Mayor Lee “had no balls” and that his election as the city’s first Chinese-American mayor was “the biggest disappointment” of her life.

Pak’s words elevated her status among Lee-haters overnight. Those who long rejected her positive statements about Ed Lee now see Pak as the voice of “truth” about San Francisco’s mayor.

Not to put Pak’s new popularity at risk, but let’s examine some facts excluded from the interview.

Eskenazi writes that Lee’s four years have not worked out as Pak hoped: “She has increasingly complained that Lee is neglecting the needy residents of Chinatown, “ and  “has chafed at the mayor’s closeness to supporters like Ron Conway and other ascendant tech elites. “

Yet omitted from the article is Pak’s huge fundraising for Lee’s first re-election event in January 2015. Pak raised $220,000 in $500 checks—a truly mammoth undertaking—after Lee had already spent four years in the mayor’s office.

If Pak were really so dissatisfied with Lee’s treatment of Chinatown and his closeness with tech folks, why raise $220,000 for his re-election?  Why hold a fundraiser for him at all?

The answer is that Pak’s current disappointment with Lee has nothing to do with his policies. Rather, Pak and others in Chinatown feel betrayed by Mayor Lee’s appointment of Julie Christensen instead of Cindy Wu as the new D3 supervisor.

I was with Rose in that fight. I strongly urged the mayor to appoint Wu. Soon after his Christensen appointment I joined Pak in a small meeting with the mayor where we both strongly criticized his action.

I understand why Pak felt so betrayed by that appointment. But let’s not reinvent history and claim that Pak was seriously disappointed with the mayor based on his policies during his four years in office prior to that action.

Or that her disappointment has anything to do with the mayor’s current policies.

Rose Pak complains about every politician, even her close ally Willie Brown. That’s part of her skill at keeping her political allies accountable. And if you want to know how Pak treats allies that she feels have deeply betrayed her, ask Art Agnos.

I’m glad that many longtime Pak critics are now singing her praises. I think I’ve written more positive stories about Pak than anyone outside Chinese media, and its good to others coming around.

Let’s hope Rose makes a speedy recovery because San Francisco will be a lot duller without her.