Rights of Passage – A World Premiere 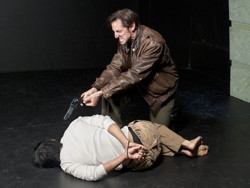 The play is glorious to look at. You will be pleased and enchanted with the visuals as traditional storytelling, includes puppets, masks and wonderful bright colors. You become enraptured with the beauty and different cultures. That’s the upside. The downside is how Gay people in each country struggles to be able to love one another. For instance, there is a young Gay Man who tries to balance his gayness with Sharia law. Not an easy task.

Yes, we may all want love, but it is doubtful that we will find love everywhere. Some nations are just stuck in their space and that’s the way it will probably be forever. Trying to find equal rights around the world is like looking for a needle in a hay stack. Like one Boy says: “Loss is Love – Love is Lost!” Bullies don’t recognize Love between the sexes. It’s not even that easy in the United States let alone the whole world. Hate is everywhere.

Ed Decker and Robert Leone worked on this play for many years. And they bring to the stage a new enlightenment. The Director by Arturo Catricala brings to the stage hundreds of amazing things to see at NCTC!