Richmond Shows How Progressives Can Win 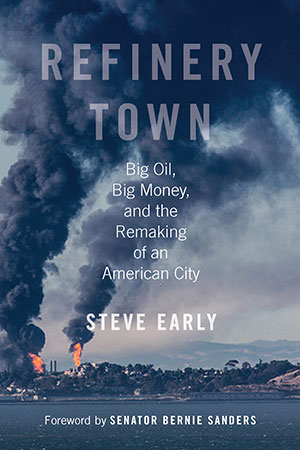 As millions look to further social and economic justice during the Trump presidency, many will seek change at the local level.  Steve Early’s new book on the progressive political transformation of Richmond, California, Refinery Town: Big Oil, Big Money, and the Remaking of an American City,” offers a good start. Early shows how activists combined hard work, smart strategies and progressive politics to wrest control of their city from its control by  Chevron, which long  treated Richmond like a Company Town.

Unfortunately for Richmond residents, being Chevron’s company town was not exactly an honor. To the contrary, it meant enduring high crime, poverty, violence, a poor school system and regular exposure to environmental disaster. Non-Richmond residents are not likely aware of just how often Chevron refinery fires occur. Early experienced a Level 3 fire, the highest level of danger, soon after moving to Point Richmond in 2012. That fire required 15,000 Richmond residents (15% of the city) to stay inside until the smoke allegedly no longer posed a health hazard; many flooded hospital emergency rooms instead.

The health impact of Chevron’s operations created a potential electoral base for political change. But Chevron was smart. It boosted its positive image by prominently advertising donations to local nonprofits, all while using its political clout to shortchange Richmond for services. Chevron aligned itself with the city’s African-American establishment, whose members presided over the city, and with the Contra Costa Labor Council.  With the official black community and labor on its side, Chevron created an identity as a company that truly cared about the working people of Richmond.

In light of Chevron’s power, how could a multiracial, primarily low-income coalition of Richmond activists stand a chance? This is the remarkable story Early tells.

Early does so in a book that reads more like a long magazine article than a dense political tract. One keeps turning the pages to see if and how the good guys prevail.

As Early shows, a successful local political insurgency starts with people and strategies. In Richmond, Gayle McLaughlin moved to California in 2000 and brought her progressive, Green, grassroots politics to Richmond. McLaughlin ran for Mayor of Richmond in the November 2004 election on the campaign slogan, “Another Richmond is Possible.” Voters believed it was, and gave McLaughlin the mayor’s seat and progressives a foothold in city politics.

Central to McLaughlin’s success was the formation of the Richmond Progressive Alliance (RPA) by Juan Reardon and others in the years from 2003-2004 (Reardon was McLaughlin’s campaign manager). The RPA became the consensus progressive vehicle for Richmond politics, recruiting candidates, running campaigns and taking principled positions.

Having such a citywide vehicle outside the Democratic Party has regularly proven a key to progressive success in local politics. I personally experienced this in Berkeley in the 1970’s with Berkeley Citizens Action, and progressives took control of Santa Cruz city government by also creating their own political organization. Bernie Sanders (who wrote a forward for Early’s book) followed the same path in transforming Burlington, Vermont politics.

That’s why beyond gaining insights on Richmond politics, anyone interested in understanding how local political organizations address challenges around racial diversity, empowerment, political accountability, and other issues should read this book. I have never read a more honest account of the challenges faced by local progressive political groups (this honesty may be linked to Early’s close relationships with many RPA activists who talked to him with a sense of trust).

For example, the RPA realized that its core volunteers were overwhelmingly retired white people. Yet RPA’s membership was extremely racially diverse. This imbalance occurred because retired whites had more time to volunteer than the generally younger African-American and Latino members who had jobs and/or children that took up their time.

Many political groups would have looked the other way on this issue. And in political groups people join to set themselves up for their own future campaigns (particularly common in San Francisco), questions about whether volunteers reflect the membership would not arise.

But RPA is different. It has a nucleus of seasoned activists who understand that progressive groups must reflect progressive values. For example, Mike Parker who moved to Richmond in 2008 after activist experience from the Free Speech Movement in Berkeley in 1964 to decades on the shop floor of Detroit. Parker knew from his long experience that winning elections did not mean that the racial dynamics of the RPA volunteer base did not have to change. The group then openly addressed the problem.

Early chronicles Richmond campaigns from 2004 through 2016. He shows how Chevron’s political influence steadily declines. The one exception is the 2012 election in which a soda tax on the ballot unified the longtime Richmond power structure—Chevron, the NAACP, and the Contra Costa Labor Council—behind a successful $2.1 million opposition campaign.

Richmond was ahead of other cities on the soda tax, just as it was on foreclosure legislation and hiring a progressive gay man as Police Chief of a heavily minority city with only a small gay presence. Richmond also acted preemptively against future gentrification by enacting rent control first by the Council and then by the voters last November.

Proving that good policy is also good politics, Richard progressives took control of Richmond in 2016. Mayor Tom Butt, elected in 2014, is not an RPA member and has become the city’s leading opponent of rent control.  But the city’s weak mayor form of government vests power in the Council majority, which RPA controls.

Having written a book on San Francisco’s Tenderloin neighborhood—-and how its anti-gentrification strategies apply to other cities and neighborhoods—-I see local activism as expanding social and economic justice outside the power of presidents.

I raise this because Steve Early has written a truly invaluable book on a tremendous urban political achievement. The importance of national resistance to Donald Trump does not reduce the importance of local struggles such as that in Richmond.

Early starts his book, “On the evening of November 4, 2014, there wasn’t much for liberals and progressives to celebrate anywhere in the United States.” He could have made the same statement about November 8, 2016. That Richmond progressives prevailed in both elections speaks volumes as to the power of local activism, and the need for progressives to rely more on the grassroots tactics that work in cities like Richmond for national campaigns.

Steve Early has brought forth another powerful chronicle of how progressives can win against big money and powerful interests. At a time when people are looking for inspiration, Refinery Town could not have come out at a better time.

Randy Shaw is Editor of Beyond Chron. He discusses local grassroots activism in The Tenderloin: Sex, Crime and Resistance in the Heart of San Francisco and in The Activist’s Handbook.