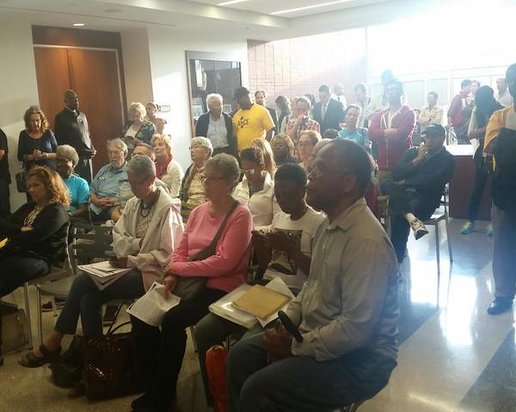 The Bay Area city of Richmond made history Tuesday night, as the City Council voted 4-1 to enact rent control and just cause eviction laws. It is the first time a city has passed rent control in thirty years. It is unquestionably the most important step Richmond can take to combat displacement and gentrification.

Tenants Together’s article on the victory was our lead story yesterday. This article focuses on the victory’s broader lessons and how this mammoth victory for tenants came about.

By enacting rent control and just cause eviction laws, Richmond, California is saying that displacement and gentrification are not inevitable but instead can be limited through the political process. This is a point I have made time and again while promoting my new book on San Francisco’s Tenderloin neighborhood,   which also protected itself from gentrifying through pro-active strategies.

As I argue in my book, cities and neighborhoods must move to forestall gentrification before facing the type of transformative projects and/or mass evictions that reshape communities. Once such are underway, it is too often too late.

Richmond faces a core challenge similar to the Tenderloin in the 1980’s in that it needs economic development and the wholesale displacement of low-income tenants has not yet occurred (though proposed 20% rent hikes in two large apartment buildings helped fuel the rent control drive). Yet this is precisely when activists need to foresee the future and enact laws protecting tenants.

Most books on gentrification cover New York City. Their typical message is the “inevitability” of gentrification as an outgrowth of affluent residents demanding to live in certain neighborhoods.

Yet downplayed in this common analysis are the political decisions—such as Mayor Bloomberg’s upzoning 35% of the entire city— that expedited gentrification. Had these upzoned communities (particularly designed to increase heights) been downzoned like the Tenderloin was in the 1980’s, the rapid gentrification that followed would not have occurred.

In a booming Bay Area economy, Richmond’s future as an economically diverse city depends on protecting its tenants from displacement. We know from San Francisco, Berkeley, and Oakland’s experience that rent control and just cause eviction protections don’t limit prices on single family homes or on vacant rental units. But they do keep the vast majority of longterm tenants in place.

How Did Activists Succeed?

The Richmond Progressive Alliance laid the groundwork for this week’s historic victory, building a progressive base that elected Gayle McLaughlin to two terms as mayor (she now serves on the City Council). Three of the four Council votes for rent control/just cause eviction came from RPA-backed candidates, with the fourth backed by the community organization, Alliance of Californians for Community Empowerment (ACCE). McLaughlin has helped do for Richmond what Bernie Sanders once did for Burlington, Vermont; her savvy decision to immediately move to call off debate once the 4th vote for rent control was secured shows she knows how to win.

The Richmond ACCE chapter emerged following the dissolution of Richmond ACORN, and includes some of the same people. I worked with the Richmond ACORN group over a decade ago on housing issues, and it has deep roots in the city’s Latino and African-American communities. ACCE members mobilized for Tuesday night’s hearing, and were critical to the victory.

SEIU 1021, under the political leadership of Alysabeth Alexander (who got her tenant organizing start working with me in the Tenderloin), made Richmond rent control and just cause eviction a priority. I cannot emphasize enough how often tenant victories depend on labor support, and this campaign proved this again. Gabriel Haaland, known for his years of tenant advocacy in San Francisco, was a key part of SEIU’s Richmond rent control campaign.

Tenants Together proved the new kid on the Richmond block, and their expertise in rent control laws and statewide capacity made a huge difference in the struggle (Tenant Together tweets also helped those of us not at the hearing to follow the proceedings). Tenants Together leader Dean Preston (also a former colleague of mine at the Tenderloin Housing Clinic) understood the stakes for Richmond tenants and the campaign was a top organizational priority.

If you support tenants’ rights and are not a Tenants Together member, you need to join now.

When you look back on California rent control campaigns in the 1970’s and 1980’s, Tom Hayden’s Campaign for Economic Democracy (CED) was a statewide group providing staff and financial support for local campaigns. California’s tenant movement has long suffered by the absence of such a statewide tenants group, and Tenant Together’s work in Richmond, Fresno, San Diego and other cities shows it is  playing this critical role.

The Bay Area housing crisis has left many in despair. The victory in Richmond shows again that it is time not to mourn, but to organize.