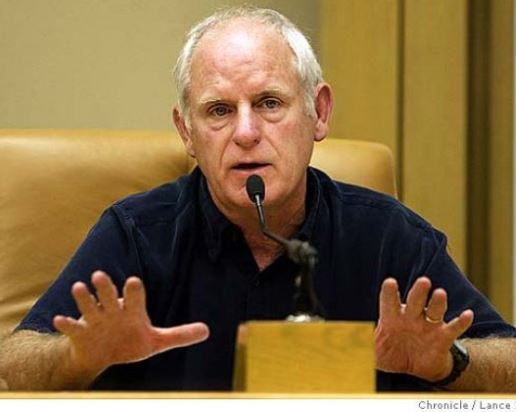 Tom Butts is running for mayor of Richmond

Municipal politics in Richmond, California is not for the faint-hearted, the thin-skinned, or those easily unsettled by last minute line-up changes. Late last week, on the eve of the filing deadline for city candidates, a longtime city council member not up for re-election this year decided to throw his hat into the ring for mayor.

Arkansas native Tom Butt, a 70-year-old architect, Vietnam veteran, and 41-year resident of Pt. Richmond seeks to replace Gayle McLaughlin, the well-known California Green and leader of the Richmond Progressive Alliance (RPA), who is subject to a two-term limit as mayor.

Butt is not part of the RPA but frequently allies himself with its members on the city council. When RPA first emerged a decade ago, Butt applauded the idea that “a seemingly unlikely group of Greens, Latinos, progressive Democrats, African-Americans, and free spirits” could forge the “first Richmond coalition in memory united over ideals rather than power and personalities.”

Butt’s sudden decision to run for mayor this year came eight months after RPA activists, including McLaughlin, first tried to persuade him to join forces with them, in more timely fashion. McLaughlin and Vice-Mayor Jovanka Beckles are currently seeking election to two of the four Richmond council seats up for grabs. A third member of their RPA-backed “Team Richmond” is retired teacher Eduardo Martinez, who was runner-up in the council race two years ago.

The RPA’s private overture to Butt last winter was motivated by the need to unify liberal and more left leaning voters in the face of an unfolding multi-million dollar push by Chevron, the city’s largest employer, to install a more compliant mayor. Instead of committing to run for that office in 2014–in tandem with like-minded RPA council candidates—Butt ended up throwing his support to Democrat Charles Ramsey, president of the Contra Costa County School District Board. Ramsey seemed to him, at the time, to be the best bet for defeating Chevron’s expected candidate, 82-year old Nat Bates, senior member of the Richmond council, a reliable business booster, and regular adversary of Butt on key council issues.

After Ramsey raised more than $100,000 for his mayoral campaign, however, he suddenly pulled out of that race this summer, announcing his candidacy for the council instead. In the meantime, the RPA had to come up with a proposed replacement for McLaughlin. To the great benefit of its “Team Richmond,” the RPA tapped Mike Parker, an experienced community organizer and articulate critic of Chevron. A longtime auto union activist in Detroit, Parker is now retired from Chrysler and teaching local community college students in Contra Costa County how to become skilled industrial electricians and technicians.

As a mayoral candidate, Parker spent the last five months energetically and effectively canvassing door-to-door and recruiting volunteers. He enlisted the many small, non-corporate donors necessary for RPA candidates to take full advantage of Richmond’s system of local public matching funds (capped at $25,000). He also racked up a series of helpful labor endorsements, including from Service Employees Local 1021 (which represents Richmond city hall employees), the California Nurses Association, National Union of Healthcare Workers, Amalgamated Transit Union, Communications Workers Local 9119, and others with members in Richmond.

Late last week, to his considerable dismay, Parker found himself hurriedly conferring with Butt and getting what RPA strategists hope will be sufficient commitments from him about campaign coordination and future council cooperation. On Friday morning, Parker announced his withdrawal from the mayor’s race to avoid a November election scenario in which “the progressive vote would likely be split.”

Parker declared he was still going to be “an active part of ‘Team Richmond” this fall. He promised “to work very hard to continue the progress we have made in Richmond” by electing candidates “who represent a different kind of politics, based on organized people-power– not on corporate power.” He reminded some in his own camp, who remain wary and resentful of Butt, about the overriding “need to challenge Chevron-backed candidates and those unwilling to stand up against Chevron when representing the community.”

A council member for 19 years, Butt graciously praised Parker’s decision to bow-out in his favor and welcomed Mayor McLaughlin’s support. Echoing a favorite RPA campaign theme this year, Butt declared that “Richmond is better off in every way—safer, cleaner, healthier, quieter, and greener…We need to keep up this drive for excellence.”

Prior to Parker’s departure, Councilor Bates, a failed candidate against McLaughlin in a 3-way mayoral race four years ago, had been very gleeful about the prospect of a divided left-liberal field that would be to his benefit. (A third, but little known candidate remains in race, management consultant Uche Uwahemu, a relative newcomer to Richmond politics.)

In recent email blasts at his opposition, Bates was already conflating “the radical RPA”–which is “so hostile toward Chevron and businesses in general”–with his council nemesis, Butt, who is himself a local business owner. Bates accused Butt of being a “master extortionist” in recent negotiations with Chevron about the funding of a “community benefits agreement” necessary to secure city approval of a controversial refinery modernization plan. (That project was approved by a 5-to-0 council vote on July 29; Bates and Butt were both in favor but McLaughlin and Beckles abstained because they felt that greater Chevron concessions, financial or otherwise, could have been obtained.)

Dissing what it took to get $90 million for various city programs over the next ten years does not appear to be a winning strategy in a community well aware of Chevron’s “ability to pay” (and past underpayment of local property taxes). So at the “grand opening” of his campaign headquarters on Saturday, Bates told his largely African-American crowd of 30 that Butt and two other council members, who worked out the final details of the Chevron deal, pushed their own environmental agenda and failed to “show respect” for the broader Richmond community. Declaring himself the representative of “all of Richmond, not one part of it,” Bates said the settlement with Chevron “had nothing to do with the best interests of all of Richmond.”

Bates own storefront gathering on Macdonald Ave. was certainly inclusive, but not in a reassuring way. Present to support his campaign was Mark Wassberg, a city council meeting regular best known for his homophobic diatribes against Beckles, Richmond’s first openly gay elected official. In an editorial over the weekend,The SF Chronicle criticized Wassberg by name and urged the entire “Richmond community to…shame those who would distract from the work of conducting the public’s business to broadcast their own hateful message.” There was no such community shunning or shaming of Wassberg at the Bates event on Saturday, the same day that editorial appeared.

However, with three months to go before election day, there’s still time for the aged African-American Democrat to ditch such embarrassing political baggage. With high-priced consultant help and multiple mass mailings, Bates will also be fine-tuning the pro-Chevron message he has been delivering so dutifully for years. And Richmond voters will most certainly be hearing more from him (and Big Oil’s “independent expenditure” committee) about the last-minute election compact between RPA and Butt, birds of a different feather forced to fly more closely together, for community benefit not funded by Chevron.

(Steve Early lives in Richmond and belongs to its ten-year-old Progressive Alliance. He is the author of Save Our Unions (Monthly Review Press, 2013) and is now writing a book about the emergence of progressive politics in Richmond. He can be reached at Lsupport@aol.com)