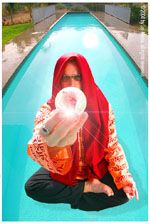 Director Richard Roll’s “Down Dog” is both a satire and celebration of the recent explosion of Los Angeles “yoga culture” and the proliferation of ersatz “gurus” capitalizing on the zeitgeist of the times – the West’s current fascination with the methods, philosophies and cultures of the East. Essentially “Shampoo” in a yoga studio, Down Dog transports us to the yoga world of Guru Dave, a charismatic “yogi-to-the-stars” at the peak of his Angeleno notoriety.

A legend in his own mind, Dave has a talent for espousing “spiritual truths” before a rapt cult following of beautiful women, but he misuses his ethereal charisma to philander his female tutelage and maximize his ego, wealth and fame in the City of Lights. Indeed, the World is his oyster. Then again, he just can’t commit.

His biggest problem? Dave talks the talk, but can’t walk the walk. Dave’s perfect Harem Universe of asana, women and song is rocked with the introduction of Grace, a truly enlightened African American woman with the face and stature of Buddha. Our “Bodhisattva” sets out to help Dave achieve the next level in his spiritual development. She confronts Dave with his duplicity and provides him with the challenge of his lifetime. Should he fail, his fiefdom will collapse.

Is Dave up to the task? Only Grace’s guru, the Great Ascended Master Sri Guru Babajiji Yogananda knows the truth.
Down Dog hilariously pulls the covers on our duplicitous false prophet while artfully celebrating the allure of the ancient ways of the East that currently captivate the ethos of our modern age.

Don’t miss the film my chums at The Washington Post called “a little hit.”

Down Dog will make its San Francisco premiere as part of the upcoming SAN FRANCISCO WORLD FILM FESTIVAL (“SWIFT”), September 29 – October 2, 2005. It’s first screening will be Saturday, October 1 at 12:00 p.m. at the CINEARTS EMPIRE THEATRE, 85 West Portal Avenue in conjunction with and just prior to the documentary on Burning Man called “Dust Devils”. In addition, the festival will be hosting a 5 minute yoga class in the theatre prior to the screening.