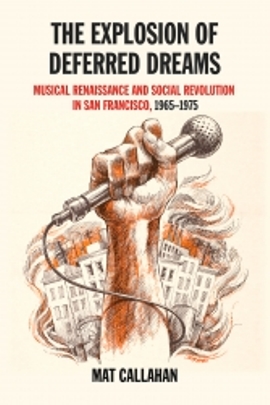 As the fiftieth anniversary of San Francisco’s “Summer of Love” begins, Mat Callahan wants us to question its myths. Young denizens of the city weren’t wearing “flowers in their hair,” weren’t that “gentle,” and didn’t all live in Haight-Ashbury. In fact, he contends, “there was no ‘Summer of Love’.” Rather, as Callahan quips, it “was a media creation that passed into popular usage the same way Tampax became the generic name for a sanitary napkin.”

Instead, Callahan seeks to return the revolutionary ethos of music and SF, joined by legions of young people also desirous of radical change. They fought on multiple fronts in social movements—most obviously, in support of the civil rights movement and against the US war in Vietnam. Indeed, social movements of a shocking variety, populated mostly if not exclusively by young people, emerged to challenge “the system,” and they were led by and danced to the music. They sought to remake race relations, culture and society, really their entire world.

Written well before the election of Donald Trump, Brexit vote, growing authoritarianism in Turkey, and the rise of fascist parties from Austria to Denmark to France, this book sure seems prescient. Its publication was timed for release in 2017 to take advantage of what, no doubt, will be immense heat if not light during this year’s commemorations of the Human Be-In, Monterey Pop Festival, and “Summer of Love,” all connected to San Francisco.

Yet as annoying as the author finds stereotypes of 1960s counterculture, he agrees with Scott McKenzie (writer of the eponymous song) that they saw themselves as revolutionaries. The conglomeration of activists, artists, and allies in San Francisco made it one of the most important cities in the nation, even world, in the Sixties. They launched themselves against cultural, economic, musical, political, and social barricades. Callahan—a native son, musician, and activist—wants people to think deeply about the revolutionary impact of music on the politics of the Sixties. Callahan celebrates this artistic and political spirit that raised consciousness and promoted human liberation. Understanding what happened then and there just might allow us to win the revolution the next time conditions are ripe.

Readers beware: this book is not for those wishing for another day-glo daydream of the Merry Pranksters, Grateful Dead, and LSD. Instead, it is a deep, philosophical-historical meditation about the revolutionary potential of music in San Francisco. Parts of the book feel like a slog and it could have been cut by a quarter. Those who stay the course will be rewarded for Callahan knows of what he speaks.

Callahan was a SF-born “red-diaper baby.” His father participated in the peace movement and ran with Paul Robeson. His mother, inspired by the revolutionary dance theoretician Isadora Duncan, joined the Communist Party and danced professionally. His stepfather worked on the SF waterfront and belonged to Local 10, the Bay Area branch of the International Longshoremen’s & Warehousemen’s Union (ILWU), one of the most powerful, leftwing unions in 20th century America.

In 1964, Callahan came of age. Before dawn, one day that year, his stepfather awoke Callahan and his brother to drive across the Bay Bridge to the University of California in Berkeley. His dad wanted his boys to see hundreds of student activists in the Free Speech Movement be hauled off to jail.

Even more impactful, that same year a revolution occurred in rock ‘n’ roll music. The Beatles’ appearances on the Ed Sullivan Show launched Callahan onto a new trajectory—as a guitarist. Though not discussed, he later became a professional musician in several popular Bay Area bands. One that he fronted, the Looters, opened for the Grateful Dead at its New Year’s Eve show, in 1987, in Oakland. Given his radical upbringing and music resume, Callahan’s bonafides are undeniable.

Callahan’s book thoughtfully, at times brilliantly, weaves together three threads—music, politics, and San Francisco—that served as harbingers of global revolution between 1965 and 1975.

While art is a crucial aspect of humanity, Callahan convincingly argues that music became the premier art form of the generation that came of age in The Sixties. The creating, listening, and performing of music (not just the lyrics that too many fixate upon), inspired millions of young people to reject American-style capitalism and politics.

The new music that emerged in San Francisco in the mid 1960s offered liberation from the gerbil’s treadmill of suburban materialism as well as the authoritarian nature of Soviet-style communism.

The best parts of the book focus upon the incredible flowering of music in this particular time and place and why this was, indeed, revolutionary. The Jefferson Airplane, Grateful Dead, Quicksilver Messenger Service, Sly and the Family Stone, Big Brother & The Holding Company (Janis Jopin’s band), Tower of Power, Santana, Taj Mahal, and Credence Clearwater Revival all receive quite thoughtful analysis. So do lesser-known but important local bands including the Charlatans, Sons of Champlin, Malo, and Great! Society.

These artists directly challenged the industry that controlled music. For millennia, peoples around the world have created music. However in the early 20th century, Callahan contends, for-profit corporations hijacked music and turned it into homogeneous, commercialized, apolitical pop. In SF in the Sixties, though, a new generation refused to let producers and engineers dictate their sound. They refused to accept orders from corporate executives that their songs be no more than three minutes long. They played for the liberatory joy of creating and sharing art rather than to get rich.

SF musicians and those who danced to this music saw themselves building a new society. Bands like the Airplane and the Dead regularly played in public parks for free. Importantly, they played countless benefit concerts in allegiance with the incredible range of social movements exploding in the Bay Area and across the land: The Southern civil rights movement and Bay Area variants, opposition to the war in Vietnam and draft, solidarity with the United Farmworkers of America (UFW), and dozens of other social justice causes all received mighty support from Bay Area musicians and listeners.

Though the author fixates on the Bay Area, he appreciates that many other artists, such as the Chambers Brothers in their epic “Time Has Come Today,” embodied the new spirit and values. He has a historian’s grasp and musician’s appreciation for many of the antecedents of Sixties rock so discusses everyone from Sister Rosetta Tharpe to Pete Seeger. He understands that young people in New York, Paris, Mexico City, Prague, and countless other communities also built this struggle.

His knowledge of San Francisco is deep and wide, earned from many decades of a life lived there. Thus, he can wax eloquently upon: the Beats and longshoremen of North Beach; the Chinese, Filipinos, and other Asians who fought to prevent gentrification in the International Hotel struggle; Carlos and brother Jorge Santana who formed bands in the Mission District, as well as; the influence of China Books, the only official bookstore of communist China in the United States.

He discusses the centrality of the civil rights movement and Black Panther Party in Oakland and various SF neighborhoods including the Fillmore and Hunters Point. He fully appreciates that race is the central paradox of US History, a nation committed to equality that systematically denies millions equal treatment.

So, too, the SF Mime Troupe, which pioneered much of the spirit of this new politics. Teatro Campesino, which applied the Troupe’s radical politics and methods to aiding Chicano farmworkers, and the Diggers (creator of the Free Stores) with their anti-capitalist ethic and use of spectacle all receive attention.

He writes of the emerging radicalism of young people in SF high schools and at San Francisco State, which non-locals might be less familiar with (compared to Berkeley and nearby Stanford). SFS students planned and carried out not one but two occupations of Alcatraz Island, populated the Haight and other neighborhoods, and pulled off the longest student strike in US history.

These revolutionaries were working class and of every color and creed. African Americans taking their centuries-long protest of racism to new heights. American Indians invoking the resistance of their 19th century ancestors. Asian Americans in what was then, at least, their unofficial American capital. Chicanos, Cubanos, and Central Americans. Working class whites. Women. Homosexuals and sex radicals. Environmentalists. It can be easy to forget the breadth and depth of the social movements that erupted in the 1960s and carried well into the 1970s.

And he repeatedly and convincingly hammers home how much local people drove the musical and political innovations, later picked up by those who moved to SF or built their own scenes in their own places.

Thus, despite his dislike of the 1967 hit “San Francisco,” Callahan cannot deny the song got a few things right. After all: “There’s a whole generation/With a new explanation
People in motion.” Yet Callahan takes exception that it was a “love-in.” Instead, young people in this city, nation, and world tossed their agendas into a seething cauldron with the desire to overthrow “the system” and “change the world.” They believed themselves revolutionaries and helped lead a struggle that exploded—globally—in 1968.

This book is periodically fascinating, sometimes fun, and often educational but hardly “light.” How could it be when the catalog of philosophers discussed includes: W.E.B. Du Bois, Kenneth Rexroth, Simone de Beauvoir, Karl Marx, Herbert Marcuse, Michael Denning, Mao Zedong, and Ngugi wa Thiongo’o. Callahan deserves a commendation for thinking deeply about the philosophy of music and revolutions though some readers may get lost trying to follow him down his long and winding philosophical roads.

In this endeavor, he builds upon his last book The Trouble With Music (AK Press, 2005), a scathing look at the “music industry.” The industry, of course, is profit-driven and Callahan believes that capitalism destroys music, the people who make music, and the people who listen to it.

Callahan’s dislike of Bill Graham, in particular, bleeds through the pages. A man with great business and marketing skills enriched himself while co-opting the revolutionary potential of the music. By contrast, Callahan celebrates those who make music, emerging organically in communities like his home city. He showcases the Family Dog—the anti-commercial, anti-Graham, music producers of legendary Bay Area shows, including the 3-day Trips Festival at the ILWU Longshoremen’s Hall in 1966.

At times, Callahan’s diatribes can become tiresome even if one shares his views. He apparently has an entire shedful of axes to grind. He devotes two pages, for instance, to explaining why the “Summer of Love” did not exist despite timing his book for its fiftieth anniversary. The book’s first appendix devotes itself to an “Inventory of Falsehoods.”

Nevertheless, this essay shall close, as does the book, hopefully. Callahan writes, “Humanity’s liberation is the not yet explored so deeply by philosopher Ernest Bloch. The not yet is the wellspring of art.”

Local musicians like Callahan helped turned San Francisco into a seething hotbed of revolutionary potential that rocked the world. They sought to destroy hidebound traditions and replace them with radical, egalitarian values. Although “the system” managed to reassert control, obviously the struggle continues. People in every city and country retain the potential to break our collective chains. The music and musicians of San Francisco, Callahan asserts, show us the way forward.

Peter Cole is a professor of history at Western Illinois University. He is the author of Wobblies on the Waterfront: Interracial Unionism in Progressive Era Philadelphia and at work on Dockworker Power: Race, Technology, and Unions in Durban and the San Francisco Bay Area. He writes on the history of labor unions, port cities, race matters, radicalism, and politics. He tweets from @ProfPeterCole