Reviews From The 2019 Silent Film Festival 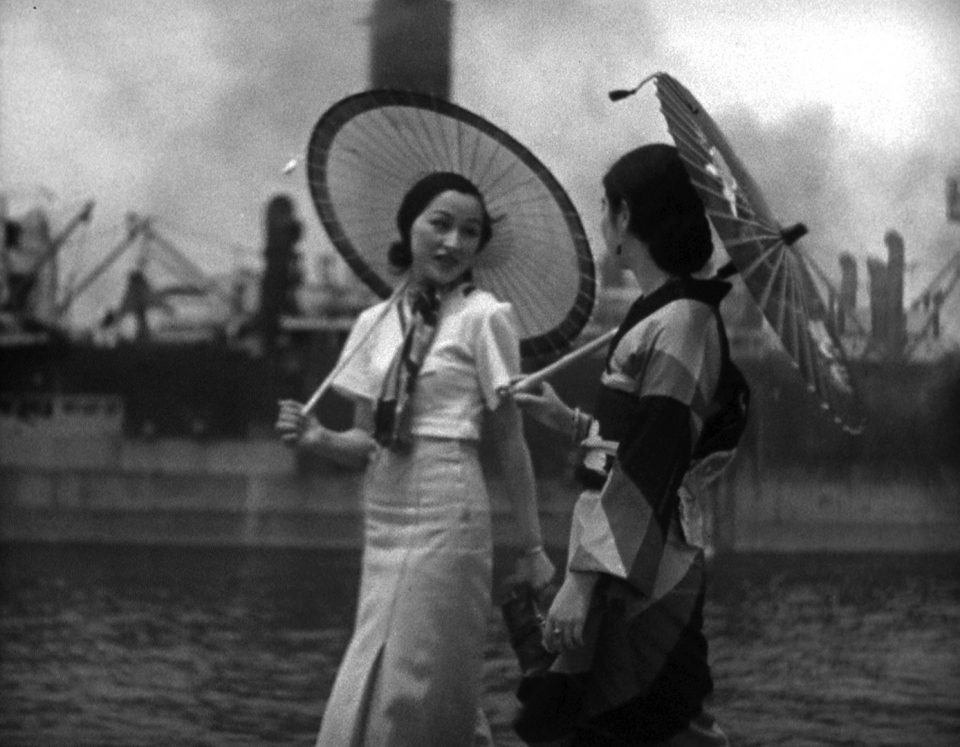 Legendary director Ernst Lubitsch shows in his silent satirical slapstick comedy “The Oyster Princess” that the follies of the rich make for excellent comic fodder.

Insanely rich heiress Ossi is the spoiled titular princess.  Her father Quaker is the incredibly rich Oyster King of America.  Ossi’s become incredibly jealous at learning the Shoe Cream King’s daughter has just married a member of royalty.   She demands her father find her a member of royalty to marry too. Prince Nucki gets picked even though he’s fallen on financially hard times and is not necessarily the marrying sort.  But a case of mistaken identity involving the Prince’s adjutant Josef eventually leads to Ossi’s learning a lesson about love.

Lubitsch clearly has fun here ridiculing some familiar attitudes displayed by those  possessing great wealth. The desire to have every need met without the need to lift a finger is best captured by the activities of the Oyster King’s personal servants.  This quartet of servants do everything from brushing Quaker’s hair to lifting a cup of coffee to Quaker’s lips. The wealthy’s “I want it now” mentality also gets ribbed by Ossi’s threat to trash the Quaker mansion because a royal husband has not been found after an hour-and-a-half.  The fondness for excess gets shown by the four different armies of servants catering to dinner party guests. One army serves the food, another pours the meat sauce, and the final ones pour the wine. The attitude that anything, even a marriage, can be bought quickly comes through in Ossi’s early 20th century version of a Las Vegas wedding.  For the Oyster Princess, marrying royalty is about preserving social cachet.

Even the tendency of commoners to brown-nose royalty gets nicely ridiculed.  The matchmaker meeting Prince Nucki lets his deference get in the way of noticing the Prince’s quarters has a mop for a royal staff and empty crates that serve as seating.  Ossi’s respect for royalty overrides her accurate first impression of Josef.

Enough visual comic sequences provide sufficient entertainment to make this title worth recommending.  Josef finds funny ways to pass the time when he discovers the Quaker waiting room is more than a metaphorical name.  It’s also to be hoped that the live accompaniment for this screening will make the foxtrot madness sequence fun for the festival audience.

True love winning out in the end may satisfy traditional audiences.  But inventively making fun of the wealthy makes Lubitsch’s silent feature timeless.

Kenji Mizoguchi and Yasujiro Ozu may consider fellow director Hiroshi Shimizu a genius.  But despite making 160 feature films, Shimizu’s name is generally unfamiliar to Western audiences.  The powerful Shimizu drama “Japanese Girls At The Harbor” will help remedy that ignorance.

The harbor in question is Yokohama.  Shimizu’s camera captures the harbor as a working commercial port, with both cargo ships and passenger vessels plying its waters.  Yet the film also shows Yokohama to be a metaphorical starting point for people to head off to their destinations in life.

The titular Japanese girls are classmates Sunako and Dora.  Their routes to and from school give them good views of the harbor’s activities.  Yet when the film introduces them, the two girls are friends who haven’t made any plans for adulthood.

Motorcycle-riding bad boy Henry turns out to be the catalyst for the girls’ futures.  Both Sunako and Dora love Henry. Sunako may be more aggressive in wanting Henry but the feeling isn’t necessarily reciprocated.  That uncertainty leads Sunako to commit a terrible crime and subsequently disappear for years. When the love triangle reforms again years later, what will happen to the trio’s relationships?

The power of Shimizu’s film doesn’t primarily lie in seeing the love triangle’s final resolution.  Instead, it’s about the clashes of the different worlds represented by the three members of the triangle.  Dora obviously represents respectability and friendship. Sunako is socially ostracized for her crime yet yearns for the respectability of Dora’s world.  Henry might be externally respectable, but he has trouble resisting the siren call of Sunako’s world.

Shimizu also excels in his visual storytelling.  One of the best visual metaphors involves yarn tangled among Henry’s and Sunako’s legs to allude to their complicated emotional relationship.  Also, the way Sunako’s crime and its aftermath are depicted manages to be both horrifying and tragic.

But “Japanese Girls At The Harbor”’s most pleasurable virtue is its making Sunako more than a homewrecker.  She admittedly threatens Dora and Henry’s marriage in many ways. Yet she’s also a tragic figure who’s letting her life collapse around her out of confusion.  She doesn’t know how to make her yearning for a return to societal acceptance translate into action. Hanging onto her friendship with Dora and Henry makes her not a drowning person grabbing a lifeline but an anchor who threatens to bring ruin to two old friends.

While Shimizu will not deny his central trio’s emotional flaws, he makes the viewer love them enough to wish for a resolution to the love triangle where none of its three points wind up badly hurt.

Judging Francesco Bertolini and Adolfo Padovan’s “L’Inferno” according to modern day special effects standards is unfair to the film.  Digital special effects didn’t exist in 1911, when this first full-length Italian feature film was made. Also, the amounts spent then to make the film would be considered a drop in the bucket by today’s standards.  What matters more is whether the images of Hell’s nine circles presented onscreen still deliver the proverbial emotional punch. And the answer to that question is that they do indeed elicit strong audience reactions.

For those not familiar with classic European literature, this film adapts the Inferno sequence from poet Dante Aligheri’s famed “The Divine Comedy.”   The short version of the plot would describe the film as Dante’s tour of Hell under the protection of the poet Virgil. Their travels take them everywhere from the precincts of the connoisseur of sin to the circle of Hell where the punished have the soles of their feet set eternally on fire…and beyond.

Visual seamlessness proves less important in this film than emotional seamlessness.  In that regard, seeing people with their heads deliberately twisted backwards or people buried in flaming graves seem like signifiers of eternal disrespect for what these people were in life.

Score-settling, suggested by the presence of such apparently real-life personages as Filippo Argenti and Pier Della Vigna, may fly over the heads of modern-day viewers.  But the types of punishments inflicted on such people, such as being transformed into dense tangled branches or having to wear heavy leaden cloaks, need no explanation.

It can’t be guaranteed that this visual display of Hell’s horrors will push people to head to the nearest church and think twice about mocking God.  But it can be safely asserted that seeing a giant devil calmly munching on a soul for eternity as if it were nothing more than a feisty appetizer with kicking legs makes for a disincentive to take the Lord’s name in vain.

Unfamiliarity with the source material will undoubtedly leave modern viewers confused about the relationship between Dante and Beatrice.  But given that Beatrice successfully convinces Virgil to ensure Dante completes his journey through Hell safely, maybe explaining her appearance doesn’t really matter.

Good, evil, forgiveness and redemption all play a part in Karel Anton’s obscure Czech Republic gem “Tonka of the Gallows.”  Aside from being an object lesson regarding the punishment of good deeds, the film shows the unfortunately fatal effects of peers’ small-mindedness.

Admittedly, the film doesn’t start out that way.  Tonka returns to her home village from Prague after an absence of several years.  She has a job that allows her to buy her dear mother a shawl, a pepper grinder, and a tablecloth.  Yet the happiness of Tonka’s mother and potential boyfriend Janik is overshadowed by Tonka’s unwillingness to explain the precise nature of her  city job. Said job pays well enough, but the former country girl is still evasive regarding her job’s details.

It takes Tonka’s return to Prague for the viewer to finally learn the pretty Czech country girl works in a high-end brothel.  Inner shame makes her popularity among the patrons feel hollow. The unconcealed hostility of the comparatively plain-looking brothel workers also doesn’t make her work feel sweeter.  But Tonka’s decision to serve a condemned man’s last request winds up permanently changing her life.

Why does Tonka choose to spend the night with the condemned man while the other brothel workers cower in fear?  There are a couple of possibilities. At her core, the young woman has a compassionate heart, as seen by her love of animals.  There’s also a possible touch of nihilism in that Tonka already hates her job, so this night’s task is no more shameful than other things she’s done.  The film heroine’s initial fear, wonderfully rendered by Anton with an inventive use of shadows, soon gives way to providing sympathy and love to her “client” during his last hours on earth.  The end of the task makes Tonka feel she’s found personal redemption.

The film doesn’t quite make clear what makes Tonka’s kind act a source of mockery by others.  Is it superstition at fearing the condemned man’s fate will somehow pass from the prostitute to them?  Do other people now think Tonka has a weird sexual kink involving dying men? What ultimately matters to the film is that Tonka’s act of compassion ultimately turns her into a pariah with no future whatsoever.

Anton’s visual storytelling breaks the viewer’s heart in several places.  The sequence where the condemned man marches to his hanging captures how Tonka’s compassion allows him to fae his end with courage.  Rapid cutting makes the jeering Tonka’s subjected to feel like a new punishment from Hell.

Ultimately, it is Ita Rina’s astonishing performance as Tonka that gives Anton’s film its emotional heart.  Rina takes the viewer on her character’s heartbreaking journey from her failed attempt to put the past behind her to her descent into hardened cynicism.  When Tonka’s mask of bitterness slowly breaks at the end, it’s a joyous moment. Yet it’s also one whose timing will ultimately make the viewer weep.