Reviews From The 16th 3rd i Film Festival 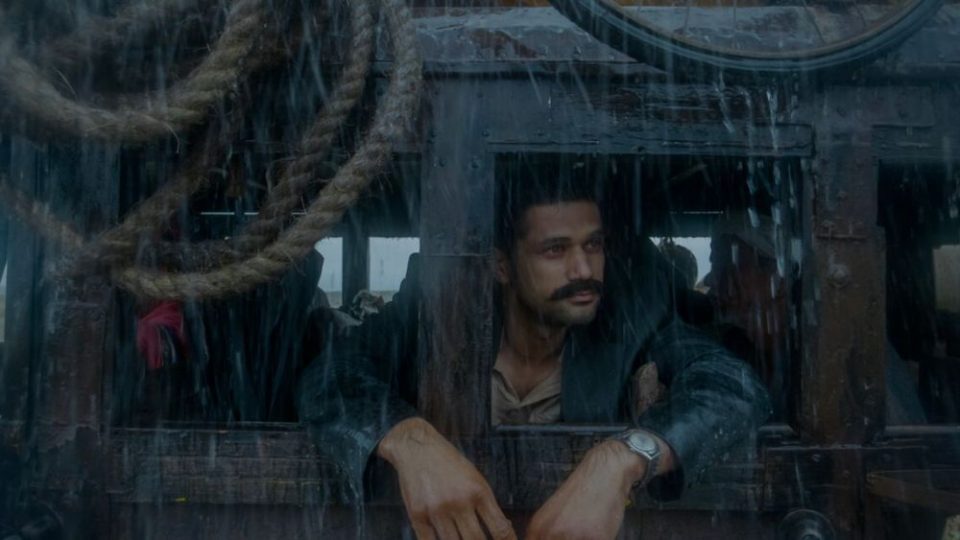 The annual 3rd i Film Festival returns this weekend with its 16th edition of films from South Asia and its Diaspora.   Of particular interest this time around are a couple of personal documentaries about two areas of South Asia unfortunately better known in the West as sites of political turmoil.  What both films share in common is a wearied recognition of the likelihood of future flare-ups of violence in these regions.

India and Pakistan are the areas visited in Sabiha Sumar’s “Azmaish: A Journey Through The Subcontinent.”  The director attempts through her wanderings to understand why the dream of a representative democracy in these two countries gave way to a slide into religious nationalism.   Accompanying Sumar on her cultural/political tour is actress Kalki Koechlin. Certain American audiences will recognize Koechlin for her winning lead performance in “Margarita With A Straw.”

Sumar, it turns out, has a personal interest in understanding what went wrong with the two countries’ attempt to install democracy.  Her father believed it was possible to transform a feudal society into a functioning democracy. The colors chosen for the Indian national flag represented his belief that all men were equal under the law.  Each of the three colors symbolized a major religious group. It didn’t matter that some religions possessed numerical superiority to other religions. What mattered was that under the law, all religions were treated equally.  So how and why did this experiment devolve into Hindu nationalism, continual poverty, and sexist violence?

Part of the problem turns out to be the usual clash between ideals and actual implementation.  The first true democratic elections didn’t take place until 1970, or 23 years after the country was founded.  Even then, a clique which included the existing oligarchs and the military insured that any power redistribution brought about by the election wouldn’t upset the existing order.  It also doesn’t help, as the viewer learns later, that many peasants continue the feudal cycle by making the man who owns the land they work on their representative in government. Perhaps it comes as no surprise that the Indian electorate balked at the idea of giving Indian Muslims the same political rights as Indian Hindus.

That refusal to give a minority population rights equivalent to that of the majority population happens to be the original sin of representative democracy.  Rather than embracing the credo of “all men and women are created equal,” both India and Pakistan seem to resemble George Orwell’s “Animal Farm” with its credo of “some people are more equal than others.”  Unfortunately for Muslims and women, they don’t count as equals of Hindu males.

Two disturbing incidents in the film crystallize these dangerous prejudices.  Koechlin deserves a medal for keeping a straight face on camera while listening to a Hindu political activist talking about the need for aggressive action to repel the Love Jihad.  The Islamophobic conspiracy, which this writer first learned about in Barbet Schroeder’s “The Venerable W,”  contends that Muslims would destroy Buddhism by marrying good Buddhist girls, converting them to Islam, and turning them into Muslim baby factories.  Substitute Hindus for Buddhists, and you have the Indian version of the alleged Love Jihad.

The other incident occurs during a fashion photo shoot in a rural village.  The men are happy to ogle the models taking part in the shoot. But when Sumar and Koechlin ask about having village girls be models, that idea is flatly turned down.  Appeals to social progress are met with a stated contentment with the status quo and a rejection of progress. The chilling moment when the male villagers revoke their hospitality and stand with arms crossed glaring at Sumar and Koechlin makes a viewer fear both women are one heartbeat away from stones being thrown at them.  Perhaps that’s why Sumar fails to get conclusive answers about the reasons for the country’s rise in incidents of violence against women.

Watching Sumar’s film, it’s chilling to see how deeply intolerance has been woven into the fabric of Hindu nationalism.  The very militant Hindu nationalist party known as the RSS counts over 61,000 branches across the nation.

Yet any film that takes a moment to celebrate a Laughing Club Of India can’t be totally obsessed with gloom and doom.  For Western audiences, “Azmaish” provides a couple of insights into Pakistan and Islam free from the fear of The Other.  If the Islamic religion plays a big role in Pakistan’s political life, that’s because Islam is the unifying force for the numerous tribes in that country.

More importantly, several Islamic scholars agree that the Taliban are self-appointed spokesmen for a false version of Islam.  Freely injuring or killing others brand the Taliban as fake Muslims. However, openly denouncing the Taliban is not the Muslim way.  Real Muslims trying to convert someone would teach what they feel is the path of righteousness. However, the Supreme Deity makes the final call on next steps if somebody rejects that path.

Sumar’s and Koechlin’s love for their country is not shaken by the end.  But the viewer senses their frustration with India and Pakistan’s failure to move forward socially and politically.

When filmmaker Jude Ratnam was five years old, he was told by his mother to be quiet and not to speak a word of Tamil in public.  This seemingly harsh advice saved Ratnam’s life, as he was on a train fleeing the rioting that would mark the start of the Sri Lanka civil war.  Now in the documentary “Demons In Paradise,” Ratnam returns to the place he fled as a boy in search of answers as well as confronting the scars of the past.

When Sri Lanka gained its independence, the Sinhalese decided to unleash their resentment of the Tamil, who were the favored tribe of Sri Lanka’s former masters.    In 1983, this resentment exploded into a night of Sinhalese mobs looting and murdering Tamils without any government opposition. A news photographer remembers taking a photo of three Sinhalese men and their victim, a naked Tamil.  The Sinhalese were calmly prepared to beat the Tamil to death within sight of a nearby police station.

The Tamil fled to a portion of Sri Lanka where they were the majority population.  There, the idea of Tamil Eelam soon took hold. In Tamil Eelam, Sri Lanka would be split in two, with one portion being a Tamil-only homeland.  A civil war followed, but it ended with the cessation of hostilities by the Tamil forces.

Ratnam’s film is partly a historical-psychological autopsy to understand why the Tamil dream failed.  In a search for answers, the director is accompanied by his uncle, who fought for the Tamil cause before eventually fleeing to Toronto.  As the uncle encounters old comrades and even opponents during Ratnam’s journey, some fascinating war stories are shared. One such tale involves an arms cache hidden beneath a group of fast-growing flowers.

At one point during the struggle, there were sixteen different Tamil resistance groups.  Yet the Tamil resistance as a whole ultimately collapsed. Two causes are suggested for that disaster over the course of the film.  One is the failure to build popular support. The Tamil Tigers rushed forth to attack the Sinhalese army directly rather than get the people behind them first.  The other problem was that the Tigers constantly decimated allied troops in hopes of consolidating its power. In one groan-worthy moment, it’s recounted how the Tigers murdered a guerilla force which counted 800-900 trained soldiers in their ranks….thereby losing the benefits of those soldiers’ skills and experiences.

Yet neither Sinhalese nor Tamils are entitled to claim the moral high ground here.  In such moments as Ratnam being nervous that his son speaks Tamil in public, it speaks to a lack of social harmony between Tamil and Sinhalese that’s one step away from a future riot.  On the other hand, the Tamil guerrillas killed people by such methods as burying unfortunates alive beneath a pile of tires and then setting the tires ablaze.

Quite a few underlit segments may frustrate some viewers.  It’s incredibly hard to tell what’s occurring in those scenes.  Then again, such underlighting might be forgiven as being a visual shorthand for how the Tamil have been symbolically forced underground by Sinhalese persecution.

Despite the failure of the civil war, it’s hard to see the Tamil gathering up their forces to make another push for independence.  Tamil Eelam may sound nice, but for the moment it remains a political pipe dream.

The gothic fantasy “Tumbbad” shows itself to be a gripping decades-spanning tale of unquenchable greed.  Directors Anil Barve, Anesh Prasad, and Sohum Shah’s story will slake the thirst of those waiting for the next Guillermo del Toro movie.

The film’s prologue introduces viewers to the forgotten god Hastar.  Despite being the favorite son of the mother goddess of all things, he hungered to steal all the wealth and all the food his mother generated.  Other gods would have killed Hastar for his greed except the mother goddess intervened. Her conditions for saving her son included his permanently residing in her womb.

Flash forward to 1918.  Young Vinayak Rao’s mother officially tends to a wizened woman who’s never awakened from her coma.  But on the side, the servant also serves as the mistress to the comatose woman’s son, the Sarkar of a crumbling and decrepit mansion.  Vinayak’s mother puts up with this horrifying work environment, hoping the Sarkar reveals the secret of an immeasurable treasure hidden somewhere in the mansion.  But when things go badly wrong, the boy’s not deterred from finding the treasure. But will Vinayak’s incredible greed become his eventual undoing?

The mansion is one of those visually imposing structures where shadows seem to be one of the major building blocks.  It visually appears to be a place of many secrets, with the plentiful patches of darkness suggesting that some pretty nasty stuff is hidden in one of its many corners.  Sunlight seems unlikely to have touched any of the mansion’s stones.

The mansion’s treasure epitomizes Indian cultural traditions better left in the past.  Later in the film, a friend of Vinayak’s talks about how suttee provides a favor to a widow rather than seem a barbaric custom.  There’s also grumbling about Gandhi’s pointlessly filling Indian women’s heads with talk of self-determination. The location of the mansion’s treasure avoids becoming a moment of heavy-handed symbolism.

The film does leave some points unexplained, such as the reason for the decaying bodies kept alive by Hastar. However, “Tumbbad” proves so engrossing that the viewer is primarily interested in seeing how this gothic fantasia will play out.  Fans of the Neil Marshall horror classic “The Descent” will certainly have a flashback while watching “Tumbbad”’s finale.