Reviews From The 15th Another Hole In The Head Film Festival 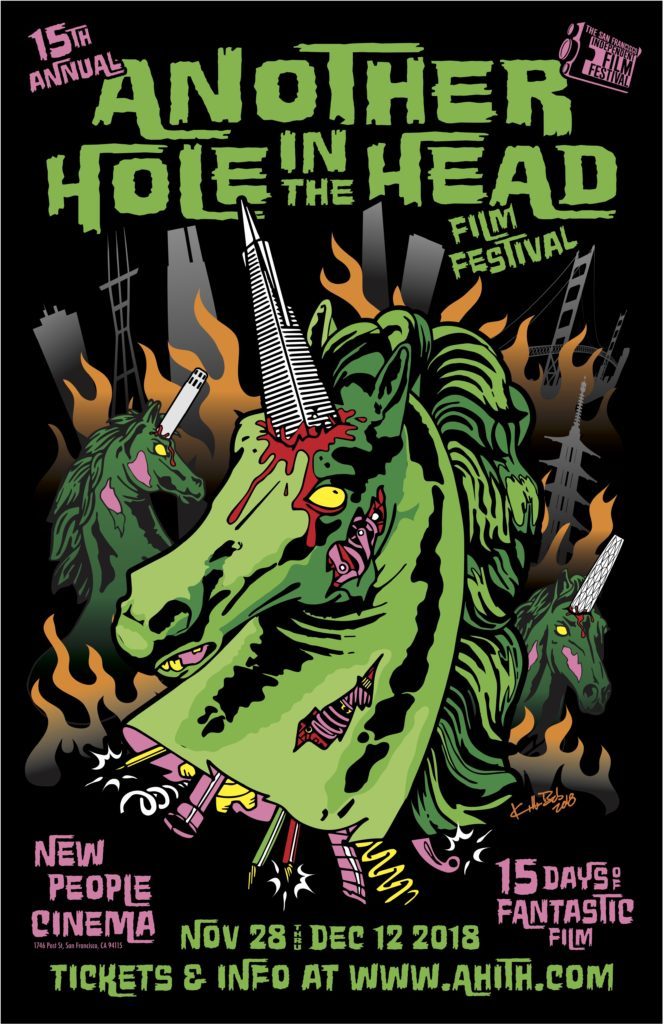 Oddly enough, the recovery from a romantic breakup storyline turns out to be a Mc Guffin in Another Hole In The Head Film Festival’s Opening Night Film.  Joe Badon’s “The God Inside My Ear,” which kicks off the 15th edition of San Francisco’s beloved quirky genre film festival, is more interested in compressing the viewer’s mind into a mental hacky sack and cinematically kicking it around for the length of its running time.   Whether the viewer will appreciate the experience depends on their individual tolerance for seeing often unexplained weirdness happen on the movie screen.

What sort of weirdness occurs in Badon’s film?  There’s an ear tattoo drawn on a hand. Masked figures in hazmat suits operate a control room which could be a grimier version of “Inside Out”’s personality control room.  A conspiracy involves a Telemarketer with a British accent and a telepathic garden gnome. And that’s only scratching the surface.

Supposedly these cinematic eccentricities form part of lead character Elizia’s experiences in trying to bounce back after the opening of an inner eye spurs boyfriend of several years Fred to dump her.  Yet the fashion store clerk’s efforts to find a guy for Valentine’s Day feels predestined for failure. The men Elizia meets as dating material come in flavors of either number-crazed nutters or a boringly clueless co-worker who doesn’t pick up that she’s not interested in him.

Badon tries using a clip from the horror classic “Carnival Of Souls” to foreshadow the film’s late twist.  Yet this reference feels like set-up for an arbitrary conclusion for the film rather than something organic to the story.

Then again, the amount of crazy moments large and small thrown into “The God Inside My Ear” makes it difficult to even intuit what a reasonable conclusion might be.  Badon seems too enraptured with tossing into the running time everything from a talking dog to an unexpected animated motorcycle sequence to a kidnapping livened by a hallucinatory special song for Elizia.

“The God Inside My Ear” certainly deserves props for needing only $8,000 to create a feature that can be characterized as a continual tumble down cinematic rabbit holes,  Yet it can’t be said that these economical efforts ultimately pay off with any moment that could fairly be classified as inventively startling.

A far more satisfying if ultimately troubling portrait of strange behavior comes in the Daniel J. Clark documentary “Behind The Curve.”  The film’s eccentric subjects believe that the Earth is actually flat and there’s an ongoing conspiracy to conceal this “truth.” What was once the province of harmless religious cranks has become something far more dangerous in the age of anti-vaxxer idiocy.

Clark’s portraits of his various Flat Earth advocates doesn’t go for the cheap shot of ridiculing them by highlighting their eccentricities.  Instead, he shows how utterly normal in some ways they are. Several of his subjects love their cats. One demonstrates remarkable hand eye coordination.  Another has built a beautiful motorbike with a hardwood exterior.

It’s even mildly touching seeing how some subjects have become emotionally attached to the Flat Earth conspiracy theory.  Principal subject Mark Sargent treats believing in Flat Earth as a personal paradigm shift and other Flat Earth believers as part of his found community.  A more evangelical subject sees accepting Flat Earth as opening up a whole range of other knowledge which has been derided or “ignored.”

But the illusion that Flat Earth believers are unconventionally helping increase the stores of the world’s knowledge soon gets dispelled.  Public disagreements over whether the entirety of Earth’s land mass is housed under an insanely gigantic dome feel more like the staking out of personal turf.  Wild character assassination taken seriously, such as Matt Boylan aka Math Powerland’s claims that Sargent is actually a deep cover movie studio executive, discredit Flat Earthers’ alleged intellectual seriousness.  Others tie their acceptance of Flat Earth into a distrust of established organizations such as NASA. Most damningly, the aforementioned evangelical subject sees the growing popularity of Flat Earth theory as grounds for publicly re-opening Biblical claims that the Earth is supposedly only a few thousand years old.  Sargent may see a growing belief in Flat Earth as a positive thing. But if thousands of people believe a foolish thing, it does not make the thing any less foolish.

The affability and sociability displayed by Sargent and subject YouTube broadcaster Patricia Steere makes their spouting of this ridiculous conspiracy theory particularly hard to stomach in the early parts of the film.   Their belief in Flat Earth may be less vile than, say, a bigot freely spouting racist comments. Yet their commitment to this utterly wrong idea compels them to reject anything resembling scientific authority in favor of unfounded claims that reinforce their personal biases.  Playfully calling their visit to a public NASA visitor facility as “entering enemy territory” isn’t that far removed from blunter Flat Earther paranoiac declarations that “NASA Lies.” What ultimately damns them is their rejecting any self-reflective doubt about their beliefs or their chosen community after some slanderous attacks concerning Sargent’s integrity and Steere’s alleged ties to the CIA.

Sargent’s mother may believe the air of authority displayed by Flat Earthers such as her son suggests “there might be something” to Flat Earth belief.  But the so-called authority being displayed is actually the Dunning-Kruger Effect in action. That effect describes a person’s falsely inflated belief regarding the superiority of their thinking ability and their depth of knowledge.  Sargent, for example, boasts about relying on “common observation” and not mathematics to conclude the Earth is flat.

In the eyes of people like Sargent, the public changes in previously accepted scientific consensus shows that science as practiced professionally is error-prone and even dogmatic.  That belief, though, is based on a fundamental misunderstanding about how the scientific process works. Science is not a process of creating answers set in stone. It’s a process of finding the best possible explanation at the time for all the phenomena observed and the data gathered.  If someone can successfully prove to other scientists that their explanation for observed phenomena and recorded data is more plausible than what’s currently understood to be true, then their explanation might eventually be adopted as current wisdom. Contrary to Sargent’s (unsupported) claim that scientists are “threatened” by Flat Earthers, it’s more likely that astrophysicists and the like haven’t bothered responding to Flat Earthers because they haven’t presented any anomalous information that would spark a re-think of currently understood knowledge.

Flat Earthers do not help their claims to credibility by rejecting the possibility of error in their theoretical assumptions.  Late in the film, a group of Flat Earthers obtain an incredibly accurate $20,000 gyroscope that they feel will prove the truth of their theory.  When the gyroscope confirms that the Earth is indeed round, the Flat Earthers do not even consider for a moment that their theory is wrong. Instead, they conclude some outside force is interfering with the gyroscope’s functions.  Yet accepting the possibility of theoretical error is a fundamental part of the scientific process’ DNA. Without that acceptance, what the Flat Earthers are doing is practicing pseudoscience.

The above thoughts are not intended to dismiss the idea of conspiracies ever happening in the world.  Such events as the GOP’s REDMAP plan to control state legislatures and the eventual overthrow of Salvador Allende show that conspiracies do occur and reach fruition.  But surely the resources deployed to make a conspiracy succeed needs to give the conspirators a plausible concrete benefit. The Flat Earthers are perfectly entitled to believe that NASA lies to the public.  But they’re not entitled to claim a NASA conspiracy exists without demonstrating what concrete benefit to NASA flows from such alleged lies.

Equally importantly, the Flat Earthers’ alternate model of the Earth falls apart once enough detailed questions are asked.   If a half-dome encases the Flat Earth, who constructed it and when? How can both meteorites land on Earth without damaging alleged dome integrity?   What mechanical or biological mechanism generates a breathable atmosphere for the living creatures living under this alleged dome? How can a Flat Earth generate the rotational energies needed to create hurricanes and other severe atmospheric phenomena dependent on rotational energy?  Hand-waving may be good enough to make a domed world scenario work in a science fiction story. But trying to explain real world phenomena requires a level of plausible technical detail that the Flat Earthers seen here seem incapable of providing.

“Behind The Curve” suggests that the Flat Earthers’ adherence to their beliefs is based more on emotion than hard evidence.  Without the celebrity of being a public advocate for the Flat Earth idea, Sargent would be an apparently unemployed middle-aged man living with his mother.  Clark does fall a little short in probing the roots of Flat Earthers’ hostility to scientific authority and what information sources Flat Earthers are willing to trust.  As the subjects seen onscreen definitely don’t appear to be polymaths, it seems that the echo chamber of fellow conspiracy theorists provide one of their main sources of authority or expertise.

One scientist speaking at an informal public outreach event talks of finding better ways of reaching out to Flat Earthers to nudge them away from their mistaken beliefs.  This is a noble and necessary aim. Yet such an effort would need to find what emotional needs are satisfied by believing in Flat Earth before making any sort of informational argument based on current knowledge.  The clock is certainly ticking as one Flat Earther happily mentions having grandchildren inculcated in Flat Earth belief.

Seeing the unbitten survivors flee for their lives from the ravenous zombie hordes is an expected sight in zombie films.  What distinguishes Sky Wang’s “Lost In Apocalypse” from other zombie films is its open rejection of the “every man for himself” mentality that’s embraced by other cinematic clashes with the walking dead.

In an unnamed mainland Chinese city, the zombie apocalypse has hit.  Trapped in a luxury hotel dining room are a group of people whose lives are interconnected.  They include ambitious thug Rich, his put-upon driver Jack, corporate head Director Wu, and aspiring TV newswoman Helen.  The ragtag group struggles to break out of the hotel and reach a possible place of safety. However, other humans’ greed and corruption prove just as dangerous as getting bitten by ravenous zombies.

While the film establishes in the opening minutes that the survivors are fleeing a zombie threat, how the zombie plague started is left vague.  There are ambiguous hints such as the sound of a serious truck collision. But Wang prefers to leave things at showing groups of people fleeing and other aftereffects of  something vaguely terrible having happened. What starts out as near-subliminal darting shapes soon gives way to such blink-and-you-miss-it moments as an unfortunate hotel security guard getting yanked through a doorway to his death.  This slow-burn approach pays off with a moment when something repeatedly tries to push through the luxury dining room doors. The viewer’s understandable but mistaken first thought is that the zombies have finally arrived.

Keeping the zombie threat as a growing background menace allows Wang to take time to make the surviving characters something more than potential zombie fodder.  Understanding who these people are before the zombies attack makes later dramatic developments acceptable as being in character rather than being a gratuitous plot complication.

“Lost In Apocalypse”’s zombie attacks may lack the grand chaos and desperation of “Train To Busan”’s assaults of the undead.  But what Wang’s film may lack in operatic chaos is redeemed by its blackly comic suggestion that the literal end of the world won’t deter people from acting on their worst impulses.  Yet that admission doesn’t undercut the film’s ultimately hopeful message of ensuring someone from the group survives by encouraging self-sacrifice in a life-threatening situation.