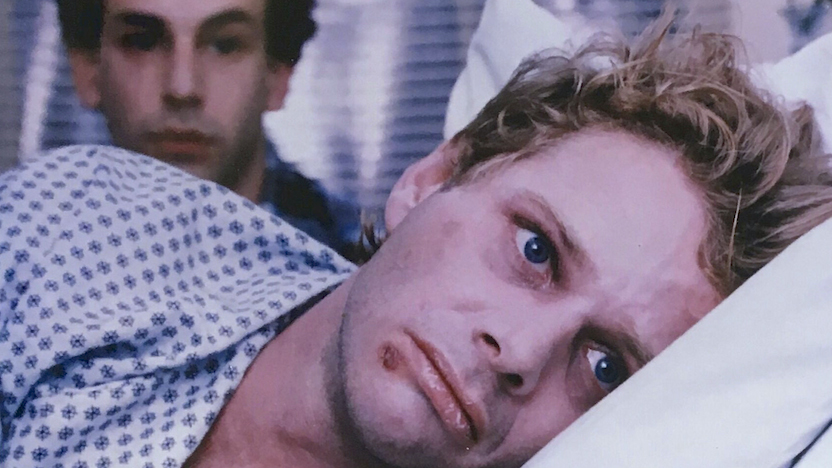 The Frameline LGBT Film Festival’s 2018 edition kicked off with the very timely Opening
Night documentary “Transmilitary.” Fiona Dawson and Gabriel Silverman’s SXSW Audience
Award Winner unerringly presented the human faces of a current hot button issue. For those
who fetishize tradition’s straitjacket above the freedoms of social change, this film will hopefully
spur a modicum of shame.

Religious fundamentalists certainly deserve such public calling out. Who has forgotten
fundamentalist derision of marriage equality as promoting “unnatural” Adam and Steve unions?
Seeing the honest and unspoken joy subject Laila Villanueva expresses to subject Logan
Ireland on his return from Afghanistan is not the freakish aberration pictured by such
transphobes. Their reunion falls into the long tradition of soldiers returning from combat to be
with their loved ones.

Anti-military types will also have difficulty warming up to “Transmilitary”’s subjects.
Besides Senior Airman Ireland and Corporal Villanueva, the film’s other subjects are Captain
Jennifer Peace and First Lieutenant El Cook. All of them love the armed services for reasons
ranging from continuing a family tradition to the familiar “feeling part of something bigger than
themselves.” Captain Peace has regularly received stellar evaluations. First Lieutenant Cook
has earned the respect and trust of his men.

Supporting open military service for transgenders need not mean supporting militarism.
Such advocacy can promote the larger goal of pushing past transfolks’ limited life and
employment choices demarcated by societal transphobia and ignorance. As an early title card
notes, the US military is currently the largest employer of transmen and transwomen. Yet US
armed forces have fallen behind the militaries of 18 other countries (and even the FBI and CIA)
regarding allowing trangendered individuals to openly serve.

The emotional price of the US government’s refusal to embrace open service plays out
in personal ways for the film’s subjects. Both Senior Airman Ireland and Corporal Villanueva
are stressed at the prospect of being ordered by military regulations to live the lie of the gender
identity they’d long abandoned. Captain Peace finds herself shut out of the officer parties that
allow for personal bonding and unit networking.

The subjects’ relationship with their parents offers more well-worn takes on transphobia.
First Lieutenant Cook’s mother needed to talk to another religious official before coming around
on acceptance. Corporal Villanueva’s mother recanted disowning her daughter thanks to a
supposed death by IED explosion. Senior Airman Ireland’s birth father appears only once with a
semi-embarrassed admission of balancing his pride in his daughter’s service with retaining his
friendships with his co-workers.

A publicly asked question at a high profile event became a game-changer on the
transgender open service issue. It began as a question asked by a friend of Senior Airman
Ireland of new Defense Secretary Ash Carter during his high profile visit to Afghanistan. The
optimism generated by the Defense Secretary’s semi-supportive response became cemented
thanks to Senior Airman Ireland’s very positive conversation with the man.

But as the bulk of “Transmilitary”’s drama shows, a huge gap exists between the idea of
transgender open service and designing the practical policies that make such an idea reality.
US transgendered military personnel organization SPARTA may help arrange and brief the
film’s subjects on meetings with strategic Defense Department officials. Yet all the preparation
and rehearsing in the world won’t necessarily overcome the overcautious and sometimes
maddeningly backwards questions asked by members of the Joint Chiefs Of Staff.

Widespread transphobic hysteria such as North Carolina’s odious bathroom bill certainly
does nothing to improve the Defense Department’s deliberation process. In a particularly
hiss-worthy moment, a Family Research Council spokesman publicly blames the transgender
community for inviting transphobic hysteria by being too uppity.

This callout to the old Jim Crow insult references “Transmilitary”’s biggest problem, its
lack of historical context.. Blacks, Japanese-Americans, women, and gays and lesbians are
groups that have been subjected in the past to discriminatory military service policies. Why has
the US military not learned from those earlier experiences and simply got ahead on the equal
treatment curve? Why are the same discredited arguments about unit cohesion allowed
credibility again against transgendered troops? Dawson and Silverman’s film offers no
answers.

One thing “Transmilitary” does do well is reminding viewers that Donald Trump is a
domination-obsessed liar. The man trying to rescind the Obama-era guidelines on transgender
open service once alleged he supported LGBTs by proudly holding a rainbow flag overhead at a
rally. Some viewers will understandably want to set that flag afire and shove it up Trump’s
posterior.

In a dysfunctional family’s semi-shabby Adelaide home, Maude lives with her youngest
adult child Kitty. She summons her unenthusiastic adult children home. For openly gay Eli, the
visit isn’t a choice. Besides lacking both home and job, his music career has become a terrible
joke. Far more successful globe-trotting Emma drags along affable husband Toby and
genderfluid daughter Cleo. Yet she still carries the scars of years-old resentments towards
Maude.

The adult children learn their mother plans to sell the family home for reasons unknown.
Before the sale can happen, Maude’s children need to get rid of their unwanted personal
belongings. However, Kitty is an inveterate hoarder. Eli questions Maude’s decision. And
nobody wants to talk about absent father Geoff.

The odd series title refers to the characters’ ambivalent feelings about the town of
Adelaide. In this town, everybody seems to know everybody or is close to doing so. On the
other hand, the place is unexciting enough that skateboarding without a helmet merits serious
attention from the cops.

There’s nothing wrong with highlighting a particular family member in each episode. Nor
is there a problem with making Maude’s family a bunch of quirky losers whose theme song is
the ironically titled “Winner.” The problem with “F***ing Adelaide” lies in its failure to make its
characters feel alive. Personality quirks such as Eli’s awful rock outfit or Kitty’s fascination with
cupcakes tell the viewers little about the larger personality behind the quirk. Maybe Kitty’s
night-time escapades might be funnier if her body language imitated that of a cat.

The surprise ending of episode five does indeed startle the viewer. However, it’s not
enough of a game changer to redeem the series.

Time may wither lives. But the passage of 33 years has not weakened the power of the
Arthur J. Bressan Jr. drama “Buddies.” As the 1985 edition of Frameline saw “Buddies”’
premiere, the 2018 festival presents a new 2K restoration by Vinegar Syndrome.

Many AIDS dramas have come down the pike. But “Buddies” did it first. Its dramatic
setup may have been the height of austerity. Yet the truths the film captured and dramatized
remain timeless.

In our present day of AIDS fundraisers and hospices for those who’ve contracted the
disease, it’s hard to remember that “Buddies” is set in a time when those institutions didn’t exist.
For David and Robert, the two characters who are the drama’s dramatic heart, there is no
dedicated infrastructure to help AIDS sufferers. Antiretrovirals didn’t exist. The federal
government put funding for AIDS research and treatment on the political back-burner. And
religious homophobes gleefully saw the disease as God’s retribution for the occurrence of the
Sexual Revolution.

David is part of what passes for AIDS support services at the time. He’s a volunteer
buddy, a companion for a person dying of AIDS. Robert is the first person he’s a
confidante/companion for.

If the two men don’t hit it off immediately, David’s inexperience provides only part of the
explanation. The other part comes from the two men’s divergent personalities. David is out to
his parents and has been in a relationship with Steve for five years. However, this
semi-introverted gay feels embarrassed encountering more extroverted members of the gay
tribe. Robert is one such extrovert who’s also a gay rights activist. However, he has been
abandoned by both family and lovers.

“Buddies” follows the evolving relationship between the two men in what’s essentially a
two-hander drama. Other minor characters either are heard offscreen or are never fully seen,
as if they’re outsiders to the world inhabited solely by David and Robert.

Yet the evolution of the main characters’ relationship steps firmly away from
sentimentalizing Robert’s suffering. Undisguised anger at the slowness of institutions that have
left him alone and slowly dying animates Robert’s frame. In one of “Buddies”’ most powerful
moments, David doesn’t understand why Robert practically screams himself out of breath while
reading a religious condemnation of AIDS patients.

Ultimately, it is “Buddies”’ embracing of anger that give it a staying power beyond more
sentimental AIDS dramas. In “Buddies,” AIDS is more than an ordeal to be individually
endured. It becomes a litmus test for personal humanity.

According to the program notes both Bressan and Geoff Edholm (Robert) would
eventually die of AIDS. But long before that happened, President Ronald Reagan would finally
publicly acknowledge AIDS’ existence five days after “Buddies”’ premiere.