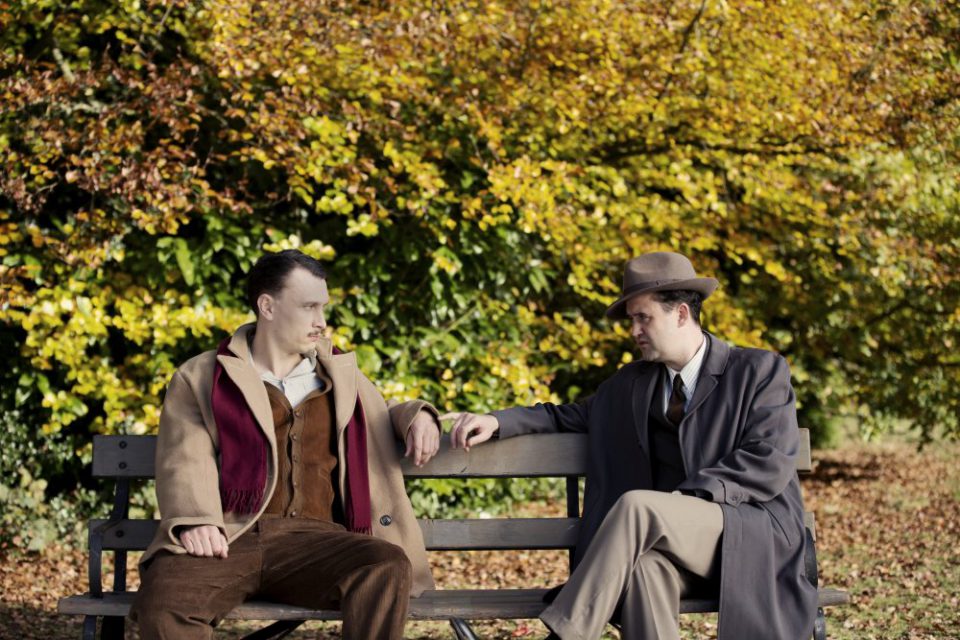 “Against The Law” may seem an odd choice for Frameline 41’s Pink Saturday evening programming.  Rather than contributing to its screening venue’s neighborhood bacchanalian air, Fergus O’Brien’s disturbing film takes a deep dive into the legalized persecution and torture of gay men practiced in 1950s England.  Yet from another angle, this BBC factual drama is unfortunately appropriate for this weekend.  It’s a powerful reminder of why successfully fighting Christofascists’ state-sponsored persecution of gay men is worth celebrating.

Journalist Peter Wildeblood’s journey from shy homosexual trying to find a hookup to early gay activist provides the film’s dramatic spine.  Those who take “love is love” as a truism will be shocked to see how somebody who followed that belief suddenly wound up becoming a notorious convicted criminal.  Wildeblood’s love affair with RAF Corporal Edward Mc Nally would lead to police blackmail, public disgrace, and a prison stay at Wormwood Scrubs.

The dramatic sequences of O’Brien’s film deliberately understate the horrors of that repressive time.  A rapturous love letter that liberates Wildeblood becomes valuable incriminating evidence to the police.  Wildeblood’s self-identification as a homosexual and his later statement about gay “types” is identity as filtered through Wildeblood’s unconscious acceptance of the popular assumption that gay sexual orientation is a disease.

But the sequences that will haunt viewers will be the interviews with actual survivors of the 1950s government persecutions.  They flesh out in queasy detail the horrors of that oppressive time.  One interviewee who succumbed to police pressure and gave up a lover’s name learned later the betrayed man committed violent suicide.  The blandly described “chemical aversion therapy” for homosexuality meant the less antiseptic practice of leaving its humiliated victims lying for days in self-induced pools of their own vomit and excrement.

Dark wood, battered building exteriors, and gray architecture may have been typical of this time period.  Yet those colors and images cumulatively create a sense of the social claustrophobia of 1950s England.

Daniel Mays’ Wildeblood may not be a fire-eating gay political radical.  But as the climax of Dr. Seuss’ classic “Horton Hears A Who” shows, sometimes all it takes is a simple shout to make the rest of a community’s voices be heard by others.

Another case of government persecution of gays and lesbians took place in Spain during the decades of General Franco’s rule.  Yet as Andrea Weiss’ documentary “Bones of Contention” shows, that persecution was part of a general campaign by the Spanish fascist to reverse the social and political gains of the Spanish Republic and crush any possibility of a revival of Republican opposition.

The success of Franco’s efforts is reflected in the fight against historic amnesia waged by the interview subjects of Weiss’ film.  Such people as Emilio Silva, founder of the Association for the Recovery of the Historical Memory, seeks to locate all the mass graves of the over 120,000 victims of Franco’s regime.  The bodies of those executed unfortunates deserve proper burials.  But a map marking in red all the known Franco-era mass graves shows the task’s enormity.  The plethora of markers makes Spain appear drenched in blood.

However, the present Spanish government sides with the Falangists and their descendants in hindering these efforts for the alleged sake of national unity.  One subject describes the regime’s extermination campaign as the perfect crime, where opponents’ lives and property were stolen and the perpetrators were never punished.   So until the crimes of the Franco era are publicly addressed by the government, full national healing is impossible.

The fate of legendary Spanish poet Federico Garcia Lorca underscores the necessity of not “leaving the past alone.”  As shown in the film, that philosophy in practice means ignoring the fact that Lorca was executed by Franco’s forces for being a prominent gay Spanish Republican.  Quotes of lines from such Lorca works as “Blood Wedding” and “Night of Insomniac Love” weave throughout the film to remind the viewer of the talent silenced by Franco’s fascists.

As mentioned above, other gays and lesbians were persecuted by Franco’s regime.  Gay men got sent to mental asylums for psychiatric torture while lesbians were subjected to forced procreation on demand.

Yet the government’s repression was not complete.  The Spanish government of Franco’s time thought same-sex attraction could be curbed via single-sex segregation.  “Bookseller” and “do you understand” became code words for finding fellow LGBTs.

Spain’s embracing of LGBT equality offers a cheering sense that Spanish society is trying to atone for the repression of Franco’s era.  It’s not a perfect transition.  Transgender cabaret artist Silvia Reyes hilariously recalls “respectable” Spanish gays and lesbians needing their own Stonewall moment to see that transgender activists displayed greater courage than them in the face of police intimidation.

An unnamed blonde junior high-school girl (Petersen) lives in a small California ocean-side community.  Her obsession with “Star Trek” in various iterations makes life bearable.  Her mother tends to rant about aliens and Satanic influences.  One day, mother and daughter take a cross-country trip with a route from the California coast to Arlington National Cemetery.  Before the trip ends, the little girl’s life permanently changes.

What makes Petersen’s film Frameline fodder is its central character’s first stirrings of sexual desires.  A male classmate comes off as crude and annoying.  In a grotesque bit of slapstick, seeing her mother naked turns the girl off the concept of motherhood.  One thing that sets the girl’s heart aflutter is fantasizing about passionately exchanging kisses with the “Star Trek:

The Next Generation”’s Deanna Troi character.  Another fantasy that excites the lead character is her imagining she’s a bearded man.

Most of the film is dialogue free.  Sound effects and occasional imagery perform a satisfying job of conveying the characters’ emotions.   The little girl’s anger at her mother for one of her crazy episodes is communicated by pairing the Godzilla scream with images of fierce beasts falling from the girl’s mouth.  But the most inventive dialogue-free sequence conveys the excitement of seeing Whitney Houston perform live without needing to use specific lyrics on the soundtrack.

“Torrey Pines”’ animated geometrical shapes evoke a sense of folk art brought to life.  From the animated ocean waves to a visit to Four Corners National Monument, the film’s visual look suggests the simple directness of the girl’s worldview.

Screening Mathieu Denis’ and Simon Lavoie’s avant-garde political epic “Those Who Make Revolution Halfway Only Dig Their Own Graves” on Pink Saturday actually makes sense.  Viewers simpatico to the film’s quartet of self-styled revolutionaries would share the characters’ disdain for the day’s mindless partying.  Yet this unexpected winner of the Best Canadian Feature award at the Toronto International Film Festival can’t be interpreted via the virtuous revolutionary/contemptible sheeple dynamic.

Those seeking the comforts of political upheaval as virtuous multiplex entertainment will be driven out of the theater swiftly.  The short attention span crowd is unlikely to last through the five minutes of black screen that opens the film.  The musical dirge that accompanies this sequence would be appreciated by Kurt Weill.   Slabs of leftist rhetoric left for long minutes on the screen will alienate viewers allergic to privilege challenges.  What the rhetoric doesn’t do, the constant assault of the film’s anti-heroes on notions of propriety finishes the job.

Those taking the plunge into this intellectually brutal epic should know the film is set in Quebec in the wake of the 2012 “Maple Spring” student protests.  Disgusted with the timorousness of the mainstream student protesters, a splinter cell quartet of hard-line revolutionaries hope to spark widespread unrest with various acts of civil disruption.   Yet despite the cell’s billboarddefacement or disruption of subway train schedules, ordinary people don’t wake.  Eventually, the splinter cell faces the problem of political awakening when their increasingly violent acts of protest get treated as a new species of spectacle.

Could the difficulties of the splinter cell come from its wrestling with the problems of living a truly revolutionary life?

The members of the splinter cell leave their old lives behind to embrace a revolutionary philosophy of living in the now.  A living situation transcending normal sexual boundaries and promoting communal decision-making seems helpful.  When the film’s main characters adopt the pseudonyms of Guitizia (Charlotte Aubin), Tumulto (Laurent Berlinger), Ordinne Nuovo (Emmanuelle Lussier-Martinez), and Klas Batalo (Gabrielle Tremblay), it seems to them as if they’ve achieved political rebirth.

Yet living as revolutionaries in the now proves more difficult than the quartet expected. Klas Batalo has a wrenching encounter with a former revolutionary whose younger political struggles left him a tired old man.  Leaving the past behind is far more complicated than Tumulto punching himself in the face repeatedly.

Despite her contempt for her mother, Ordinne Nuovo can’t bury her past as daughter Karine.

Most significantly, Ordinne Nuovo and her friends mistakenly believe that revolutionary disruption is an end in itself.  Their subway gas bomb and the opening billboard defacement do draw attention.  But they don’t advance a greater goal.  The viewer soon senses that this quartet seems incapable of conceiving of ultimate replacements for the current society they reject.

The quartet does succeed in finding ways of expressing their status quo contempt.  Giutiza picks a rather violent means of showing her disapproval of her father’s selling out his political ideals.  But Tremblay’s transgender revolutionary memorably disrupts societal expectations regarding sexual attraction and gender roles.

Denis’ and Lavoie’s very political epic propels continued cinematic loogies against the face of a self-satisfied social and political order.  For those ready to engage with the shortcomings of all the film’s characters, this film delivers a wrenching experience.