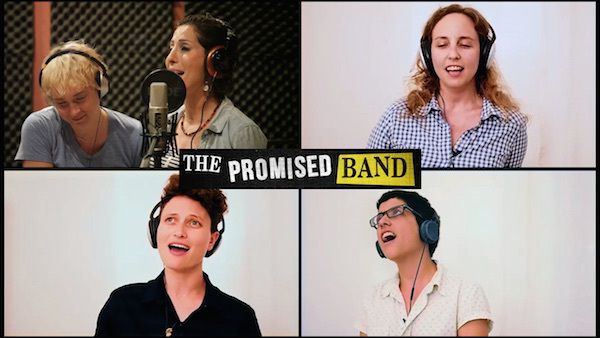 Included in a program of Dunne’s short documentaries is his latest work “Trump Rally.”  Set in a Las Vegas casino/hotel, the filmmaker talks to the mostly white hopefuls who have arrived for a Donald Trump rally in hopes of seeing The Donald in person.  But even with something like attendance lines, Trump supporters’ resentments get stoked.

Viewers will find a sick fascination in seeing the type of people who regard a narcissistic bully as presidential material.

The second program dedicated to Dunne’s work is the feature-length “Cam Girlz.”   Dunne’s subjects are cammers, women who sexually pose in front of a computer-attached camera for Internet viewers.  These models’ motivations range from income supplementation (e.g. covering the rent) to displaying body confidence.

Cammers’ working conditions feel superior to traditional sex work.  Because cammers work out of their homes and without apparent middlemen, they avoid exploitative sex club owners and violent predators.  Cammers’ relationship with their clientele is more interactive and creative, as shown by offerings ranging from a grab bag of sexual play options to performing the “Game of Thrones” theme on an accordion.  Finally, comfort with one’s body and sociability matter more than body shape, race, or even age.

The permanence of information on the Web does raise questions about how cammers can talk in the future about their performance footage to outsiders.  Perhaps Americans’ anxiety about sex needs to be lowered before cammers’ work can be treated as something mundane.

Roberto Minervini’s unnerving Cannes sensation “The Other Side” takes viewers from a rural Louisiana town’s strip club to right-wing militia exercises in a nearby bayou.  Minervini’s camera alternates between tender intimacy and disturbing voyeurism as it captures subject Mark Kelley whether he’s having intimate sex or cooking an illicit drug.  The film’s most unsettling moments, though, comes from its candid observation of a right-wing militia group.  Its activities are fueled by a mix of unapologetic racism and paranoia.

The artist-entrepreneur may dress up in medieval armor and dream of converting a boat into a mobile fantasy gaming venue.  Yet the director fails to make Pokorny an intriguing documentary subject.  The titular “Dwarvenaut” may not be dancing between ambition and self-delusion. However, Bishop fails to find some alternate character trait in Pokorny to engage viewer interest.

Pokorny’s passion for his hobby turned business is not at issue.  But had Bishop found and conveyed the price of Pokorny’s failing to realize his life-long passion project, the film would have gained the personal drama needed to attract an audience beyond the gamer crowd.

Inspired by a Jordanian peace activist, the director recruits friends and acquaintances on both sides of the Separation Wall in a project to lessen Israeli-Palestinian tensions.  She facilitates admittedly illegal social and politically taboo visits to the West Bank’s Area A.  To protect these burgeoning Israeli-Palestinian friendships from reprisals, Heck and the other women claim they’re in a nascent band.  But will a general lack of musical talent and unexpected political complications prevent these determined individuals from singing even one song together?

The film’s titles appear roughly pasted together in the manner of old punk rock band fliers.  But then Jen, Lina, Viki, and the other women’s semi-covert get-togethers are punk-like rejections of both Israeli and Palestinian authority.

“The Promised Band” touchingly follows the group’s attempts to rehearse and attempt performing a song together.  Engaging in this charade is shown to be a necessary evil in a land so divided that both Israeli and Palestinian institutions feel more dedicated to maintaining hostilities towards an Other perceived as an intruder on their land.  The enthusiasm of an orthodox rabbi for performing with the Palestinian Lina cools over concerns about loss of social standing.

Heck’s film shows that existing political divisions make more difficult individual achievement of a mutual understanding that might lessen Israeli-Palestinian tensions.  The division of the West Bank into restricted areas gets transformed from an abstract political problem into a difficulty with pronounced emotional consequences.

The Big Country song “In A Big Country” offers a melancholy commentary on the political tensions covered in the film.  What sort of country strips its people of their ability to keep their dreams alive?