Review: “She Stoops to Comedy” 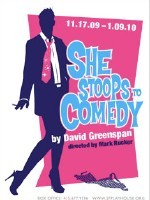 BEND OVER – YOU’RE NEXT! FOR LAUGHS, THAT IS!

This play is a whirlwind of observations of Theater, Theater folk and links to comedies of the past like “As You Like It.”

This is an exhausting play. Not for the audience – they were thrilled – but for the actors. It takes a really experienced bunch of actors to tackle this intricate play. And in this case – we are lucky, cause you could hardly wish for a better cast …

Here’s a little peek at the story. Alexandra Page (Liam Vincent – “Triumphant!”) is a Lesbian actress. Her career has careened and she is looking for a way to bring herself back into the spotlight. She decides to dress as a man and audition for the role of ‘Orlando.’ Page also just broke up with her live-in girlfriend who he discovers is auditioning for the same play that he his. Did he plan this? You’ll find out.

This high-voltage play is more than challenging. The actress (Amy Resnick –Scintillating!”) plays two roles – one a Lighting Designer and the Other a vain, pretentious actress, who seems to be so fragile that she might faint at any moment. Her big scene is when she is on the edge of the bed, moving from one side of the bed to the other and changing her persona.

One talking head is very ‘Butch’ – the other is the glamorous Diva who reminds of Vivian Leigh in “Streetcar Named Desire.” Or Norma Desmond in “Sunset Boulevard.” As Alexandria says: “The world’s a f%*king Drag Show.” Here’s another Alexandria spark: “Talk about chewing the scenery. I’ve seen her use a curtain rod for a toothpick!” Theater people are so kind to each other. At least to their face.

Alexandria gets ready to audition for the role of “Orlando” by pasting hairs on her/his arms. He quips “They once belonged to Laurence Olivier.”

This is an intellectual Roller Coaster ride that is thought-provoking. There will be times that you will get lost. As the dialogue switches from auditioning, to real conversation, the lines between actors and characters blur. Are they on the stage or off the stage? What’s real and who’s gay or who is not? Stay tuned.

You will figure it all out as you BEND over with laughter. It’s nutty delirious fun! This is Theatre at its most vibrant!

Also fantastic and unforgettable are Sally Clawson, Cole Alexander Smith, Carly Cioffi and Scott Capurro (who does an amazing Monologue) it’s better than a stimulus package!

EXTRA: Another Great set from the Talented Mr. English. Kurt Landisman works those lights like a Grand Piano and the Costumes by Valera Coble were drag-a-lecious! And of course, without the incendiary directing by Mark Rucker this play would not be as compelling and faultless as it is.