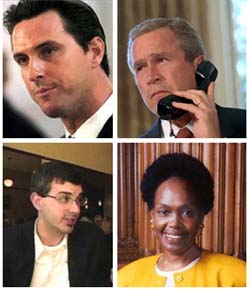 On Tuesday, February 28, 2006, the City and County of San Francisco became the first large municipality to call for the impeachment of George Bush and Dick Cheney, by a 7-3 vote. Supervisors Sean Elsbernd, Michela Alioto-Pier, and Sophie Maxwell cast the dissenting votes (Sup. Jake McGoldrick was absent for the vote). Sup. Chris Daly commenced his introduction of Agenda Item 27 with “I initially thought this … would be a noncontroversial piece of legislation. Perhaps it still is, maybe not-a-unanimous-vote piece of legislation. But if you remember when we took our oath of office we swore to uphold the Constitution.”

Sup. Daly again called attention to the strongest argument for impeachment, Bush lying to the American people about the reason for preemptively attacking Iraq based on forged documents regarding Saddam Hussein’s “alleged” intent to purchase yellowcake from Niger: “Bush knowingly included false and misleading evidence in his January 2003 State of the Union Address stating Iraq was seeking to purchase uranium from Niger to build nuclear weapons.” Sup. Daly also pointed to the Bush administration’s failure to respond to the imminent disaster posed by Hurricane Katrina and asked the other supervisors to imagine if something like that happened in San Francisco where “primarily African-American people, some of whom were sick, elderly, disabled [were] left there basically for five days to die.”

In his presentation on February 21, Daly outlined the financial and human cost to The City and did so again this past Tuesday, but he also detailed what the current financial cost to the country has been:

“What could we have done with $240-billion in the last few years? The United States of America could have fully funded global anti-hunger efforts for nine years and ended global hunger! We could have made sure every child is given immunizations for almost 80 years, hired over 4-million school teachers for a year, provided over 11-million students with four-year scholarships to public universities, fully funded world aid programs for the next 23 years!”

And Daly also pointed to the ongoing cost of the Iraq invasion by noting that Joseph E. Stiglitz, Columbia University economist and 2001 winner of the Nobel Prize in Economics, has stated that the eventual cost of the illegal war could top $2-trillion.

Again referring to Bush’s 2003 State of the Union Address, Daly pointed out that “This is a war that this country entered into under false pretenses, a case made by the President of the United States of America. He lied to the American people.”

Regarding the motivation for passing the resolution, Daly pointed to other local efforts and noted that in the 2006 full Board meetings to date he and his colleagues have passed 7 resolutions that were focused on state or national issues such as “justice or equity for Filipino World War II veterans,” supporting or opposing infrastructure bonds, and “weighing in on a Congressional bill on immigration.” Daly discussed the geographic distance of Rep. Nancy Pelosi, Sen. Barbara Boxer, and Sen. Dianne Feinstein and aptly noted that when the Board of Supervisors passes such resolutions, “These types of resolutions are helpful [to state and federal officials] to take the temperature of the constituency.” He also recalled 2004’s Prop N that passed with 63% regarding the withdrawal of U.S. forces from Iraq.

Sup. Daly then pleaded with his colleagues to pass the resolution so that we could move forward with the impeachment of George Bush and Dick “Scattershot” Cheney.

Sup. Elsbernd then spoke and requested that the paragraph regarding the Democratic Party taking back the House of Representatives be stricken, and Sup. Daly cooperated, but Elsbernd was acting in bad faith and voted NO anyway.

Board President Aaron Peskin then recognized Sup. Michela Alioto-Pier who droned “I don’t think that we need to be calling for the impeachment of President Bush and Vice President Cheney.”

Sup. Sophie Maxwell did not offer any comment with her NO vote during the meeting but she returned my phone call Thursday morning and offered the following. Speaking from anger and frustration regarding social injustices in our “liberal” City, she felt it was too easy to call for the impeachment of Bush and Cheney while African-Americans in San Francisco are being shot with illegal assault weapons and while children are achieving low grade-point averages in schools as a direct result of being forced to live in combat zones.

Several times Sup. Maxwell described the living conditions as third-world in nature in not only Bayview/Hunters Point but in the SROs where families are subjected to inhumane conditions. Speaking as an indictment of not only her colleagues but of herself, as well, and probably Newsom because of his lack of action, Sup. Maxwell declared “WE need to be impeached.” The supervisor’s NO vote was apparently meant as a protest given out of anger and frustration she was feeling during the meeting.

When asked if she would change her vote should Newsom veto Sup. Daly’s resolution, Sup. Maxwell didn’t think that situation would occur but when pressed she stated that “the situation would be different” and she would deliberate accordingly.

Let’s start with the San Francisco Chronicle’s rendition of this story. Was the Chronicle’s placement, considering the historic nature of this resolution, at the top of the front page? No. It made the front page, but Edward Epstein’s and Charlie Goodyear’s “S.F. supervisors ask lawmakers to impeach Bush” was relegated to the bottom right with a headline of about 18 point. It might as well have been buried in the business section.

While the reporters queried Mayor Gavin Newsom, the mayor treated the historic resolution like a right-wing talk radio host and the Chronicle quoted him as saying Sup. Daly’s resolution didn’t make it on the list of important things to sign.

Newsom didn’t indicate whether or not he would exercise yet another devastating veto.

What’s truly disturbing here is that Sups. Elsbernd and Alioto-Pier treat this resolution — and the heart-felt intent behind it — in a Republican-style careless, reckless, and wanton disregard for HUMAN RIGHTS. Is it a conspiracy to act as obstructionists to disrupt and, indeed, subvert the progressive principles of the honorable Chris Daly? Or is it that Elsbernd and Alioto-Pier just don’t care about human rights violations against predominantly people of color? Whatever their motives is almost irrelevant. But what IS relevant is that by their actions Elsbernd and Alioto-Pier have not just shunned progressive principles; by their actions or lack thereof they have essentially condoned the torture of fellow humans; they have condoned the Bush administration’s illegal and preemptive attack on Iraq which has caused the deaths of more than 35,000 men, women, and children; and they have exhibited a perversion of morality that says profits over people.

My telephone conversation with Sup. Maxwell yesterday not only energized me, but I wish she had spoken during the hearing about her anger and frustration regarding local social injustices. Her colleagues, particularly the conservatives sitting in the chamber, should take her passion as a warning sign that Sup. Maxwell has retapped her revolutionary spirit. Her no vote should be taken as an act of protest.

Speaking of the nightmarish possibility of a mayoral veto, the 7-3 vote is not veto-proof, and Newsom has up to 10 days to make his decision. If Newsom vetoes the resolution, it will be his most pronounced swing to the right. If he decides NOT to act, it also exhibits Newsom’s swing to the right but he can argue (unconvincingly to me) that the resolution didn’t need his signature and his failure to sign means he intended the resolution to pass.

But the resolution passes with Newsom’s signature, and in this case my feelings and thoughts about Newsom are irrelevant. What’s important is the passage of Chris Daly’s resolution, and the first stage of this ongoing national story will come to rest. The next stage of the story will commence to bring justice and peace to Casey Sheehan and the tens of thousands of American and Iraqi men, women, and children who are the victims of who I consider to be the biggest mass murderers of the 21st Century. And our City becomes the first major metropolis to call for the impeachment of George W. Bush and Richard B. Cheney for their crimes against humanity.