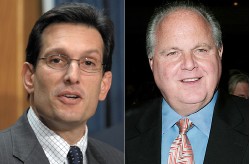 During his inaugural address, President Barack Obama told the Muslim world: “we will extend a hand if you are willing to unclench your fist.” He could just as easily have been speaking about Congressional Republicans. Obama has courted Republican support, and emphasized his openness to hearing their ideas (in sharp contrast to Bush’s ignoring Dems). But the GOP has ignored his overtures and kept their fists clenched. From delaying the inevitable confirmations of Hillary Clinton and Eric Holder, to trying (unsuccessfully) to kill the Lilly Ledbetter Fair Pay Act (S. 181), to the demand by GOP House Whip Eric Cantor that the stimulus package do more for the wealthy while eliminating funds for weatherizing low-income housing, Republican Congress members have already demonstrated a preference for opposition and obstructionism. As Rush Limbaugh exhorts his followers to ensure that Obama “fails,” Republicans are rejecting the electorate’s demand for change. Those fearing that the President would follow Bill Clinton’s “triangulation” strategy in his dealings with Congress should stop worrying; such concerns already appear misplaced.

A common concern raised by progressives about Barack Obama was that he would be too willing to weaken proposals to secure Republican support. Barney Frank even publicly voiced this point last week, noting that while he was very happy with Obama, he felt that he might have an unrealistic view of Republicans’ willingness to support bipartisan solutions.

But polls have long showed that many voters were excited about Obama’s candidacy precisely because of his calls for unity, and insistence that we are not a nation of red and blue states, but are the United States. Obama’s stated willingness to work with Republicans has been very politically popular.

But it takes two to tango. And If the President did have an overly optimistic assessment of GOP cooperation (which I doubt), his first week in office likely dissipated such feelings.

In 1993, Bill Clinton came into office with strong Democratic majorities in Congress and a mandate to “put people first.” Conservatives recognized that passage of a universal health care bill, or any other meaningful legislation, would both boost Democrats and expand popular support for government programs. The GOP thus bucked the pundits, waged a war of obstruction against Clinton’s agenda, and seized upon public anger at the Democrats’ failure to implement their 1992 campaign promises to win back the House in the 1994 elections.

I’ve heard many pundits distinguish 1993 from 2009, arguing that Obama won a much larger electoral mandate, and that the public sense of crisis today greatly exceeds that of Clinton’s first year. This is supposed to explain why Republicans will seek to work with, rather than against, the President.
But as already has become clear, Republicans who defied pundits and triumphed through obstructionism in 1993 see a similar opportunity today.

Rush Limbaugh routinely gets his facts wrong, but he is not politically naïve. And you can be sure that he is aggressively promoting his view that he wants Obama to fail because he and his allies think that obstructionism is the best — if not the only — strategy for deflating Barack Obama.

When your political party depends on people distrusting government, people-serving programs must be opposed at all costs. And Limbaugh and the Republican Party realize that if the nation’s economy turns around, energy independence is fostered, and the United States becomes more popular and effective internationally, it is Barack Obama and the Democrats, not the GOP, who will get the credit.

The GOP’s obstructionist strategy has gotten off to the worst possible start. Consider:

After President Obama issued a pre-inaugural call for Republican input on policies and putting differences aside to pursue a common purpose, the GOP childishly delayed Hillary Clinton’s confirmation for a day and Eric Holder’s for a week.

All Republican Senators save Maine’s Olympia Snowe voted for amendments that would have killed the Ledbetter bill to help ensure equal pay for women, despite the certainty that the measure would pass and soon become law.

Republican House Whip Eric Cantor of Virginia, said to be among the party’s rising stars, publicly criticized the stimulus package in two ways that showed he is not ready for prime time.

First, instead of attacking the stimulus by picking on a controversial project like the proposed museum for organized crime in Las Vegas, Cantor focused on a provision for weatherizing poor people’s homes, saying it was a worthy goal but does nothing to create new jobs. He’s not only wrong on the jobs question, but such criticism simply reaffirms public perceptions of the GOP as out of touch with the needs of the working and middle-class.

Second, Cantor argued that the stimulus needed greater reliance on tax cuts. When pressed by MSNBC’s David Shuster why these cuts would work when the Bush tax cuts did not, Cantor’s only response was to repeat the mantra that tax cuts are the best strategy.

Cantor was pathetic. And a far, far cry from the effective sound bites and political framing of Newt Gingrich’s crew in attacking Clinton proposals in 1993.

Word got out that Obama told Cantor in his Friday meeting with congressional leaders that he would insist on giving $500 checks to low-wage workers who do not pay income tax—a position the GOP opposes—because “I won” the election.

Drawing a line in the sand over money for the working poor? Barack Obama has done something in his first week that Bill Clinton never did in eight years.

The Right Calls the Shots

Republican political strategist Mike Murphy was also on MSNBC last week, pushing his party to work with Obama to weaken Democratic Congressional proposals — i.e., to help the President revive Clinton’s triangulation strategy. But it should be obvious by now that smart political calculation is no longer part of the national Republican playbook.

This is a Party that went out of its way to alienate Latino voters for the 2008 elections, and to lose Colorado, Nevada, New Mexico, and Florida, despite knowing that Republicans lost House seats in the 2006 elections due to Latinos moving to the Democrats; in other words, the GOP adopted a bad strategy and then intensified it.

This is also a Party whose base never broke from George W.Bush despite his falling numbers, encouraging him to pursue policies the electorate strongly opposed.

In fact, to this day Karl Rove insists Bush did a great job as President, a delusion that is apparently shared by Republican congressional leaders.

Unclench their fist to accept an extended hand from Barack Obama? These Republicans see this as the ultimate capitulation — and are furious that Obama has made them look small-minded, unduly partisan and selfish by rejecting his overtures to work together for the common good.