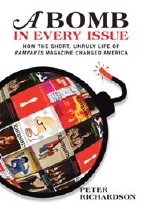 What do Robert Scheer, David Horowitz, Adam Hochschild, and Warren Hinckle have in common? All got their journalistic careers put on the map while writing for Ramparts, the legendary periodical that began in San Francisco in 1966 and lasted until 1975. Many younger activists are not aware of Ramparts’ legacy, which is why Peter Richardson’s new book, A Bomb in Every Issue, fills such an important gap in our understanding of the rise of both the New Left and investigative journalism. Begun as a journal for Catholic thought, Ramparts was soon transformed by Hinckle and Scheer into the nation’s preeminent media critic of the Vietnam War, U.S. foreign policy, and of the national security Establishment. Unlike the rest of the alternative press, Ramparts’ artwork and design matched the production quality of the mainstream media, which led Ramparts’ stories to be picked up by the New York Times and other outlets while similar information in The Nation was ignored. While trumpeting its legacy, Richardson does not shy away from the publication’s excesses; his book is thus an extremely honest account of a period whose activists and media have too often been romanticized.

In March 1967, a once obscure San Francisco-based magazine, Ramparts, had a circulation of 229,000, with over half the copies purchased from newsstands. And it achieved this public support not by promoting celebrity gossip or the latest sports news, but by running tough investigative pieces on the Vietnam War, Cuba, the CIA, and the John F. Kennedy assassination. Ramparts also probably did more than any publication to bring public credibility to the Black Panthers, and Eldridge Cleaver was a member of its staff.

How did Ramparts achieve high circulation while running a publication that challenged powerful government and corporate interests? Peter Richardson answers this and many other questions in his thoroughly entertaining, highly readable but not always uplifting book.

While Ramparts attracted many quality writers who went on to have distinguished careers, the publication’s success was primarily attributable to the genius of two men, Warren Hinckle and Robert Scheer. Scheer’s contribution will not be surprising to progressives, as he followed Ramparts with a distinguished career as national correspondent for the Los Angeles Times, and has long been widely recognized as among the nation’s most accomplished investigative journalists.

But many San Francisco activists will have a hard time reconciling the Warren Hinckle portrayed by Richardson with the champion of conservative mayoral candidate Frank Jordan in 1991, and the close ally of Jordan’s successor, Willie Brown. Richardson revives Hinckle’s historic legacy in this book, and makes a convincing case that Hinckle understood better than anyone in the history of alternative media how to get mainstream coverage for progressive stories. Hinckle understood that Ramparts had to look like a mainstream publication to get access into that world, and had to wine and dine editors and journalists to be considered a major player.

I worked closely with Hinckle on a long series of investigative stories for the San Francisco Chronicle in 1982. He was in his last days as a crusading journalist, and his legendary drinking and spending — an editor once publicly complained that “I gave Warren an unlimited expense account and he quickly exceeded it!” — was apparent. Richardson shows that Hinckle’s love of booze and of living the high life was present from the start, but that these qualities actually helped him attract big donors and media attention to what otherwise might have remained an obscure journal.

Richardson describes how Ramparts became a “must read” place for investigative stories. I was not aware until reading the book that Mother Jones co-founder Adam Hochschild was involved with Ramparts prior to his new publication’s founding issue in February 1976. In its glossy style, high production values, and focus on investigative journalism, Mother Jones adopted the best qualities of Ramparts without much of the silliness that came to typify the earlier publication in its later years.

Many prominent investigative journalists learned their trade at Ramparts, and this is among the publication’s most important legacies. It would only be matched by Ramparts’ willingness to address controversial issues otherwise ignored by the mainstream media. Richardson details how Ramparts’ exposes helped build progressive resistance to the national security establishment, raising issues about domestic spying and covert United States intervention abroad that had long been hidden by the mainstream media.

Ramparts and the New Left

What I found most striking about Richardson’s book is the parallel between Ramparts’ fortunes and that of the New Left. Both declined by the early 1970’s, with some activists moving into organizing within “the system” while others pursued conspiracy theories and sectarian agendas unconnected to political reality.

This latter group, including longtime right-wing writer and former Ramparts editor David Horowitz, found a home at Ramparts. As Ramparts editor, Horowitz became devoted to Black Panther leader Huey Newton, promoting him while excusing the thuggery and violence perpetrated by both Newton and his organization. Richardson exposes Horowitz and his right-wing and former Ramparts colleague Peter Collier as so politically naïve that their later turns to the right involved more than expiations for past sins; rather, it was a continuation of their lifelong political naïveté.

Like the sectarian elements of the New Left, Ramparts became so intoxicated by the big scoop or shocking expose that when these were in short supply, writers proceeded without sufficient facts. As Richardson puts it, “raising the ideological stakes” seemed the best way to keep the magazine going. This was akin to the Weatherman turning to bombs as a quicker path to social justice, but this did not spare the New Left’s — or the publication’s — demise.

The only portion of this very entertaining and provocative book I question is Richardson’s broad claims as to Ramparts’ legacy. For example, he argues that Ramparts “must be considered the origins of the Bay Area’s current media presence in contemporary politics and current affairs.” Yet the example he cites, Daily Kos, is entirely antithetical to Ramparts. Kos founder Markos Moulitsas regularly rails against the type of sectarian politics that Ramparts promoted, and unlike Daily Kos, Ramparts hardly promoted electing Democrats as the route to social change.

Similarly, while Richardson touts Ramparts’ role in helping transform the Black Panthers from “a handful of armed militants into internationally respected revolutionaries,” his depiction of the publication’s cover-up of Panther wrongs raises questions as to Ramparts’ role in propagating this phony image. My reading of the book showed a bunch of young, white, primarily Jewish radicals so excited to be around African-Americans spouting revolutionary rhetoric that they ignored Cleaver’s violence against women, Newton’s violence against friend and foe, and the group’s extreme detachment from social and political reality.

Finally, while Richardson noted in the Introduction that he was surprised to recognize “the key contributions made by women to the magazine’s success,” Ramparts was a male-dominated as other New Left groups. While women authored stories, the publication Richardson writes about was dominated and controlled by men.

These concerns aside, Richardson has performed a remarkable public service in reviving the history of a publication that changed the face of American journalism. Readers will be struck by the many prominent figures that got their start at Ramparts, and will be left wondering how the contributions of such a vital publication were largely forgotten until Richardson’s heroic retrieval.