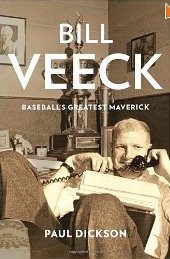 The late players’ union pioneer Marvin Miller was correctly credited this week with shaping baseball more than anyone else over the past four decades. From the 1930’s through the 1970’s, this honor goes to Bill Veeck. Veeck was baseball’s preeminent racial pioneer who made Larry Doby the American League’s first African-American player, and who gave Satchel Paige his first major league chance. He put players’ names on the backs of their uniforms, planted the ivy and installed the scoreboard at Wrigley, pioneered exploding scoreboards, gave 34-year old Tony La Russa his first big league manager’s job, and owned two of the only three American League teams from 1947–1964 that beat the Yankees for the pennant. Yet much of Veeck’s enormous contributions have been obscured by his putting a little person up to bat, and by a “disco demolition” night in Chicago that was not his doing (it was his son’s idea). Fortunately his remarkable accomplishments are now chronicled in Paul Dickson’s new book, Bill Veeck: Baseball’s Greatest Maverick.

When I was in high school I came across a book in a thrift store, Veeck as in Wreck: The Autobiography of Bill Veeck, written by Veeck and Ed Linn. That’s how I first learned of Veeck’s wild marketing schemes and baseball savvy, and though written in 1962, it remained the primary source on Veeck until Paul Dickson’s book this year.

It is long overdue. Despite his legacy, Veeck’s contributions are little known to today’s fans. This could be due to his greatest successes occurring with the Cleveland Indians and Chicago White Sox (rather than a New York City or Boston team), and to his longtime adversarial relationship with the baseball establishment—a trait he shared with Marvin Miller (Veeck testified for Curt Flood in his lawsuit against the reserve clause, further alienating team owners).

The PT Barnum of Baseball

Veeck’s father was President of the Chicago Cubs, and the younger Veeck got his start with that team. 1n 1941 be became owner of the Milwaukee Brewers minor league team in the American Association, and immediately began implementing the strategies to attract fans that became his trademark.

Veeck created the first ongoing Ladies Days, which under his ownership meant free admittance to games. Veeck emphasized attracting more female fans, believing that if those coming free for Ladies Day had a good time, they would become regular paying customers. Every time Veeck took over a team, his first action was to improve the women’s restrooms and to update the powder rooms. He held events like the Princess Aloha Orchid night, handing out orchids to the first 20,000 female fans to enter the stadium. Veeck’s efforts paid off in increased attendance wherever he went.

As an over 30 minor league baseball owner with young children, Veeck could easily have bypassed military combat in World War II. But he insisted on being sent to the front lines, where an infection ultimately cost him his right leg below the knee. Veeck had eight separate amputations on his leg, and was in acute pain throughout his life. He never complained, and even carved an opening in his wooden leg for use as an ash tray.

A typical Veeck game involved giving away lots of free prizes, discounted beers and hot dogs, the honoring of particular fans, and anything else he could think of to get fans in the door. But Veeck always put winning first, as his record shows.

Veeck tried to buy the Philadelphia Phillies in 1942, but what seemed to be a done deal was squashed after he naively leaked word that he planned to stock it with African-American players.

After returning from the war, Veeck purchased the sad sack Cleveland Indians in June 1946. He would transform the Indians into America’s team, as they won the pennant in 1948 and went on to win the World Series. It is the last title the team has won.

The 1948 Indians rival the 1955 Dodgers and 1969 Mets as the most iconic teams in baseball history. And the 1948 Indians were special because Veeck’s marketing led the team to break baseball attendance records, and his commitment to civil rights—unmatched by any major league baseball owner to this day—made Larry Doby the American League’s first African-American player in 1947. Veeck also brought Negro League legend Satchel Paige to the Indians mid-way in the 1948 season when no other team would give him a chance.

American League owners never forgave Veeck for signing either African-American player. They were mad over Doby because they deemed him unqualified to be in the big leagues, and were furious over Paige because it finally gave the pitcher the chance to prove that he was always as good or better than any white pitcher of his time (realize that major league baseball always denied the existence of a color barrier, absurdly claiming that blacks were not good enough to make the majors ).

In fact, as late as 1950 the Indians were the only American League team to break the color barrier (and it would be years later before the Yanks, Tigers or Red Sox integrated) Veeck integrated every level of the Indians stadium operation, from security, ushers, grounds crew, public relations. He even appeared in a 1949 NAACP recruiting poster with Paige and Doby. He arranged for the Atlanta Braves to put Paige on their roster so he would get a major league pension, was a close personal friend of Orestes “Minnie” Minoso, and was beloved by Doby to the end of his life.

Veeck sold the Indians after the 1949 season. Dickson claims Veeck needed money for his family (he was the last baseball owner who was not personally wealthy) and that he wanted to sell when the team had maximize value. The sale is one of many Veeck decisions that seem at odds with his character. He loved the Indians, and as the only owner willing to play black players, his team could have dominated the league through the 1950’s.

Dickson does not go beyond Veeck’s own explanations for the sale of the Indians and other curious moves, which separates this book from Jane Leavy’s brilliant, Sandy Koufax: A Lefty’s Legacy and Walter Isaacson’s equally stellar recent biography of Steve Jobs. These authors seek deeper, often psychological explanations for their subject’s conduct, so that the reader gains a deeper understanding that goes beyond an inventory of actions.

My conclusion is that Veeck constantly needed new challenges, even if this meant selling both the Indians, and then the Chicago White Sox after they shocked everyone by winning the 1959 pennant in the first year of his ownership. The need for excitement/new challenges also led to his unwise purchase of the St. Louis Browns at their 1951 nadir, his hiring of Rogers Hornsby to manage the team despite his known inability to get along with players, and a series of other seemingly rash moves, including his ill-fated return to White Sox ownership in 1975.

As with his friend Marvin Miller, Veeck did not live to see his induction in the Hall of Fame. He was elected in 1991, five years after his death. But as with Miller, Veeck did not need a plaque in Cooperstown to place him among the leading sports figures that fought for social justice in the 20th century. We owe Paul Dickson thanks for exposing Veeck’s legacy to new generations of baseball fans.

Randy Shaw is Editor of Beyond Chron. His favorite Strat-o-Matic baseball team was the 1948 Indians.