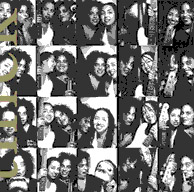 Imagine my surprise while shopping at Trader Joe’s in Emeryville this week, I overheard a young woman talking about the new Red Pocket CD! (I had just listened to them for the first time the other day!) Turns out it that young woman was none other than cellist and vocalist Marika Hughes of the Charming Hostess, just back from playing gigs in my old stomping grounds in D.C.! Well, if you missed the Charming Hostess at the Hemlock Tavern in SF this week, you have a chance to see two-thirds of them and a percussionist known collectively as Red Pocket, at the Starry Plough in Berkeley Friday night.

Known as the “dark underbelly of the Supremes”, Red Pocket is a bottom-heavy girl group where cello, bass, and drums groove under sassy vocals. Red Pocket’s genre-bending tunes will guarantee a soul-filled hoedown at the release party for their new CD, “Thick,” just released on the Tzadik label.

Singer Jewlia Eisenberg also plays bass and uses what has been described as “experimental vocal technique meets freak of the week”! After years of leading avant-pop girl-core extravaganza Charming Hostess, the songs she writes for Red Pocket are filled with the joy of romance. Cellist and vocalist Marika Hughes is classically trained, and now prefers to rock the low end! Her cello parts incorporate lyrical melodies, funky bass riffs and rhythm guitar punch. Outside of her work with Red Pocket, she plays with Two Foot Yard, Etienne De Rocher, and Eric McFadden.

Percussionst Scott Amendola plays with the likes of the Nels Cline Singers, TJ Kirk, and fronts his own band as well. Incorporating live electronics and hand percussion with the genius of the great funky drummers. He is well known throughout the Bay Area, and his work reminds me a little of the great David Van Tiegham, another percussionist who knows a thing or two about holding “estrogen together”.

I have only recently been introduced to the Charming Hostess/Red Pocket experience and I must say, I truly like what I’ve heard!