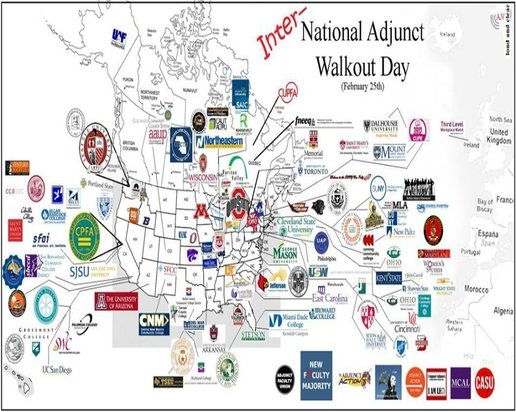 ‘Adjuncts get by on a shoestring,’ says one such professor. ‘It shouldn’t be this hard.’

Adjunct faculty from colleges and universities around the country are holding teach-ins and rallies—and some will walk off the job—on Wednesday, demanding fair pay and better working conditions as part of the first-ever National Adjunct Walkout Day.

“We’re striking today and walking out…to raise awareness nationally of the situation that adjunct faculty face across the country and to highlight our desire for higher quality education and more support for educators across the board,” Louisa Edgerly, adjunct instructor at Seattle University, told Democracy Now!

From California to Illinois to North Carolina, adjuncts and their supporters will lobby state legislators, facilitate community discussions, screen relevant films, and in some cases, skip classes, in an effort to protest increasing over-reliance on ‘contingent faculty,’ who currently make up an estimated 70 percent of instructors on campuses nationwide, according to a recent report (pdf) from the Delphi Project on the Changing Faculty and Student Success at the University of Southern California.

Generally speaking, the terms adjunct or contingent refer to full- or part-time non-tenure track instructors, most of whom do not receive benefits and are paid by the course at about one-third of the rate a tenured professor would receive.

Whereas the ratio of tenured or tenure-track faculty to adjuncts used to hover around 70-30, that proportion has flipped over the course of the last 30 years. The shift to a majority-adjunct model is seen as a way for allegedly cash-strapped institutions to save money, but the academic costs have been high.

The Delphi Project’s landmark report found that “growing reliance on adjunct faculty has a negative impact on student retention rates, successful transfers from two- to four-year institutions, student grade point averages, and graduation or completion rates, and this reliance limits opportunities for the faculty-student interactions that are so important to students’ development and success.”

In addition, according to the Service Employees International Union’s Adjunct Action project, “Increased reliance on contingent faculty with no job security threatens academic freedom as contingent faculty depend on the will of administrators and/or student feedback to get and maintain teaching positions.”

In an interview with The Chronicle of Higher Education, Yeshiva University history professor and academic labor expert Ellen Schrecker said Wednesday’s diverse range of actions was “absolutely a brilliant tactic because what adjuncts need to do is inform the general public, especially their own students, about their situation and the precarity…of their employment, and how it is impacting the education of most students, especially undergraduates, in a very negative way. The problem that adjuncts face in organizing, in improving their working conditions, is simply the utter unawareness on the part of the general public about their situation.”

To combat the perceived lack of public understanding, one professor made a slide show for educators to share with students: 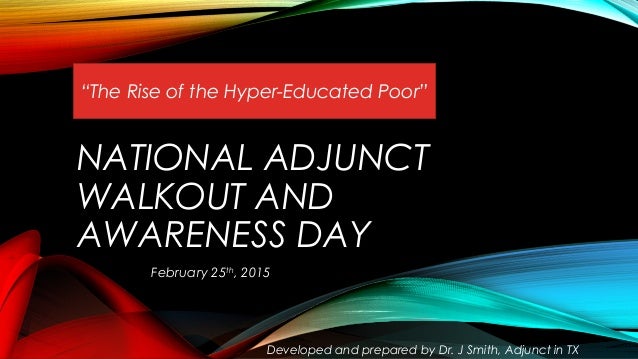 “Though they hold more than one degree—most community colleges require a master’s to teach—education hasn’t been a ticket to the middle class for most adjuncts,” Joseph Williams wrote for the website TakePart. “They’re occasionally called ‘the hypereducated poor’ because their paychecks can be so small that many qualify for food stamps. Because they’re only part-time employees, they usually don’t receive medical or dental benefits through the school they work for. It’s not unusual for adjunct professors to take on two or three different jobs, shuttling from one campus to another.”

“Adjuncts get by on a shoestring,” confirmed Cleveland State University adjunct Ben Stein, in an op-ed published Wednesday. “We make ends meet. But it shouldn’t be this hard—not when we’re working 40 or more hours a week. And it doesn’t have to be.”

That’s why adjuncts are getting out of the classroom. Just for a day.

Not because students don’t deserve every minute of instructional time they pay for, but because of what they do deserve: teachers who can focus on the hard work of great teaching, rather than hustling from one job to the next; teachers who can afford to put down roots and build a life here in the city rather than just passing through.

… We want contracts that last longer than 16 weeks. Students deserve a stable, long-term, expert faculty who are focused on teaching. The university system fails to consistently provide that. Every year, it fails to retain highly qualified, experienced teachers whom it forces to choose between the classroom work they love and the sustainability of a different career.