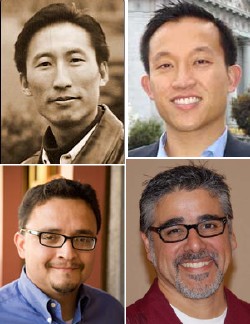 The SF Elections Department conducted its preliminary Ranked Choice Voting (RCV) allocation on November 7th, but it didn’t change the outcome in the four closest races for Supervisor. All candidates with the top “first-choice” votes – Eric Mar, David Chiu, David Campos and John Avalos – appear to have won, and voters unaccustomed to a relatively new system didn’t cast “strategic” votes when picking their second and third choices. The major exception was District 1, where Alicia Wang voters strongly preferred Sue Lee to Eric Mar—but there weren’t enough of those voters to change the outcome. There was no clear “strategy” in District 9, where Eric Quezada voters split evenly between David Campos and Mark Sanchez—and Myrna Lim voters in District 11 also split between John Avalos and Ahsha Safai. The latter defies ideology, but Avalos credits his campaign’s intensive outreach to Filipino voters. In District 3, ideology played virtually no role in RCV voter selections – but in at least one case identity politics did. Claudine Cheng voters preferred David Chiu over Joe Alioto, due to the emphasis Chinatown voters placed in electing a Chinese-American Supervisor.

Ranked Choice Voting (RCV) was created in part to resolve the common dilemma many voters have when going to the polls: (a) vote for the “lesser of two evils” because one of them will win, or (b) vote for your favorite candidate, and thus be a “spoiler.” RCV was established so you can vote for up to three candidates, ranking them from first to third. If your “first-choice” fails to get a critical mass of votes, your “second-choice” gets counted until one candidate wins a majority. Before RCV, voters chose only one candidate – and if no one received majority, the top two finishers would advance to a December run-off.

San Franciscans have only used RCV since 2004, and thus far only once—the District 4 election in 2006—did “second-choice” votes alter the outcome. In that election, Ed Jew came from behind Ron Dudum to win—because Chinese voters who selected other Chinese-American candidates for Supervisor picked Jew as their second choice. Jew’s campaign had intentionally urged Sunset voters to fill in all three choices (and to select all three Chinese candidates): a strategy that paid off handsomely. But with voters still getting used to the new system, most candidates have found such overtures rather tricky.

In fact, a cursory look at where “second-choice” votes of eliminated candidates went in various Districts suggests it was mostly random. Voters knew who they wanted to pick for their “first choice,” but few appeared to put much thought into their “second” or “third” choices – besides name recognition. Political observers who closely watched the various candidates had their “first” or “second” choices when they went to the polls, but the average voter did not. And while activists tend to base their RCV picks on ideology, voters who did make strategic “second” choices often had other factors in mind.

One exception where voters made clear ideological RCV picks was in District 1, where supporters of Alicia Wang preferred fellow moderate Sue Lee over progressive Eric Mar. Approximately 70% of Wang voters who cast a “second choice” went to Lee, whereas 30% went to Mar. Downtown spent substantial funds against Mar by highlighting his opposition to JROTC, and at least one mailer urged a vote for Lee or Wang – because they both support the military program. But while this narrowed the final gap between Mar and Lee, it appears that Mar still has enough votes to remain on top and win the election.

One problem with RCV is if voters don’t fill out all three choices – or if they don’t make one of their three choices a candidate who finishes first or second. In that case, the ballot gets “exhausted” and their vote doesn’t affect the final outcome. In many races this year (especially in Districts that had many minor candidates), a large number of ballots were “exhausted.” As voters become more accustomed with the system, however, they will hopefully catch onto the value of casting a “strategic” (and therefore meaningful) ballot.

District 9: the Mission and Bernal Heights

The most intriguing race that observers had wondered how RCV would play out remains a mystery. All three major candidates in District 9 – David Campos, Mark Sanchez and Eric Quezada – were Latino progressives who basically agreed on the issues. Two were gay and one was straight, while two were Democrats and one was a Green. A fourth candidate, Eva Royale, was more politically moderate – but had little chance of winning in a progressive District.

After the RCV calculation, Eva Royale supporters split their votes almost evenly among the three candidates. And when Eric Quezada was eliminated, his supporters also split their support down the middle between Campos and Sanchez. Campos, who finished on top, said he ignored any “second-choice” strategy because all three candidates were good. “It was harder to explain why people should rank you above the others,” said Campos, “so my strategy was to simply put on the best case as to why I was the best candidate.”

“The District 9 race never really broke through,” said Quezada, “because everyone kept saying all three progressive choices were good. We had to distinguish ourselves by saying we were different, but that didn’t get out.” Quezada said he didn’t pursue an RCV strategy with other candidates, and that Campos’ institutional advantages – the SF Democratic Party, Supervisor Tom Ammiano and the Bay Guardian – carried the day.

UPDATE: I couldn’t reach Mark Sanchez when writing this article, but got a phone call from his campaign this morning. According to Sanchez, they had several meetings with the Quezada campaign – and had a verbal agreement to urge their supporters to vote for each other as a “second” choice. But according to Sanchez, the Quezada camp backed out of the deal on the following day because they felt it would make them “look weak.”

The District 11 race had five major candidates, and RCV choices defied what most would expect. Supporters of Randy Knox – who came in fifth – split their votes among the four remaining candidates, with no discernable trend. Almost half of Julio Ramos’ votes went to progressive John Avalos – while about a quarter each went to moderates Ahsha Safai and Myrna Lim. Ramos is a Latino progressive on the College Board, so it’s no surprise that Avalos benefited more from Ramos voters than his two remaining competitors. But Ramos also ran a “law-and-order” campaign that might explain why Lim did so well.

Now here’s where it truly gets fascinating. Myrna Lim was by far the most conservative candidate in the race – she opposed the City’s Sanctuary Ordinance. She came in third place, and was the last candidate to be eliminated. If voters truly based their RCV picks on ideology, moderate Ahsha Safai would clearly benefit over Avalos – and probably win the election. But Lim voters split their RCV selections almost evenly between the two.

Was that due to random chance? Avalos disagrees. “We went after Myrna’s voters,” he said. “We had a strong Filipino base that worked directly with the campaign. We had a phone bank two nights a week in English and Tagalog. I was invited to a lot of events that even Myrna wasn’t at. The Filipino community had a real network involved in my campaign, and that’s really changed the activist base in the neighborhood.” In other words, Myrna Lim voters didn’t just base their RCV picks on a candidate’s ideology. A lot of them just followed which candidate had a base in their community.

Ideology also didn’t play much of a role in District 3 – the most crowded Supervisor race, where RCV machinations had the highest number of possibilities. I volunteered in this race for progressive David Chiu (outside of work hours), and personally asked voters who had committed to fellow progressives Tony Gantner or Denise McCarthy to make us their #2 pick. That didn’t have much of an impact, as supporters of each candidate split their votes almost evenly between Chiu and moderate front-runner Joe Alioto Jr.

Supporters of Mike DeNunzio – everyone’s favorite Republican – strongly picked Alioto as their second choice, but there weren’t many of these voters. Lynn Jefferson voters (a moderate who had Plan C’s endorsement) actually preferred Denise McCarthy by a large margin. Two factors might explain that: (a) they wanted another woman candidate, or (b) Jefferson and McCarthy were from the same corner of the District – Telegraph Hill. In each scenario, ideology did not play a role when voters cast their second or third choice.

Claudine Cheng was a moderate candidate who shared many of the same endorsements as Joe Alioto. But her voters preferred David Chiu by a three-to-two margin. During the final two weeks of the campaign, there was a concerted effort by community leaders in Chinatown that Chinese voters support both Chiu and Cheng – the top Chinese-American candidates in the race. “This would be the first time in Chinatown’s 150-year history that the neighborhood would be represented by a Chinese-American,” explained Chiu. So regardless of ideology, the community came together to support their own.

And the Vote-Counting Continues …

Initial reports that turnout in San Francisco was less than 50% – which some blamed for the statewide passage of Proposition 8 – are simply wrong. According to the Elections Department, that’s just how many people voted at the polling places on Election Day and used the electronic voting machines. Meanwhile, a record number of voters did vote-by-mail, early voting or turned in their absentee ballots at the polling place. My hunch is that an unusually long ballot prompted people to skip the long lines and vote absentee.

Of course, it also means a lot of ballots were counted over the last few days – and we’re still not done yet. By my calculations, the Elections Department has about 30,000 late absentees left – plus about 15,000 provisional ballots. Ultimately, that means voter turnout will be around 75-80% – so rest assured that San Franciscans voted in droves.

It also means, however, that some of the results have shifted since my last report.

For School Board, my co-worker Bobbi Lopez – who was in third place on Election Night – has slipped to fifth place (only the top four finishers are elected.) Incumbent Jill Wynns, who many presumed had lost, is now in third place – literally three votes ahead of Rachel Norton. Proposition B, the Housing Charter Amendment that was narrowly losing on Election Night, is down by four points. These results can change, depending on how many provisional ballots (which tend to be more progressive) get counted.