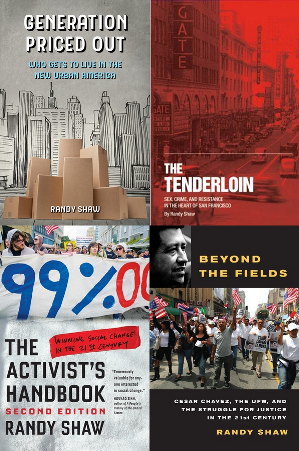 Get Inspired This Holiday Season!

Since 2008 I have written four books on winning social change. What led me to write four books in one decade? I owe a tremendous debt to the University of California Press for supporting my work.

Here’s how each book came about, starting with the most recent. All books are available online or on order from your local independent bookseller.

Generation Priced Out: Who Gets to Live in the New Urban America

Generation Priced Out focuses on solutions to the urban housing crisis. I specifically address how the nation’s most progressive cities—San Francisco, Los Angeles, Seattle and Austin and several others—maintain exclusionary and elitist land use policies that undermine the progressive values these cities publicly espouse.

This book was triggered by a phone call from my UC Press Editor Naomi Schneider the day after Oakland’s tragic December 2, 2016 Ghost Ship fire. I was bemoaning how artists and others priced out of San Francisco died because they could no longer find safe and affordable housing in Oakland. Naomi asked if I wanted to write a book about this.

I sent UC Press a proposal that differed from all previous books about gentrification. Generation Priced Out highlights homeowners, not developers, as the leading agents of gentrification. It targets zoning and land use policies, rather than new housing development, as driving displacement and the upscale transformation of neighborhoods.

When the book came out in November 2018 nobody was talking about a generational divide over housing. Now there is widespread discussion about boomer-dominated homeowner groups clinging to exclusionary zoning and worsening climate change by forcing workers into long car commutes.

In writing about over a dozen cities I also discuss a lot of pro-housing activists and politicians, such as Minneapolis’ Lisa Bender, Austin’s Gregorio Garcia, and San Diego’s Maya Rosas to name a few. This was before they received much wider media attention.

Generation Priced Out explains why cities must join strong rent control and just cause eviction laws with increasing supply. My support for this combination is unusual among those identifying as progressives, but it is the only way for cities to stop pricing out the working and middle-class.

The Tenderloin: Sex, Crime and Resistance in the Heart of San Francisco

After working in the Tenderloin for 27 years, in 2007 I initiated an effort to have the Tenderloin become a National Historic District. As I learned more about the area’s history I began working toward opening a Tenderloin Museum. Opening a museum required me to recover the lost history of the Tenderloin, whose longtime success had nevertheless kept it out of nearly all San Francisco history books.

So as I uncovered the Tenderloin’s lost history for the museum I felt that my findings should also become a book. The book remains the definitive history of what was long one of the nation’s great neighborhoods (if you think that is an exaggeration, read the book and/or visit the Museum and you will see why the historic Tenderloin deserves the accolades).

The book includes 118 photos in the book which really helps convey the Tenderloin’s past. The book goes through 2015, and particularly covers the most common question I am asked: how did the Tenderloin avoid the gentrification that even many progressives in the 1980’s felt was “inevitable”?

Read the book and find out.

The Activist’s Handbook: Winning Social Change in the 21st Century

The original version of this book came out in 1996. Howard Zinn described it as “a unique book, wise, realistic, and enormously valuable for anyone interested in social change.” I rewrote roughly half the book for a new edition in 2013 so that it includes activist events like the Occupy Movement and includes an entirely new chapter on how activists should use social media.

I wrote this book after going through boxes of newspaper clippings in my office and thinking that the lessons from these struggles would be of valuable to other activists. I had never considered writing any book but liked the idea of this one and UC Press Editor Naomi Schneider agreed.

That’s what The Activist’s Handbook is all about. It offers case studies of winning and losing campaigns, and shows which strategies are most and least likely to prevail. I discuss campaigns around rent control, homelessness, disability rights, environmental justice and organizations like the PIRG’s and ACT Up.

Activists’ most common mistake? Subordinating their agendas to the needs of politician “allies.” The book has an entire chapter on how to deal with politicians after you work to elect them.

Beyond the Fields: Cesar Chavez, the UFW and the Struggle for Justice in the 21st Century

This book also was initiated by a phone call from Naomi Schneider. She asked me who I felt deserved a new biography and I said Cesar Chavez. I had a very specific book in mind. It would tell the story of what UFW activists did after leaving the farmworkers movement, and show that the true legacy of Chavez is not found in the current UFW enrollment numbers but rather in the work of the amazing organizing cadre the movement trained.

The book revealed UFW alumni’s key role building the immigrants’ rights movement, boosting UNITE HERE, and creating the foundation for Latino voting power in California. Contrary to popular mythology, Latino power in California was not spawned as a backlash to 1994’s Prop 187. As I show in the book, it happened because UFW alumni applied the voter outreach tactics of the farmworkers’ movment to Latino voters in California.

The late UFW alum Miguel Contreras (whose wife, Maria Elena-Durazo is a current California State Senator and whose activism with UNITE HERE is also in the book) and the late Fred Ross Sr. deserve far more credit for progressive politics in California than Prop 187. As I explain, California, Texas and Arizona all faced anti-immigrant initiative but because California had a labor movement impacted by the farmworkers, this is where Latino power exploded.

As you consider which books to read and give as gifts for the upcoming holiday season, I hope you will consider mine.