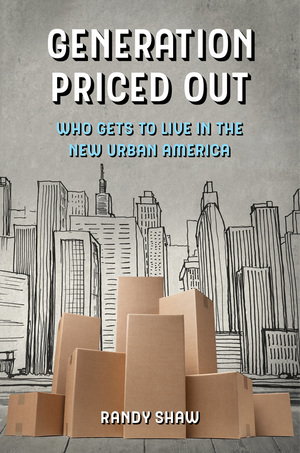 When I began writing my new book on the pricing out of the working and middle-class from urban America—Generation Priced Out: Who Gets to Live in the New Urban America— I had to start my discussion of over a dozen cities with San Francisco.  San Francisco has replaced New York City as the cautionary tale for other cities, and its rents and home prices now define urban unaffordability.

In 1979 I volunteered for San Francisco’s first broad-based rent control initiative campaign. I then co-founded the Tenderloin Housing Clinic in 1980 and have headed the organization since graduating Hastings Law School in 1982.  For almost 40 years I have had a front row view of the city’s rising unaffordability. The San Francisco sections of my book reflect my direct involvement with the city I love: legal representation of tenants, rent control and housing campaigns, and relationships with many San Francisco mayors, state legislators and supervisors. I also discuss neighborhood battles to stop housing, the war on live-work lofts, and the transformation of the city’s housing culture under former Mayor Ed Lee.

San Francisco has the strongest tenant and rental housing protections of any major city in the United States. Yet a new generation of working and middle-class residents has been steadily priced out. This says to me that protecting existing residents alone is not enough for ensuring the city’s long-term diversity and inclusion. San Francisco’s multi-decade failure to build anywhere near enough housing to meet jobs and population growth must be reversed.

Generation Price Out  tells the stories of the people on the frontlines of the San Francisco housing crisis. Tenants like Teresa Dulalas who joined with her family in battling Ellis Act evictions for fourteen years, and Lola McKay who died while fighting to keep her home of fifty years. I describe the Mission’s struggle against displacement and gentrification, and activists’ successful use of confrontational tactics to win community benefits.

The book describes how opposition to a Noe Valley remodel turned a young woman named Laura Clark into a key YIMBY leader. I show how neighborhood activists have seen their own home values rise exponentially by preventing new housing. I also discuss San Francisco’s generational divide over housing, where boomer homeowners stop new apartments in their neighborhood and then blame millennial tech workers for the skyrocketing housing prices resulting from this lack of supply.

I also tell the story of builders like Joe Cassidy and Sean Keighran. They and other builders felt treated like criminals in San Francisco—-publicly attacked for the “crime” of trying to build middle-class housing. Cassidy began building in the 1980’s when there was little demand for new housing in the city. When the market expanded in the late 1990’s he found himself battling neighborhood groups opposed to new units.

The story of Keighran’s long effort to build two projects in lower Potrero Hill exposes all of the flaws of San Francisco’s housing approval process. San Francisco risks losing builders like Cassidy and Keighran at its peril.

I also discuss Mayor Ed Lee’s enormous housing legacy. Lee was the greatest housing mayor in San Francisco history, yet many wrongfully blame him for rising housing costs during his tenure.

I see San Francisco moving in the right direction about housing, though it must move faster and more aggressively. I’ll be talking about my book and the SF housing crisis at Books Inc. Opera Plaza on Thursday, November 15 at 7pm. For other scheduled book events including ones later this month in Berkeley and Los Angeles, go to the events page at GenerationPricedOut.com

I look forward to a great discussion and hope to see many BeyondChron readers there.