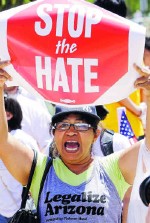 Ed. Note: Tomorrow is May Day, and thousands of immigrants and allies will march to protest Arizona’s draconian new law. The San Francisco march will start with a noontime rally at 24th & Mission, ending with a rally in front of City Hall from 2-4 p.m. The Oakland march will start at 1:00 pm at Fruitvale BART, and end at 3 in front of the Federal Building (1301 Clay Street.) Stay tuned for Monday’s Beyond Chron, when we provide coverage. The following piece analyzes what lies ahead in the courts for Arizona’s law.

“Driving while Black.” “Walking while Black.” These are phrases in the contemporary vernacular for racial profiling, which is defined as the inclusion of racial or ethnic characteristics in determining whether a person is considered likely to commit a particular type of crime or an illegal act or to behave in a “predictable” manner.

The Fourth Amendment of the U.S. Constitution guarantees the right to be safe from unreasonable search and seizure without probable cause. Since the majority of people of all races are law-abiding citizens, merely being of a race, which a police officer believes to be more likely to commit a crime than another, is not probable cause. In addition, the Fourteenth Amendment of the U.S. Constitution requires that all citizens be treated equally under the law. It follows then that it is unconstitutional for a representative of the government to make decisions based on race.

Interestingly, recent polls show that 71 percent of African-Americans, long-time victims of racial profiling, support the ethnic profiling of people who look to be of middle-eastern descent as do 66 percent of whites.

Many states, including California, specifically prohibit racial profiling of both motorists and pedestrians and prohibit profiling based on religion or religious appearance. Arizona has no such prohibitions.

It is not clear how the U.S. Supreme Court views racial profiling. Two recent cases suggest that the Supreme Court might disregard state and municipal efforts to circumscribe arbitrary police behavior motivated by racial profiling. In the 1996 case of Whren v. United States, Justice Antonin Scalia, writing for a unanimous court, found no impropriety, Constitutional or otherwise, when Washington, D.C. plain clothes officers in an unmarked car stopped two Black men for minor traffic violations in order to search their car for drugs. D.C. regulations specifically prohibit police officers from making traffic stops unless the driver was somehow threatening public safety. Remarkably, in upholding the validity of the pretext stop, Justice Scalia found the plain clothes officers had met the reasonable suspicion standard.

In the 2008 case of Virginia v. Moore, Justice Scalia again writing for a unanimous court, saw no violation of Moore’s Fourth Amendment rights against unreasonable search and seizure. The police officers in this case received a call that a man known as “Chubs” was driving without a license. What was not mentioned in the Court’s opinion was that the “Chubs” mentioned in the radio transmission was not Moore, but a man named Christopher Delbridge. This was noted by the Virginia Supreme Court in reversing the lower court decision. The police did not search Moore at the scene. Rather, they took him to his hotel room where they searched him and found crack cocaine. Moore is African-American living in Portsmouth, Virginia, where more than 50 percent of the population is Black. The Supreme Court refused to address the issue of racial profiling.

Finally, a third case has raised concern among civil rights advocates. In the 2008 case of Cerqueira v. American Airlines, Inc., the Supreme Court declined, without explanation, to hear the case of a man who was kicked off an American Airlines jetliner in Boston because a flight attendant thought he looked like a Middle Eastern terrorist. John Cerqueira is an American citizen of Portuguese heritage who was trying to fly home to Fort Lauderdale. Instead, he was escorted off the jetliner and questioned by police for two hours because American Airlines personnel thought his dark hair and olive complexion made him look Middle Eastern. Cerqueira sued American Airlines for discrimination and won. A federal court of appeals court reversed the lower court decision. It seems that airline safety trumped Cerqueira’s individual rights. Cerqueira is not alone in his plight. From 2001 to 2008, the Department of Transportation had received 953 complaints of discrimination against U.S. airlines.

As an aside, Section 412 of the Patriot Act permits the U.S. Attorney General to detain aliens he certifies as threats to national security for up to seven days without bringing charges. The standard for detention is the familiar reasonable suspicion standard enunciated by the Supreme Court in Terry.

What about Arizona’s immigration law? The law makes it a state crime to be in the state illegally. The law also requires immigrants to carry their alien registration documents at all times and requires police to question people if there is reason to suspect they’re in the U.S. illegally. It also targets those who hire illegal immigrant day laborers or knowingly transport them.

The law will probably be challenged on two legal theories: (1) that Arizona cannot enact its own scheme to regulate immigration; and (2) the law essentially codifies racial profiling. Article 1, Section 8 of the U.S. Constitution gives the power “to establish an uniform rule of naturalization.” And in the 1976 case of Hampton v. Mow Sun Wong, the Supreme Court ruled that the Congressional power to regulate naturalization includes the power to regulate immigration because it does not make sense to allow Congress to pass laws on how an immigrant becomes a citizen if Congress cannot determine how that immigrant can come into this country in the first place. Therefore, the argument goes, only the U.S. has plenary authority over immigration because it is a national policy that affects relations with other nations such as Mexico, whose government has denounced the Arizona law.

The Arizona law gives law enforcement authorities carte blanche to make enforcement decisions based on race and ethnicity or racial profiling. The law will likely be challenged on that basis as well.

There is precedent for striking down the Arizona law. For example, a federal district court struck down California’s Proposition 187, a 1994 initiative that sought to deny health and welfare benefits and public schooling to the undocumented. Federal district courts in Pennsylvania and Texas have issued similar rulings overturning local ordinances that prohibited undocumented immigrants from renting homes or apartments. However, none of these cases has been affirmed by a federal court of appeals and thus, have not reached the U.S. Supreme Court.

Unlike these other cases, Arizona targets illegal immigrants themselves, not just their benefits and it imposes criminal penalties for conduct – being in the state illegally – that is not a federal crime but is only grounds for deportation. Arguably Arizona is regulating immigration, an exclusive right of the federal government and therefore, is unconstitutional.

Arizona has about 1.7 million residents of Hispanic or Latino origin, or about 30 percent of the population. This means that potentially 1.7 million Arizonans are likely targets for walking or driving while Brown.

Ralph E. Stone is a retired attorney, who worked at the Federal Trade Commission.