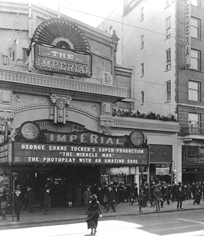 (Ed Note: Jack Tillmany is the author of Theaters of San Francisco)

So much has been written, and so many photographs taken, of the soon to be demolished Market Street Cinema, it’s time to set the record straight about its all too seldom remembered, but truly illustrious past as one of Market Street’s leading film venues.

It was opened on 22 December 1912 by David and Sid Grauman, a father and son business team, who already had a foothold in other Bay Area locations, such as the Maio Biograph down the street, still in operation today as the Crazy Horse. Movies were in their infancy and live vaudeville was the major attraction, soon to be tossed aside in favor of feature films, musically enhanced by Gino Severi and the Imperial Orchestra, and supported by a two manual Wurlitzer organ, which was installed in 1919.

In mid-1919, crowds line up for the The Miracle Man, the film that brought Lon Chaney to the attention of the public, soon to become one of the legendary Hollywood stars of the 1920s in such films as The Hunchback of Notre Dame and Phantom of the Opera. Jaywalking, as you can see here, was already established as a Market Street tradition.

On 28 May 1931, after an eighteen month tenure as the Premier, which introduced the now former Imperial as a talking film venue, a formal reopening as the United Artists established the identity by which it’s best remembered, and enjoyed its finest days, months, and years.

In 1943 a line of anxious ticket holders, heavily laced with sailors, wraps itself all the way around the corner onto Seventh Street, eagerly awaiting their first look at Jane Russell in Howard Hughes’ The Outlaw, considered to be quite controversial at the time, but pretty tame by today’s standards.

Operated in the 1940s and into the 1950s by the Blumenfeld family, who also controlled the Orpheum, the Esquire and the Tivoli in downtown San Francisco, as well as the T&D and Roxie in downtown Oakland, and sites in Berkeley, and other nearby communities, the United Artists, along with the Orpheum, became their “flagship” as they were once called, relegating less important films to the Esquire and Tivoli, but if the potential audience for a popular attraction, such as The Jolson Story, in 1946, was considered to be more than than one theatre could handle, it was shown simultaneously at the United Artists, Esquire and Tivoli, and did not disappoint, as shown here.

By the late 1950s, time, along with an estimated half million customers each year for over 45 years, had taken its toll and a much needed facelift, costing a reported $250,000, was given top priority by its new owner, Metropolitan Theatres Inc., of which Merrill C. Corwin was president. The venerable vertical which had always spelled out the full name “United Artists”, was replaced by a more modern version, which simply called it what everybody called it, “UA”. But the new marquee maintained the complete, fully spelled out name, a polite nod to its heritage. Inside, new, more comfortable, and better spaced seating reduced its capacity from 1200 to 1100, and a larger, wider, fifty foot screen was ready to welcome 70MM projection. In April 1959, the premiere of Some Like It Hot opened a new era that was to bring even greater popularity to this historic site and further brighten San Francisco’s Great White Way, as Market Street was then popularly called.

It was the era of roadshow films, prestigious and popular titles many of which are today considered the classics of their era, fifty years later. All seats were numbered, reserved, and purchased in advance. West Side Story opened in December 1961, and ran 46 weeks; it was immediately followed by Lawrence of Arabia, which opened in January 1963, and ran 47 weeks; The Sound of Music opened in March 1965 and ran 92 weeks until December 1966, the second longest run of any film in one theatre in San Francisco history, topped only by Around the World in 80 Days, which ran 94 weeks 1956-1958 at the Coronet.

But the times, they were a-changin’, and the UA’s days as a film emporium were numbered. On 15 October 1969, it was sold to the Loew’s conglomerate, who immediately renamed it Loew’s, abandoned the reserved seat format, and converted it to a more contemporary pop culture, where it became a haven for the new breed of immensely popular Kung Fu films and their legions of enthusiasts; less than four years later, Loew’s walked away from it and took their name with them. As of 13 July 1972, it became known as the Market Street Cinema, and for the next forty years operated as such, rolling with the times, which is what survival on Market Street is all about, the last chapter of its history which is well known to everyone. Sometime in February 2013, it shut down for the last time, and, despite the inevitable message on the marquee, “temporarily closed”, failed to reopen. Sic transit gloria mundi.