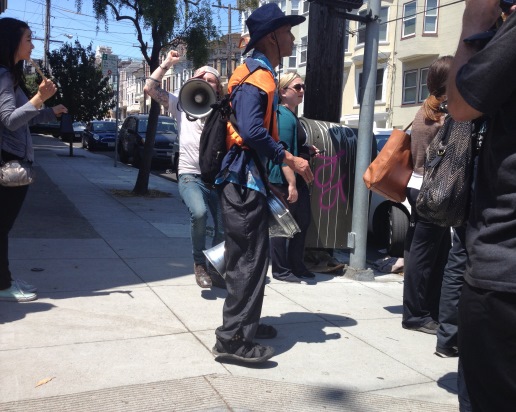 On July 29th, people protested together through North Beach, the neighborhood where poet and senior Diego Deleo has lived for 40 years. He  is being Ellis evicted in a neighborhood that is becoming a burgeoning “hot spot for Airbnb and also for evictions” says Andrew Szeto, Tenant Organizer at the San Francisco Tenants Union. Everyone met at 1937 Mason Street, an Ellis Acted building where tourist visitors are not likely to have met anyone, perhaps not even their hosts, as visitors encounter a “lock box” to enter, unlocked not with exchanged keys, but codes.

After the march, s Gullicksen “tagged” this building as an illegal conversion site, with a new neon warning sticker that reads “WARNING! The Apartments in this building have been illegally converted into hotel rentals. San Francisco Administrative Code Chapter 41A prohibits any San Francisco apartment from being rented for short term, tourist use. Your occupancy here is illegal. Please be advised that the illegal tourist rentals here at 1937 Mason St. will be shut down. If you leave the premises, be advised to bring any and all personal possessions with you as your re-entry into the illegal apartment may not be possible.”

Erin McElroy of Eviction Free San Francisco and the Anti Eviction Mapping Project, which has been documenting illegal tourist conversion units, says to everyone at the protest “it is a beautiful thing that tenants are here to help other tenants.”

Jennifer Fieber, also of the Anti Eviction Mapping Project spoke to me about their documentation, “we found […] that there are multiple units through professional real estate brokers, it’s like big business for them; even Airbnb admits that about 50 percent of its revenue comes from condos.”

Carolyn Said, at the San Francisco Chronicle writes in “Window into Airbnb’s hidden impact on S.F,” that “Airbnb had 4,798 properties listed in the city. Almost two-thirds — 2,984 — were entire houses or apartments. Of the remainder, 1,651 were private rooms and 163 were shared rooms.”

Fieber continues, “Airbnb wants you to believe there is some kind of grey area but there’s not… “The thing about Airbnb is that they want you to believe that they are just people renting out these spaces to those who want to use it.” Carolyn Said also quotes the “charming” and comforting language in the listings. Cleverly curating borders, never taking them down.

Szeto said “the share economy is sort of co-opting of DIY ethos, a very anarchist way of living of mutual aid and support that isn’t based on commodification and capitalism and so the very fact that the rhetoric discourse Airbnb chooses to use about sharing is sort of negates erases that long history of mutual aid that has exists in indigenous communities, anarchist communities, communities of color the very communities where sharing is a part of its culture and heritage, eldership… and the cooptation of the tech industry of this long standing way”

Szeto continues, “you have to wonder what is in it for them, and in many ways it’s money. They make lots of money doing it, they don’t see a problem with it they see it as innovation, as progress, they see it as challenging the high cost of the bureaucratic, in this case the hotel industry, with car sharing, with Uber and Lyft, it’s challenging the bureaucratic nature of the Taxi industry.  It’s libertarian ethos which is not critical, it’s steeped in white supremacist framework.”

Gullicksen told me a story of some of the realities of living in the thick of this. “One woman who came by today lives right on Polk and Van Ness, 40 units and 15 units there are tourist-use and they have maids going to different rooms, people complain about people walking in the building with suitcases, almost expecting tenants to be carrying their bags and things.”

Theresa Flandrich, a resident and activist in the community, said “now with all of these strange people coming and going this is a residential neighborhood, this should not be, furthermore, because it is illegal, there is no documentation as to who and what they are, that is really scary as a parent today. I would be a city hall every day, and now I am speak for the very few families who remain in the neighborhood that that should not be.”

After the protest, promises to come back and putting up of the warning signs around the area, two visitors staying in the building approached the door when Flandrich compassionately informed them about the Ellis Acted building, noting seniors in particular. They nodded slowly entering the building.

Flandrich said, “in the encounter, I should have said that this is illegal, what they are doing is illegal, but I am so used to seeing tourists that I want it to be a pleasant experience, you know, and that’s why focusing on our elderly.”

Flandrich continued, “I have lived in the community for 32 years, I worked at Telegraph Hill Neighborhood center, so my introduction to the neighborhood was that you take care of people” 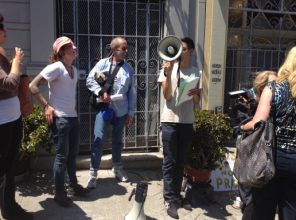 Flandrich adds, “but with the Ellis Act, there were 24 people on my street alone who received Ellis Act notices last year. 10 years ago it was the first time a building was on the market in 50 years […] “now for me to have an eviction notice and to be trying to find another place in my community and to use the relocation fee to be compete with others to be able to get a place within my community, this building three doors down from me, 4 units, is vacation rentals, two doors down is another building where one of the units is being used as a vacation rental. At the end of my block […] is an aid unit corporate rental and that one is owned by a guy named Gerald Balzer; it’s called Lombard Street Investments, but he has many street investment companies, and those people are here for three months, six months and then they leave”

“We formed North Beach Tenants Committee because too many neighbors were disappearing and they didn’t know that they had rights. Unfortunately we have not been able to put much time into organizing, because we’re have been too busy putting out fires” Flandrich said.