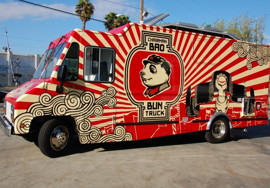 A proposed state bill by Assemblyman Bill Monning (Carmel) which originally sought to keep mobile food vending trucks from parking 1,500 feet from all K-12 schools, and which drew the ire of the burgeoning gourmet food truck movement, has been modified by its author.

An amended version of AB1678 now calls for a 500 foot barrier rather than 1,500 feet, and limits the scope of the measure to public schools; it also carves out a few exceptions including for trucks located on nonresidential private property, trucks at construction sites selling to adults only, and trucks at film sites. The new version of the bill specifically states that it will not displace local ordinances adopted prior to January 1, 2013, regardless of whether such ordinances are more or less restrictive than AB1678, and also states that it does not limit the ability of communities to adopt more restrictive measures after that date if they wish.

Last week the SF Board of Supervisors was set to vote on a nonbinding resolution from Supervisor Scott Wiener which would have condemned the original version of AB1678. I suggested at that time that the Monning legislation needed to be modified, and I am happy to see that he has done that. But I also wrote:

The vote on Wiener’s nonbinding resolution condemning AB1678 was postponed for a week at Wiener’s request. Now that Monning has shown that he is willing to amend his measure, Wiener needs to back off from his take-no-prisoners stance.